Carl Nassib doesn’t deserve this, but he can probably handle it 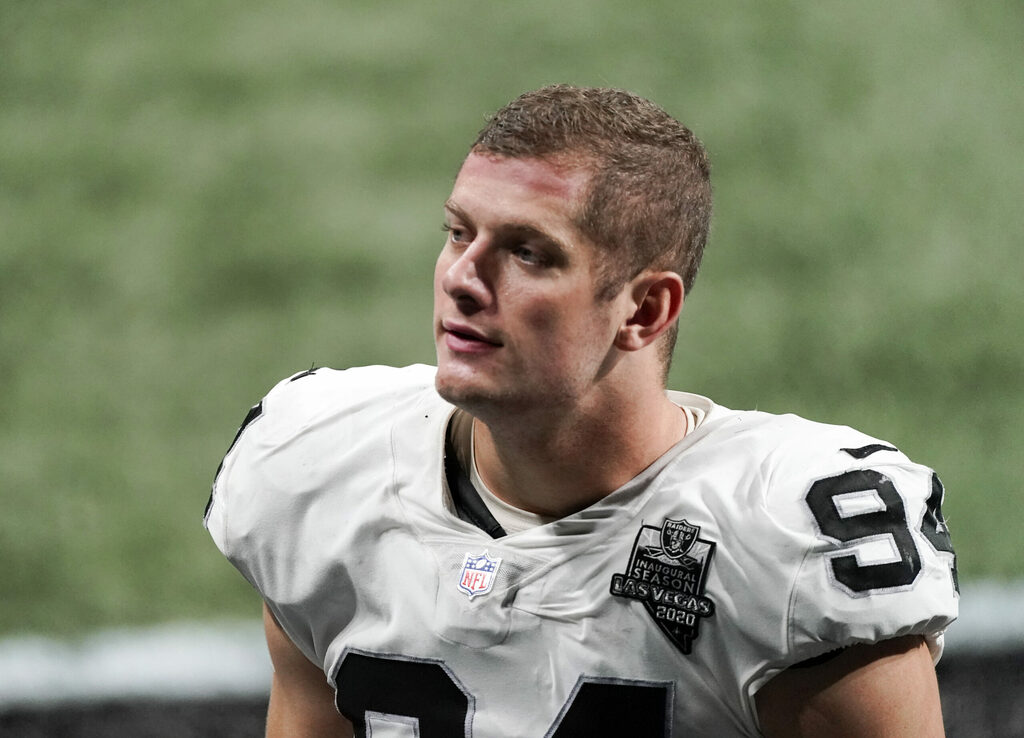 Earlier this year, Las Vegas Raiders defensive end Carl Nassib became the first active NFL player to come out as gay, and the most remarkable thing happened: Not much at all.

He received congratulations from around the league, from long-time advocates for gay rights and from people heartened by his decision.

But mostly, people just moved on and let him play.

Now, because Nassib just happened to be playing for a homophobic, racist coach who views his players not as people but as disposable pieces in a game that should remain outlandishly violent, he’ll face relentless questions about Jon Gruden.

Raiders DE Carl Nassib, the NFL’s first openly out player, has been quietly kicking ass this year. The notion of him having to deal with this story makes me furious.

Now that you know what Jon Gruden was saying in private, does it color your interactions with him?

Do you think other coaches and leaders in the league share these thoughts?

Worst of all, there almost certainly will be no reckoning for the league as a whole. Gruden has already resigned. People within the league have moved to condemn him. The NFL is good at this: Strenuously reacting in public to a problem that it probably could not deal with even if it wanted to.

The league has deployed some pretty slogans about ending racism, but only after Colin Kaepernick was simply blackballed forever for daring to point out basic inequality and systemic racism. When it came time for the case to go to court the league — the rich owners — paid the price to make it all go away.

And right now, those same owners are almost assuredly *not* taking a hard look at the people they’ve chosen to lead their organizations. They’re doing, instead, some version of this:

The line outside #NFL IT department. pic.twitter.com/x2aTtza4kc

And Gruden will be able to slink away because of this:

Thought on scene last night:
Mark Davis/NFL: "Jon, you're going to resign and we're not going to pay you anything left on your contract."
Gruden:"Ok. I've also got emails from other people that are as bad."
Davis/NFL: "How about $10 million and no one sees them?"
Gruden: "Deal."

Which leaves Carl Nassib and league’s majority population of Black players left trying to answer for a system that is weighted against them by the people who hold the actual power.

Same as it ever was.

Think about the path Nassib took to this point: He was a walk-on at Penn State in the wake of the Jerry Sandusky scandal who eventually earned playing time, became a starter his senior year, and finished his college career as a unanimous All-American who won the Lombardi (best lineman or linebacker) and Ted Hendricks (top defensive end) awards.

So, few people who knew Nassib were surprised when he had the courage and resilience to come out with a simple Instagram video.

It shocked me, though. When I was at Penn State, starting a decade before Nassib, it was not a place I would consider friendly to LGBTQ+ people. The women’s basketball coach, Rene Portland, had talked openly of having a no-lesbian policy on her team, and one of her fiercest advocates in the athletic department was the football coach, Joe Paterno.

Paterno had charmed local and national media, of course, by espousing a view of “student-athletes” that demanded they be involved in all of campus life and not just be sequestered together and focusing on football. But in the early 2000s, with Paterno mired in the worst stretch of his career (only one winning season between 2000 and 2004), the players I came to know well felt dissuaded from doing anything of the sort, fearing it might be seen as a “distraction”.

When Penn State’s Black Caucus called for football players to use their platform to bring attention to racism on campus, I defended the players’ decision to sit it out — but only because, in background conversations, it became clear they thought they would hurt their chances of earning playing time by getting involved.

I’m not close enough to the situation at Penn State to know whether much has changed in this regard, but I felt such pride when Nassib made his announcement. I thought about how impactful it must have been for so many people.

Then Monday, on National Coming Out Day, the New York Times revealed that Nassib’s current coach had, starting around the year 2011 — when Nassib was walking on at Penn State — sent discriminatory emails that included the following:

In the emails, Gruden called the league’s commissioner, Roger Goodell, a “f****t” and a “clueless anti football p***y” and said that Goodell should not have pressured Jeff Fisher, then the coach of the Rams, to draft “q***rs,” a reference to Michael Sam, a gay player chosen by the team in 2014.

And we were all left to wonder where we could go from here.

I was lucky enough to get to know Cyd Zeigler a few years after leaving Penn State. One of the lead writers for Outsports.com, he told me early on that he felt we — both the media and society in general — overstated the perceived danger that gay athletes would face if they chose to come out.

On Monday, prior to the Gruden news breaking, he tweeted this:

I keep seeing LGBTQ people in sports say how "lucky" they are to get acceptance from their team.

No doubt. Any time we get acceptance it's a blessing.

Yet acceptance is the RULE, not the exception, in sports. The vast majority of out athletes are accepted.

The data compiled in this story is enough to give anyone hope.

But then there’s the fact that Jon Gruden, just 58 years old and not even halfway through a 10-year, $100 million deal, would have just kept on coaching and wielding influence had it not been for his emails turning up in an unrelated investigation.

More than that, if he’d stopped coaching for any other reason — losses, simply tired of the grind — he would have immediately become the most coveted NFL television personality outside of Peyton Manning. Some network would have given him millions to spew his “analysis” on TV while he went back to spending his days emailing league power brokers his actual thoughts.

So then that’s the issue: How do we root out what we can’t (usually) see?

Prior to Monday, to all the world except those he’d shared his real beliefs with, Gruden might have looked like an ally.

Even if Gruden treated Nassib fairly and was kind to him, his words have done unimaginable harm, of course. Think of any young gay person facing a decision about coming out. They may know that among their peers it will be hardly a blip. But the people making the decisions, holding the power, are different. They might hide behind a facade of inclusion but who can know what emails they might cackle at during any given day?

Therein lies the danger. The people in power are powerful enough to project one set of beliefs that in fact gives them cover, in so many cases, to act on a wholly different set of beliefs. And because so few of them are ever found out, the system becomes entrenched.

I’m sure Carl Nassib knew as much when he decided to come out. But he’d faced long odds and overcome before. Now we must hope the focus shifts again to him and his story before too long. Because we’re not going to uncover every Jon Gruden (though we should try). And those people aren’t going to change of their own volition.

It shouldn’t be up to Carl Nassib to have to fight that tide. But he has, and will, relentlessly. Let’s follow.