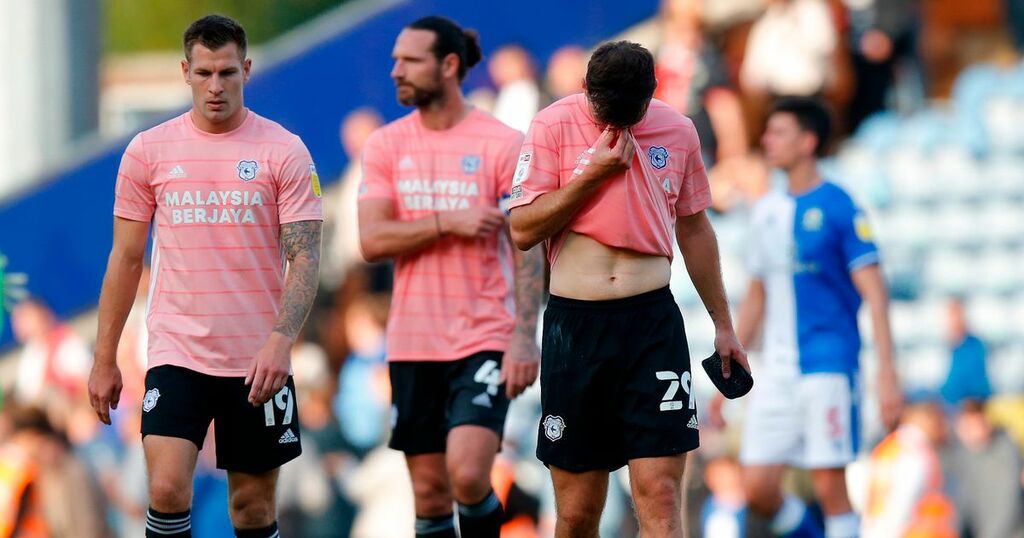 "He's doing what he's been brought in to do - score goals."

That was Mick McCarthy's understandably glowing verdict on James Collins during pre-season.

At the time, Cardiff City's latest striker signing simply could not stop putting the ball in the back of the net. He looked like someone who had slotted seamlessly into the Bluebirds' squad and was ready to make his mark when the season began.

His form during the summer was also cause for much excitement among City fans. They knew his promising goalscoring record at Luton Town beforehand and there was hope that he would be able to continue in a similar vein with the Bluebirds.

In fact, the prospect of Collins starting up front with Kieffer Moore was genuinely exciting.

"Those two will be a right handful together," McCarthy bullishly predicted after the Republic of Ireland international netted one of his four pre-season goals against Forest Green Rovers.

The manager had no reason to believe, from what he had seen both during his time in charge of him at international level and his few few weeks as a Cardiff player, that Collins would struggle so much in the early throes of the season.

He has scored more than 10 league goals in each of his last five seasons - two of which saw him surpass the 20-mark - and that is an area in which Cardiff desperately needed reinforcement.

Moore's stellar campaign last season saw him bag 20 goals himself, but City found themselves scratching around for consistent goals elsewhere.

Collins, it was hoped, would ease that burden on Moore.

READ MORE: The gold dust Cardiff City player who will disprove the doubters and dig Bluebirds out of slump

It is far too early to be writing him off, of course, he is an experienced campaigner and, as McCarthy said recently, one goal will surely spark a surge.

But no one envisaged that Collins would be 13 games into his Bluebirds career with his goalscoring account still unopened.

The Gary Madine comparisons are a little premature — he left the club having scored zero goals in 28 games but, crucially, cost £6million as opposed to Collins' free transfer — but with each passing, goalless game, those fearing such a goal drought become increasingly concerned.

The worry, it is fair to say, is that when Madine was at the club, there were far better attacking players to provide the chances. Cardiff's forward options have diminished greatly in recent seasons and genuine goalscoring chances are now coming at a premium.

That is not to say Collins has not had his opportunities, mind you. In fact, he has had 16 shots on goal, 12 of which have been inside the penalty area.

Only Tahith Chong (17), Darnell Furlong (21) and Callum O'Hare (27) have taken more shots than Collins without scoring in the Championship this season.

And while the service has not been excellent, there have been some pretty glaring misses along the way so far. That close-range header against Coventry City was perhaps the most glaring, while excellent opportunities against Blackpool, when he inexplicably scooped the ball over the bar from inside the six-yard box, and Nottingham Forest, where his effort from yards out was cleared off the line, also spring to mind.

It is not just him, of course. Moore has scored only once after Ryan Giles put it on a plate for him up at Blackpool, while Rubin Colwill is the only other recognised forward to have scored, if you discount Leandro Bacuna, which most people will, from that 'forwards' bracket.

Whether Cardiff's awful form has inhibited Collins from scoring or whether the striker being unable to find the net is one of the many causes behind the Bluebirds' slump is a chicken-and-the-egg scenario, but the player, the manager and the fans are desperate for him to break his duck.

Because at the minute, Cardiff have an out-of-sorts Kieffer Moore, a misfiring James Collins and untested options in Isaak Davies and Chanka Zimba, while Isaac Vassell is looking increasingly unlikely ever to feature for the club again and Mark Harris appears to have found home in the wide areas this term.

It paints a pretty sorry picture and one which will need addressing as a matter of urgency in January, if this current run persists.

It throws up a familiar problem, though, and one which McCarthy answered emphatically in the summer. Do you bolster your squad with recruitment externally or promotion from within?

Well, the trend we have seen this season is the latter, with Tom Davies, Oliver Denham, Tavio d'Almeida, Joel Bagan, Ciaron Brown, Tom Sang, Sam Bowen, Kieron Evans, Colwill and Harris all having played senior football at some point this term after graduating through the academy.

Are Zimba and Davies the next cabs off the rank? Zimba has been in almost unstoppable form in front of goal for the under-23s, while McCarthy is a big admirer of Davies and wanted to hand him his first-team debut against Rotherham on the final day of the season last year, however a cruel injury befell him he day before the game.

It is almost unthinkable that Collins would not be off the mark by January, and many will hope that first one opens the floodgates for him, but if goals continue to be in short supply and the current situation worsens, can the club really afford to simply throw their faith behind a bunch of rookies?

Moore will come good, one suspects, while Collins will hopefully endear himself to the Bluebirds faithful with a bucketload of goals in the next block of fixtures or perhaps, maybe, a South Wales derby winner. Something to kickstart his career in the Welsh capital.

But, if not, how long before pressure mounts on the club to bring in another striker to add competition – and importantly goals?

Indeed, how long before we see that "right handful" front pairing of Moore and Collins which McCarthy was so excited about in pre-season? Might that help stop the rot?

It is nowhere near panic stations just yet and for Collins, who typically flies off the mark at the start of the season if his previous campaigns are anything to go by, this is an alien situation.

However, he will be more determined than anyone to prove to McCarthy and the higher-ups that they do not have a decision to make when that January transfer window opens.