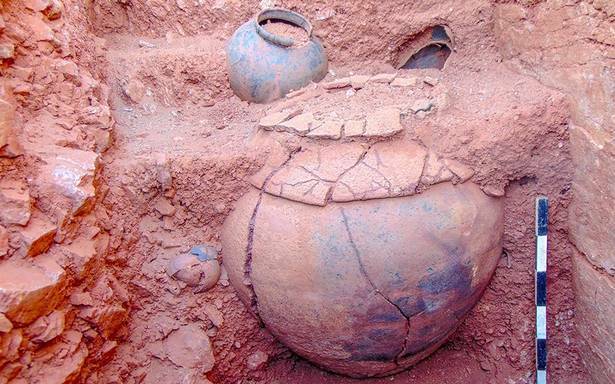 A carbon dating analysis of rice with soil, found in a burial urn at Sivakalai in Thoothukudi district of Tamil Nadu, by the Miami-based Beta Analytic Testing Laboratory has yielded the date of 1155 BC, indicating that the Thamirabarani civilisation dates back to 3,200 years.

Encouraged by this finding, Chief Minister M.K. Stalin on Thursday announced in the Assembly the establishment of Porunai Museum in Tirunelveli at a cost of ₹15 crore.

The story of Tamiraparani — the Copper Maiden

“The finding has established that the Porunai river [Thamirabarani] civilisation dates back to 3,200 years. It is the government’s task to scientifically prove that the history of the Indian subcontinent should begin from the Tamil landscape,” he said in a suo motu statement.

Mr. Stalin said archaeological excavations would be carried out in other States and countries in search of Tamil roots. In the first phase, studies would be undertaken at the ancient port of Muziris, now known as Pattanam, in Kerala.

“The research will be done jointly with Kerala archaeologists to establish the ancientness and culture of the Chera empire,” he said. Similar studies would be conducted at Vengi in Andhra Pradesh, Thalaikadu in Karnataka and Palur in Odisha.

The Chief Minister said the Tamil Nadu Archaeology Department would conduct research at Quseir al-Qadim and Pernica Anekke in Egypt, which were once part of the Roman empire, as well as in Khor Rori in Oman, to establish the Tamils’ trade relations with these countries.

“Potsherds bearing Tamil scripts have been found in these countries. The study will be conducted with the help of the archaeologists of these countries,” he said.

The ghosts of Adichanallur: Artefacts that suggest an ancient Tamil civilisation of great sophistication

Mr. Stalin said studies would also be conducted in Southeast Asian countries, such as Indonesia, Thailand, Malaysia and Vietnam, where King Rajendra Chola had established supremacy.

Recalling his visit to Keezhadi, where excavations had thrown up new findings, the Chief Minister said the carbon dating of the objects unearthed there had proved that the Tamil society had achieved literacy even in the sixth century BCE. “Keezhadi has united Tamils across the world.”

He said Calcutta University Professor Susmita Basu Majumdar had concluded that the silver coin with sun and other symbols was pre-Mauryan. Rakesh Tewari, former Director-General of Archaeological Survey of India, had said the outcome of the excavations at Keeladi, Kodumanal and other sites in Tamil Nadu have corroborated the view that there might have been contacts between south India and north India as early as 600 BCE-700 BCE or even earlier.