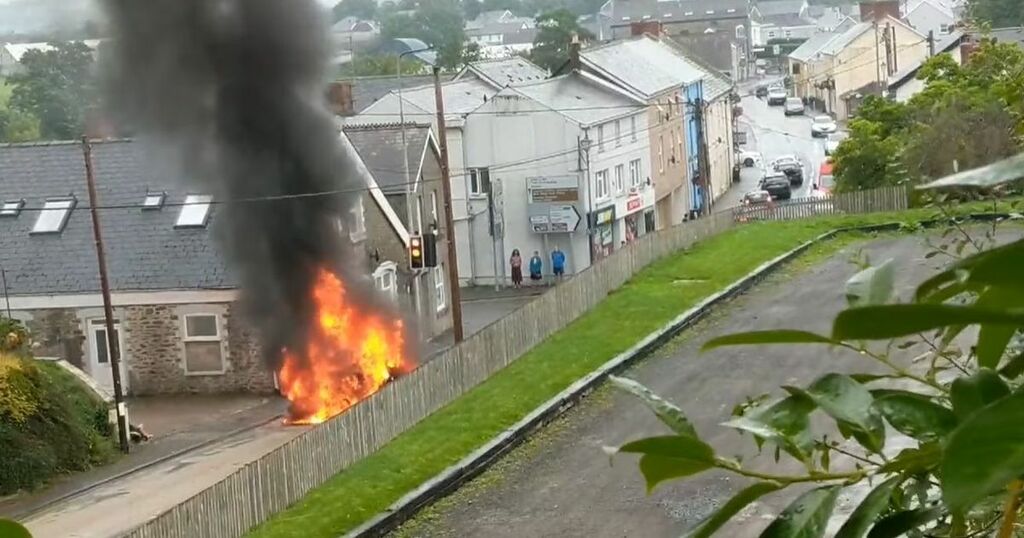 A car was totally destroyed by fire after it burst into flames in a Welsh town centre.

Firefighters were called to the Tenby Road area of St Clears in Carmarthenshire late on Monday afternoon.

The car - a grey BMW - was totally alight at the side of the road near the crossroads in the centre of the town, just yards away from high street shops such as Subway and Spar.

Video footage captured from the scene shows the scale of the fire, with the vehicle fully ablaze and with thick smoke billowing into the air.

Police arrived at the scene and advised people to avoid the area, as fire crews from Carmarthen and Whitland battled to extinguish the fire. The car itself was totally destroyed, and a nearby property also suffered heat damage in the incident.

A spokesman for Mid and West Wales Fire and Rescue Service said: "On Monday (September 13) at 4.51pm, crews from Whitland and Carmarthen attended a vehicle fire in Tenby Road, St Clears.

"One car was destroyed by the fire whilst a nearby property suffered heat damage. Firefighters extinguished the fire using two hose reel jets and a foam branch. An environmental pack was also used at the incident. The fire service left the incident at 6.54pm."

The cause of the fire is believed to be accidental, and nobody sustained any injuries as the occupants of the car had safely left the vehicle.