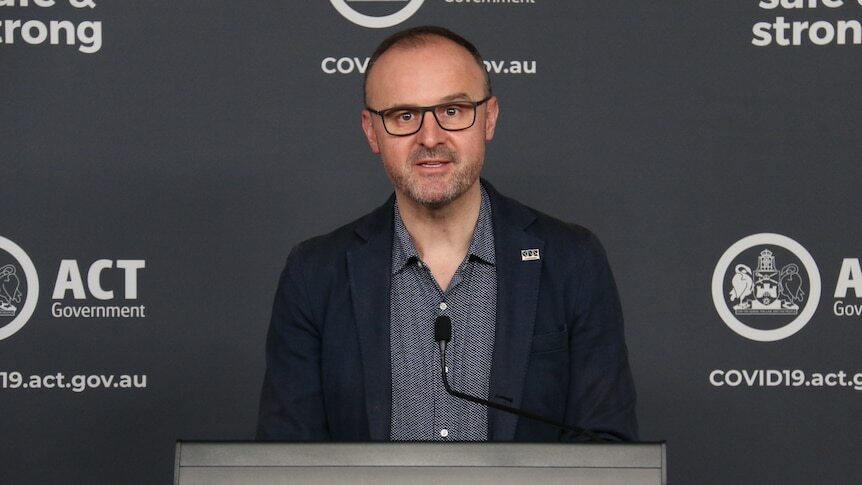 The ACT's lockdown has been extended for another four weeks until October 15, Chief Minister Andrew Barr has confirmed.

The extension of the lockdown comes as the territory recorded 22 new COVID-19 cases.

Of the new cases, at least 13 spent some time in the community while infectious, with only two in quarantine for their entire infectious periods.

There are 10 people in hospital, with two people in intensive care and one person requiring ventilation.

There are still 252 active cases of COVID-19 in the territory.

The ACT has been in lockdown since August 12.

The territory originally entered a seven-day lockdown, but an extension saw that end date pushed to this Friday, September 17.

Decision to extend lockdown due to new cases in ACT, surrounding NSW

Mr Barr said the decision to extend the lockdown was made as a result of the ongoing COVID-19 situation in the territory and surrounding New South Wales area.

"They are incredibly problematic for the ACT, given we are a jurisdiction sitting wholly within that state, and we are seeing incursion of the virus outside of the Greater Sydney area."

Mr Barr said the month ahead would be a "period of uncertainty", and conceded the next few weeks would be "challenging".

"The positive news for the ACT is that we have such a strong vaccination take up."

Mr Barr acknowledged that the news may not have been what Canberrans were hoping for, but he said it was a necessary decision to make to help prevent a COVID-19 crisis in the ACT.

"Those are the two options we have, and we've chosen a path that protects the health of the community whilst maximising the level of safe economic activity and social activity that we can conduct at this time."

Chief Health Officer Kerryn Coleman said that a lockdown extension was not what the ACT government wanted to do, but it was necessary due to ongoing COVID-19 spread.

Dr Coleman said some of the ACT's total cases were still unable to be linked to ongoing clusters in the ACT, which was of concern to health authorities.

"And concerningly, around half – about 28 of these cases – have been notified in the past two weeks."

Dr Coleman said there had been eight separate introductions of the Delta strain into the ACT since the outbreak began.

She confirmed that six of the incursions had come from NSW, with two coming from Victoria.

"Some of these are the result of individuals with exemptions coming in, doing the right thing and abiding by our necessary quarantine requirements," she said.

"But half have led to transmission within our community. With two of these only occurring in the last 48 hours."

Dr Coleman said that while the ACT would still like to reach "COVID zero" — no active cases in the territory — there would likely continue to be a "steady" number of cases moving forward.

"We'd all like zero, but I think increasingly with the examples in New South Wales and Victoria, that aiming for zero infectious in the community is a really good first start," she said.

"I would provide caution that this may be the start of what we may be working towards."

Mr Barr said further announcements would be made in the coming days for crisis response funding in areas such as mental health.

But he said from the start of term four — October 5 — year 12 students would be able to return to classrooms.

Year 11 students are expected to return to on-campus learning from Monday, October 18, provided the COVID-19 situation across the territory did not deteriorate, Mr Barr confirmed.

But Mr Barr said for the first few weeks of term four, ACT students from preschool to year 10 would continue remote learning, before a phased return to schooling across other age groups.

"Our goal is to get kids back to face-to-face learning as soon as it is COVID-safe to do so and we will continue planning for the phased return to on-campus learning," he said.

ACT Minister for Education Yvette Berry said the return to in-person schooling for year 12 students would enable students a full week of time to prepare for their AST exams, which take place on October 12 and 13.

But she acknowledged the challenges the lockdown was having on Canberra students.

"We have 81,874 students across our schools. I completely relate to the frustration, the emotional toll that it takes on young people," Ms Berry said.

Minor changes to some restrictions from Friday

From 11:59pm this Friday, there will be some slight changes to current restrictions, ACT Health has confirmed.