Can we use the Sun to find aliens? Scientists propose a relativity trick 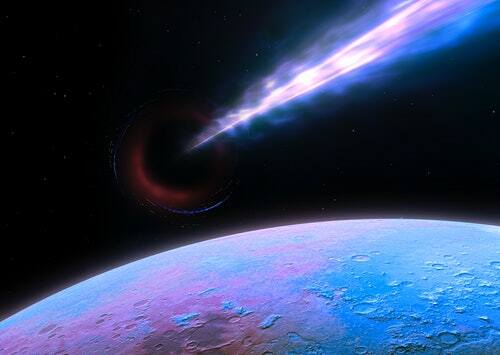 Stephen Kerby wanted to know if building a giant transmitter around the Sun would be worth the trouble.

The goal? Seeing if we could use it as an amplifier to send messages to aliens — or if we could detect the signals sent out by alien star transmitters.

“I decided to investigate the engineering challenges of using the gravity of a star to focus interstellar transmissions,” Kerby, a graduate student at Penn State’s astronomy department, tells Inverse. “Examining those challenges illuminates whether using a star for lensed transmission is practical or worth the trouble.”

What Kerby proposes is a stellar relay transmission system, which uses the gravitational lensing of a star to transfer communication through space at a faster rate. For his latest research, Kerby and his colleagues examined the practicality of building this system and whether scientists can also detect similar systems built by alien civilizations in the Milky Way.

The study is available on the preprint server arXiv.

The findings suggest that the Sun or nearby red dwarf star Barnard’s Star are viable hosts for a stellar relay. But other famous systems in the Milky Way, such as Alpha Centauri and Sirius, are not suitable because of their shape, spin rate, or stellar companion that causes them to wobble too much.

Here’s the background — Gravitational lensing is a cosmic effect that acts like a giant magnifying lens.

It occurs when a large object like a star or galaxy passes in front of an object in the background, distorting and amplifying the light coming from a distant source. For example, if scientists observe a distant galaxy from Earth, a cluster of galaxies situated along the same line of sight will magnify the amount of light coming from that distant galaxy, creating the same effect as a magnifying glass.

This effect was first predicted by Einstein’s Theory of Relativity.

Theoretically, a civilization could use the same effect to amplify transmissions. Satellite dishes used to transmit radio signals send out signals in the shape of a cone, spreading out as the light streams away from the transmitter.

But this signal would be too spread out — and therefore too dim — to detect on a cosmic level. So if aliens are sending out these signals, the chances of us detecting them from Earth are slim.

“However, Einstein’s Theory of Relativity allows light to be bent inwards by the gravitational force of a massive object like the Sun,” Kerby says. “In this way, a star’s gravitational field could act like the lens of a searchlight, focusing the radio transmission into a tightly focused beam that would spread out much more slowly and preserve brightness over interstellar distances.”

Using the gravitational lensing effect of a star like the Sun, these transmissions would be a lot brighter and easier to detect.

WHAT’S NEW — For the new study, Kerby examined what it would take to build a transmission system around a star.

“To build a stellar relay communication system, you need to place a transmitting spacecraft far away on the opposite side of the Sun from your target star,” he says.

For a star like the Sun, the probe needs to be at least 500 AU (equal to 500 times the distance from the Earth to the Sun).

The spacecraft then needs to maneuver to keep the Sun lined up with the distant interstellar target, because the Sun is constantly wobbling around due to the gravitational force by the planets.

Once the alignment is maintained, the spacecraft can aim its transmission dish at the Sun and use the gravitational lensing to create a focused beam of outgoing information to the faraway star, according to the researchers behind the study.

Through the research, they found that many stars would not be suitable for this kind of lensing because they are accompanied by a companion star or a giant planet orbiting tightly around their home star in a matter of days.

This causes the stars to “wobble” a little too much, making it difficult to maintain alignment.

“Additionally, many stars spin very quickly and are oblate in shape, which smears and distorts the lensing effect, making for poor focusing,” Kerby says.

Can we look for alien stellar relay systems? The research is part of a larger collaboration with SETI (Search for ExtraTerrestrial Intelligence), a series of interrelated programs looking for intelligent life beyond our solar system.

The findings could also help scientists trace these types of signals across the cosmos, especially if aliens are using our own star to send out transmissions.

Researchers would aim a telescope at the point opposite the target with respect to the Sun, and they may be able to detect a signal from the transmitting spacecraft, according to Kerby.

“At that point, you’ve detected a strange, unknown signal in nearby interstellar space, and you would start collaborating with other astronomers and scientific authorities to test hypotheses and rule out other explanations,” Kerby says.

WHAT’S NEXT — Further investigations are needed to verify whether an intelligent extraterrestrial civilization would build a stellar relay system.

Meanwhile, the researchers are also looking into what it would take to build a relay system around the Sun.

The research showed that the main engineering challenges to building a stellar relay system include getting a probe out to a distance of 500 AU or greater from the Sun (the most distant probe is barely over 100 AU from the Sun), having a reliable propulsion system to maintain alignment, and keeping autonomous operation at such great distance, according to Kerby.

“Only time will tell if humanity can work together to achieve these scientific challenges,” Kerby says.

Abstract: Several recent works have proposed "stellar relay" transmission systems in which a spacecraft at the focus of a star's gravitational lens achieves dramatic boosts in the gain of an outgoing or incoming interstellar transmission. We examine some of the engineering requirements of a stellar relay system, evaluate the long-term sustainability of a gravitational relay, and describe the perturbations and drifts that must be actively countered to maintain a relay-star-target alignment. The major perturbations on a relay-Sun-target alignment are the inwards gravity of the Sun and the reflex motion of the Sun imparted by the planets. These approx. m/s/yr accelerations can be countered with modern propulsion systems over century-long timescales. This examination is also relevant for telescope designs aiming to use the Sun as a focusing element. We additionally examine prospects for an artifact SETI search to observe stellar relays placed around the Sun by an extraterrestrial intelligence and suggest certain nearby stars that are relatively unperturbed by planetary systems as favorable nodes for a stellar relay communications system.