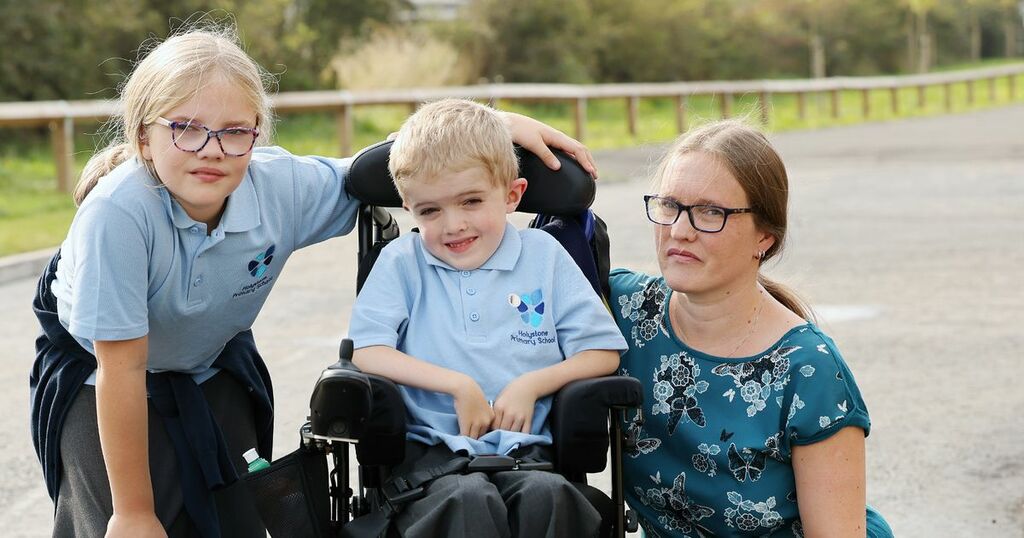 The family of a boy with a rare form of muscular dystrophy whose condition worsened during lockdown are fundraising for a device that could change his life.

Austen Brooks-Peddie was diagnosed with a rare condition called Ullrich Congenital Muscular Dystrophy (UCMD) in December 2019 - just a couple of months before the Covid-19 pandemic swept the country.

Until then, doctors did not have a specific diagnosis for the five-year-old, who was known as a SWAN - syndromes without a name.

Although the family, from Holystone, North Tyneside, were relieved to finally have a diagnosis, the next year saw Austen’s mobility deteriorate dramatically.

Mum Cherrill said: “His leg strength got a lot worse, partially due to lockdown - he wasn’t able to do stretches as much, he was sitting in a chair all day.”

He was given a power wheelchair to help him get around in February this year as he is now unable to stand or walk unaided.

Austen’s physiotherapist has told his family that since getting his wheelchair she is worried he is losing a lot of strength in his legs because he isn’t using them as much.

She has recommended an Innowalk - a motorised machine that simulates walking for severely disabled people.

Cherrill said: “It will really help Austen retain strength in his legs but is an enormously expensive piece of equipment and there isn't any NHS or Local Authority funding available.

“At a cost of £27,000, as a normal working family this is something that is unavailable to us and there is limited charitable support due to their own reduced funds after Covid.”

The family have now launched a campaign to raise the much needed funds.

It comes after a tough journey that saw Austen baffle doctors with his symptoms for more than three years.

Cherrill said: “From when he was born I knew something was going wrong.

“His hips weren’t quite right, he didn’t have much strength to lift his head, he wasn’t gaining the core muscle strength to sit.”

Austen was referred to Newcastle ’s Centre for Life, a service in Sheffield and involved with the 100,000 Genomes Project.

In December 2019, at the age of three and a half, Austen was diagnosed with UCMD. The condition means he can’t straighten his knees and hips fully, while the rest of his joints are “bendy”.

Austen shuffles around on his haunches as he can’t stand up himself and struggles with his balance.

He has recently borrowed an Innowalk and “loved it”, but his family would like him to have one of his own.

Cherrill said: “I think these things should be looked at as something you can get, as least partially funded, from local authorities

“It’s not just recreational, and having to crowdfund is not a situation people want to be in.”

The mum-of-two added: “Austen’s condition doesn’t affect his brain - his brain function is the same as any other child.

“Sometimes I worry that people just see his chair, but he is very much like a normal five year old.”

To donate go to https://www.treeofhope.org.uk/austen-brooks-peddie-austensuperpower/