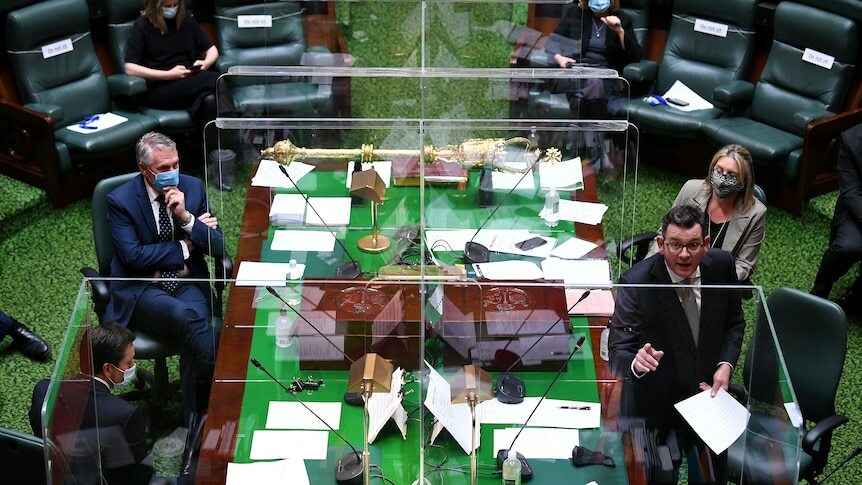 The Victorian government has had legal advice for more than a year that State Parliament can sit online, but hasn't acted on it.

State Parliament is sitting this week, but with decreased hours and MPs (and only one house at a time), due to the current outbreak.

The Victorian Greens and the Opposition have accused the Andrews government of attempting to avoid scrutiny by suspending parliamentary sitting weeks, instead of creating a plan to allow MPs to vote online.

The Upper House will today debate trialling a hybrid sitting model and if passed, it could mean MPs can participate from home.

The Speaker's report that proposes the model details legal advice sought by the Clerk in September 2020, which states both houses of parliament "may adopt orders" allowing MPs to participate in proceedings "remotely by means of audio-visual commission technology".

"In my view, such orders or rules may permit such Members to vote and to be counted in a quorum," the advice from Chris Horan QC states.

Victorian Greens Leader Samantha Ratnam, who put forward the motion that called on the Speaker to develop the hybrid proposal, questioned why the government didn't act on that advice a year ago.

"It is unfortunate it seems like a lot of this work had been done over 12 months ago, the Parliament was prepared to be able to think about these options, but the government hasn't advanced these discussions," she said.

"It is really crucial Parliament sits in times of crisis, we've seen workplaces across the world adapt quickly to the COVID situation and move online, and Parliament should be no different."

Victorian Legislative Council president Nazih Elasmar said the legal advice stating MPs could vote online could be challenged in court and was not worth the risk.

"[The Upper House] has continued to sit in a COVID safe manner and we've adopted a COVID-safe plan," he said.

"The constitution states members that vote in a quorum must be present and the word 'present' could be challenged in court."

The Lower House has trialled some online participation for Question Time, but not voting.

The Federal Parliament has a hybrid model where members can participate remotely by speaking to bills, providing members statements and participating in Question Time.

New South Wales Parliament has not held a sitting day since the state budget was delivered in June, but is due to return next month.

Executive director of the Centre For Public Integrity Han Aulby said parliaments across the world have managed to find ways to sit online.

"Parliaments are sitting in the UK, Europe and Spain, they are voting online, they are tabling bills online, there is nothing stopping Victoria from doing the same," they said.

"During crisis there is an increased amount of power and money in the hands of ministers and it in times like this it is even more important the government is properly scrutinised."

"It's quite clear that legally we could sit in a hybrid model, the Parliament has known that since last year — it's absolutely crystal clear," he said.

"Why has the government not done it? Well, I don't think they want the scrutiny."

Mr Davis said most MPs, staff and media were fully vaccinated and Parliament could act as a trial for an industry to continue properly through the pandemic.

Ms Ratnam, who was forced to come into Parliament to return in the middle of her maternity leave last year to vote on a bill, said it was important a way of online voting was found so Parliament could become a more flexible workplace.

"Essentially the rules at the moment say your vote doesn't count, you can't continue your job in the Parliament if you have to take maternity leave or if you get sick," she said.

"It meant I had to come back for a 12-hour day, with an eight-week-old baby in my Parliament office, which was really challenging … but there was no other way for my vote to count."