Calls for crackdown on 'shonky' builders in Tasmania, with homeowners speaking out about traumatic experiences

By By Annah Fromberg 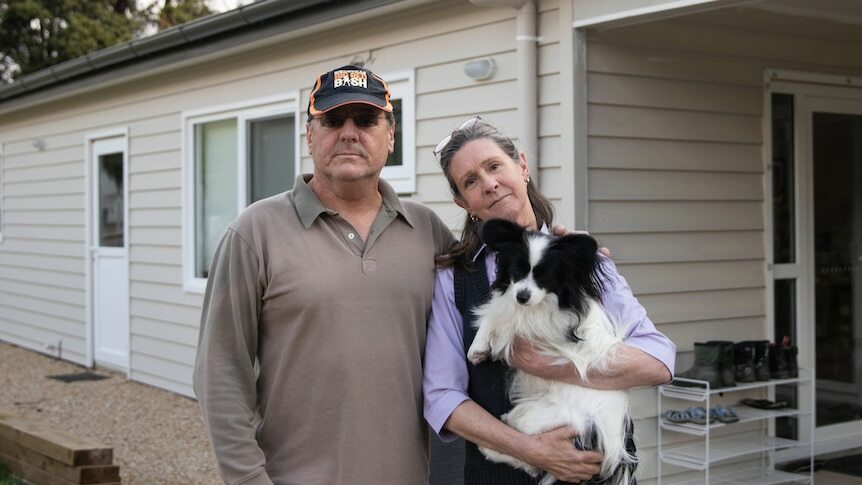 Adriane and Gillian Creamer began a $400,000 renovation and extension of their Cygnet home, south of Hobart, in November 2019.

The couple, who are approaching retirement, describe it as the most traumatic experience of their life.

Issues with their build surfaced four months in when Mr Creamer said he realised his cladding had been installed incorrectly.

Then other tradesmen — the tiler and kitchen joiner — started raising concerns with the couple about new walls being not completely vertical and the floor not being level.

"The kitchen there was 30 millimetres lower on one side of the room than it is on the other side of the room, there were issues with the deck, it wasn't fixed to the main building properly," Mr Creamer said.

When he questioned the builder about the issues, the couple said the relationship became so strained, they sought legal advice and an assessment from a second building surveyor.

"We had a building surveyor who was heartily recommended by our builder, but the problem with that was, he basically didn't see anything [wrong]," Mr Creamer said.

The second surveyor's report listed a number of problems.

"He [the builder] got about 30 things wrong with the build, 30 defects, 12 of which were so serious we couldn't live in the house or sell the house until they were satisfactorily repaired," Mr Creamer said.

The relevant regulator in Tasmania, the Consumer, Building and Occupation Services (CBOS), insists there are sufficient consumer protections to force builders to fix defects, without resorting to legal action.

In a statement, a spokesman said during construction, the building surveyor can issue direction notices to require rectification of defects.

"If a builder fails to comply, the permit authority of the relevant council has powers to enforce compliance," the spokesman said.

If defects are discovered after practical completion, CBOS said it had a range of dispute resolution processes, including adjudication.

"And an adjudication outcome made by a panel, has the effect of an order of the Magistrates Court," the spokesman said.

The Creamers, who were desperate to move into their home, were worried this process could drag on for many months, if not years, and did not trust their builder to properly repair the work.

Acting on the advice of their experienced property lawyer, they terminated their building contract and have paid other tradesmen to repair the defects.

Labor MP Jen Butler said she is regularly contacted about dodgy builders and Tasmanians were being left hundreds of thousands of dollars out of pocket.

She will table a motion in Parliament on Thursday for a select committee inquiry on consumer and building sector protections in the Tasmanian building and construction industry.

"Consumers are repeatedly facing issues with problem builders with very little recourse except taking really expensive legal action and a lot of the time the consumers have already invested just about everything that they've got into the build," Ms Butler said.

She said the proposed inquiry would examine the adequacy of current legislative and regulatory mechanisms available to CBOS to investigate and compel builders to fix defective work.

"Tasmania's building and construction industry is booming … from time to time there are shonky builders and we want to see how we best protect the quality reputation that Tasmanian builders have," Ms Butler said.

The Creamers are backing calls for a parliamentary inquiry but in the meantime have taken matters into their own hands.

They have erected signs on their front lawn to raise awareness about their experience and are urging people to know their rights.

"We're going to try to do what we can to change what needs to be changed in Tasmania to make it a level playing field."

The Minister for Consumer Affairs, Elise Archer, has already rejected the idea of a parliamentary inquiry, even before the terms of reference have been tabled in Parliament.

She said she understood the concerns raised by several individuals interviewed by the ABC last month and she met with them recently to discuss a way forward.

She said many of their issues related to legislation that had since been strengthened.

"While many of the issues raised relate to circumstances before our amendments, I have asked my department to look at any potential improvements that could be made to further strengthen the framework moving forward," Ms Archer said.

"Therefore, there is no need for a parliamentary inquiry," she said.

She said a new tribunal would commence in November called the Tasmanian Civil and Administrative Tribunal (TasCAT).

"I am already considering whether TasCAT could handle disputes around these issues into the future to make it simpler, faster and cheaper to resolve such disputes," Ms Archer said.

It has angered some consumers, like Launceston homeowner Ash Dunn, who said it appeared the meeting with Elise Archer and CBOS a few weeks ago had been a waste of time.

"We need an inquiry for the sake of transparency and to get to the bottom of things."