SAN DIEGO — California will take a national role in abortion access in the event that the landmark ruling Roe v. Wade is overturned, state and local leaders said at a roundtable discussion Thursday.

Bonta said the state is prepared to create a haven for patients traveling to California.

"If you seek an abortion in California, you will be protected," he said. "I, as attorney general, will protect that."

Assemblymember Akilah Weber, D-La Mesa, said she was devastated by news of the draft opinion for Supreme Court overturning Roe v. Wade and the federal protections it confers for women seeking an abortion.

"My heart sunk because once again, core rights bestowed upon Americans are now being ripped away," she said.

Weber, who is also an OB-GYN, said she has introduced a bill, Assembly Bill 2134, that "establishes a California reproductive health equity program" that would reimburse medical providers for abortions and other reproductive health services even if private companies' health plans do not.

She said her accomplishments in medicine and politics were possible because she was able to choose when she had children, and lamented the loss of that choice for other women if Roe is struck down.

Weber said the possible reversal of abortion rights struck a personal blow to her as a Black woman, noting that Black women have the worst maternal health outcomes, with poor health care access, lower pay and high rates of maternal mortality. Data from the U.S. Centers for Disease Control nd Prevention show that Black women die in childbirth at three times the rate of White women.

She said her experience in states including Louisiana and Texas, which have restricted access to abortion and other reproductive health services, offered a preview of the likely outcome of a reversal of Roe v. Wade.

"At UT Southwestern Parkland Hospital (in Texas), our residents could not be trained in basic abortion practices," she said. "Now expand that restriction to all of Texas, and to 25 or more states that will likely place a ban or restrictions on abortion services."

Vernita Gutierrez, vice president of external affairs for Planned Parenthood of the Pacific Southwest, said the Planned Parenthood Action Fund is working to "maintain and expand access to reproductive health and sexual education." It is preparing for the possibility that women from those states will travel to California for treatment.

"People with the means will always be able to access abortion," she said. "It's the folks who already struggle to access basic health care, to put food on the table, to afford child care, those are the folks who are going to most hurt. Black people, indigenous folks, people of color, immigrants, young people, LGBTQ folks, those will be the folks who suffer the most as the result of this decision."

The roundtable discussion echoed calls of local activists protesting the draft ruling. On Wednesday night, more than 500 protesters marched in support of abortion rights through parts of downtown.

"Abortion is a medical issue, a working-class issue, and our bodies cannot be used by the Supreme Court or by the government at large as bargaining tools," said Justine Mann from the Party for Socialism and Liberation's local branch.

"Banning abortion will not take away the need for abortion," she said.

The medical consequences of improperly performed abortions are grim, Weber said. Illegal abortions may leave behind parts of the fetus or placenta, result in infections and hemorrhage, and create the need for emergency hysterectomies, she said.

"Many people have died in the past and we don't want to revert back to those days," she said.

Carrying a child to term can also pose serious risks, said Suzanne Afflalo, medical director of Alliance Health Clinic. Women who have had prior pregnancy complications may be advised not to become pregnant again, and may face life-threatening consequences if they do, she said.

"Even a healthy woman can still lose her fight with a healthy pregnancy," with the sudden onset of complications such as pre-eclampsia, high blood pressure or seizures, she said.

Without the option for abortion in medical emergencies, efforts to save a fetus at the expense of the mother can cause the death of both, she said.

"If that is at stake, we're playing Russian roulette with her life," Afflalo said.

Weber disavowed the notion that women undertake elective abortions lightly, noting that the decision to end a pregnancy "is not a one-sized fits-all" choice, and may be prompted by financial insecurity, educational needs, or physical or sexual assault.

"Women choose to terminate a pregnancy for many reasons, and it is never an easy decision," she said. 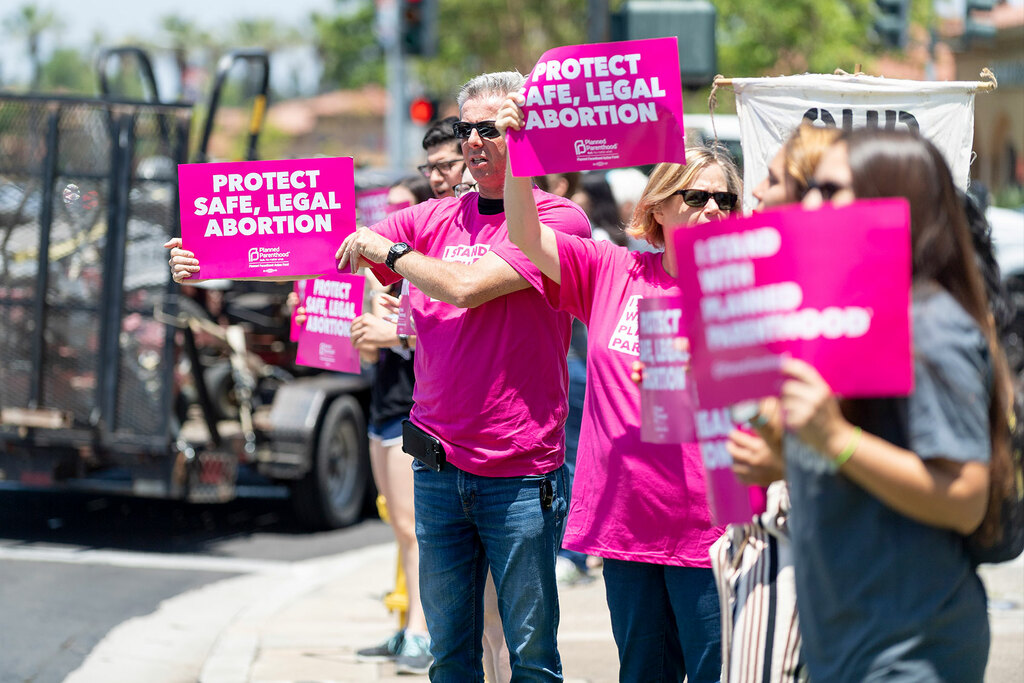 Calif. abortion providers prepare
But is the state prepared for a surge out-of-state patients?

Tribune News Service
What is Roe v Wade and did it get overturned?