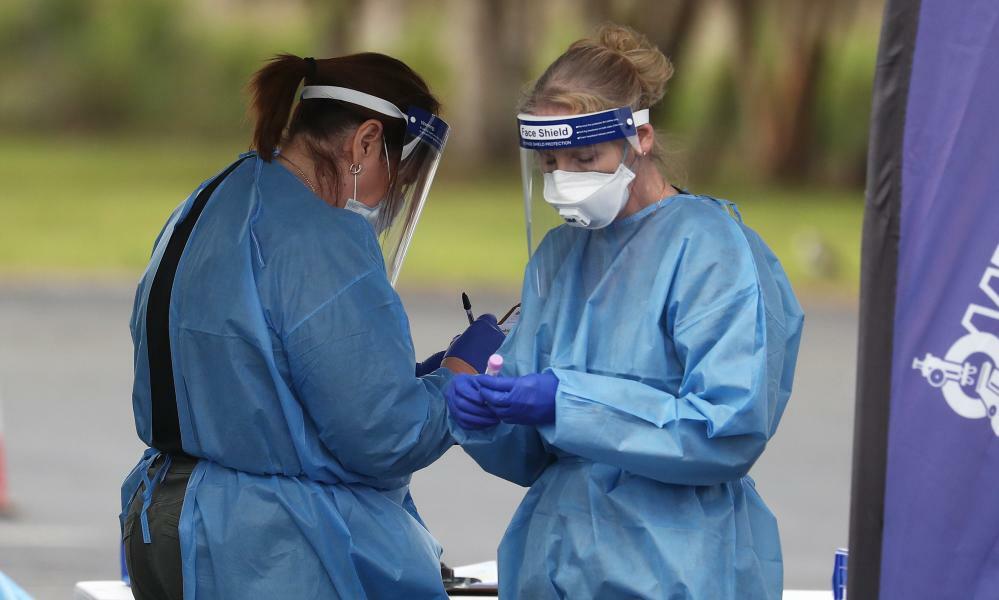 Staff at the hospital serving tourist mecca Byron Bay in northern New South Wales say the facility is under “extreme strain”, with Covid-positive patients left in bays behind curtains and one patient waiting 45 hours to be transported to the region’s designated Covid hospital.

As many as 100 people a day are arriving at the Byron Central hospital, stretching staff already depleted by Covid-forced absences. The Byron area had a double-vaccination rate of about 85% as of 20 December, one of the lowest in NSW.

The hospital’s single isolation room was taken up by one Covid patient for almost two days earlier this week before being transported. “We are constantly being crippled by a lack of transfer options” with ambulances often unavailable because of their own shortages, a senior staffer who requested anonymity said.

“We have a positive pressure room also that is being used as an isolation room and another room which we can close an actual door on,” the hospital worker said. “These are often all taken up, so we have Covid-positive patients in bays behind curtains because we can’t get people to where they need to be in a timely manner.”

As reported this week by Guardian Australia, northern NSW hospitals are under increasing strain at the designated Covid hospital at Lismore and at the bigger Tweed hospital near the border with Queensland.

Byron’s challenges are made worse by the loss of medical staff who have refused the government’s Covid vaccination mandate, and its proximity to communities with relatively large anti-vaccination support.

The region also has a relatively high number of cases per 1,000 people, with another 1,154 Covid cases in northern NSW in the latest 24-hour reporting period.

“Three of the people that have required oxygen with Covid this week have all been unvaccinated,” the senior staffer said. “We’re all tired and under pressure and facing abuse.”

The NSW health department says its workforce across northern NSW had been “increased and upskilled, with more than 265 staff attending surge training in intensive care, emergency care and immunisation specialties to provide additional capacity if needed.”

Liz McCall, assistant secretary of the NSW Nurses and Midwives Association and a senior nurse at Byron Central hospital, that while hospital services in Byron had long operated with “skeleton staff”, conditions have got increasingly worse.

While vaccination rates were improving, “we still have a lot of anti-vaxxers out in the community”. They typically require more medical care when they get ill and were more likely to pass the virus on to others.

Governments’ refusal to set minimum nurse and midwife to patient ratios as they exist in Victoria and Queensland has left NSW more exposed to Covid pressures.

“It’s just horrendous what they’re going through into the fever clinic because the queues are so long,” McCall said. “Because you’re in [personal protective equipment] all day, you get dehydrated, you can’t stop for a drink of water because you can’t take it off.”

“If you’re going to remove your mask, you know, take everything off and then start again and you just don’t have time for it,” she said. “They are really working themselves ragged in every department.”

“Because they’ve always kept us with such threadbare staffing for our hospitals, now they’re paying the price and every step of the way that’s been on the back foot,” McCall said.

A nurse at the Coffs Harbour Base hospital said staff were doing as much as 40 hours overtime in just one week, with managers pleading for staff to work longer hours.

“Staff are burning out and the standards of care are dropping,” the nurse said.

Do you know more about pressure in the healthcare system? Contact peter.hannam@theguardian.com. You can remain anonymous.