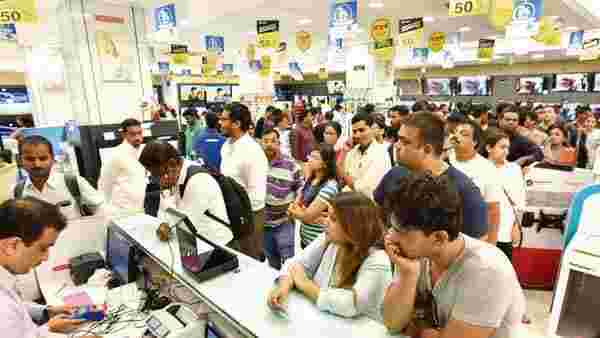 Indian consumers are ratcheting up buy-now-pay-later installment plans to purchase everything from washing machines to vacations online as the country’s longest festive season gets underway.

Popularity is swelling for these small-sized loans that typically amount to less than 5,000 rupees ($67) as the labor market recovers from the pandemic shock. Those payments have been growing at least 20%-30% over the past three months, according to fintech-firm executives. They are expected to increase by about 66% on an annual basis in India to $11.6 billion this year, a survey by Research and Markets showed.

“Things are very positive, people have got their jobs back," said Bhavin Patel, co-founder and chief executive officer of LenDenClub, a peer-to-peer lending platform. “The buy-now, pay-later model is the most popular source of borrowing for customers who need small size loans quickly to tide over immediate cash needs."

Rising vaccination rates coupled with decreasing coronavirus cases are fueling optimism that people are more willing to spend on goods and jewelery this year. Those consumers are increasingly turning to installment plans from retailers such as e-commerce giants Amazon.com Inc., Flipkart Internet Pvt. and Ant Group Co. backed Paytm, as well as smaller fintech firms like LenDenClub, Simpl, ZestMoney and CASHe.

LenDen has seen loan applications treble to 170,000 in September from February and expects a further increase to 250,000 in December, Patel said.

More broadly, spending per credit card was up 54% in August from the year before, according to a Bank of America Corp. report.

“BNPL is aided by two things, one is the festive season and second is Covid as people are becoming more comfortable with purchasing online," said Yogi Sadana, chief executive officer of fintech lender CASHe. “We are growing about 30% to 35% on a monthly basis, in terms of the number of loans we provide every month. The pick-up is phenomenal."

For fintechs, such loans are filling a sweet spot. They cater to customers who typically wouldn’t either qualify to borrow from a traditional bank or would have to wait longer than getting a loan within a few hours.

“It’s a win-win for all three players -- the borrowers who get loans quickly, the lenders who earn 10-12% average returns and us who earn a 5-6% fee by getting the borrowers and lenders on a common platform," Patel said.