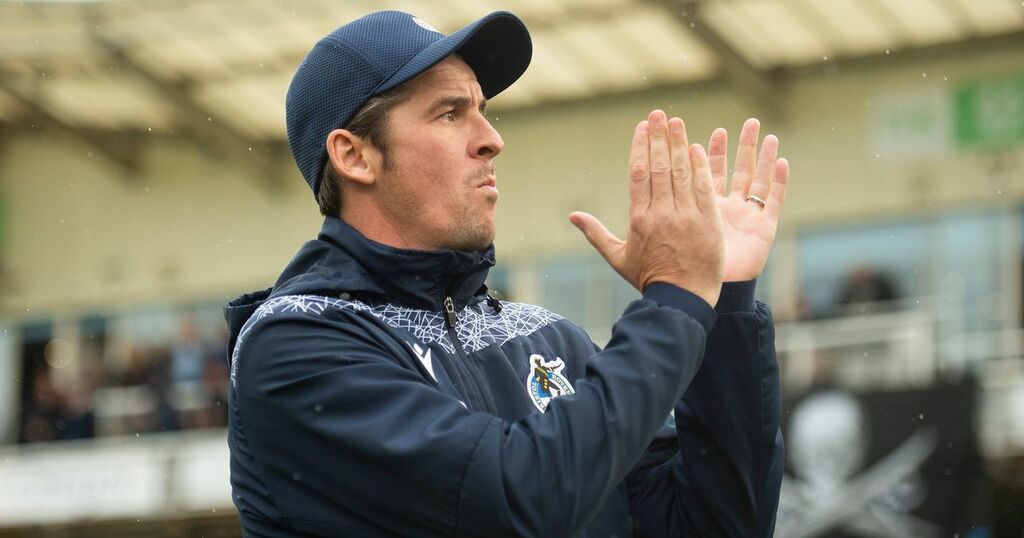 The subdued Joey Barton of the past few weeks is no more; the Bristol Rovers manager reverted to type at his pre-match press conference on Friday.

The 39-year-old has been visibly humbled by his chastening experience at the Gas in recent weeks, with his enthusiasm and optimism dented by a poor start to the League Two season.

But the energetic, free-speaking Barton of his early days at Rovers was back at The Quarters this morning, preaching positivity and burning a white sage incense in hope of banishing negative energy at the training ground with his side 20th in League Two after six defeats in 10 games.

Barton admits he had been affected personally by Rovers’ poor form, but he cut a more confident figure than the man who had offered to end his tenure six days previously after losing to Swindon Town.

Whether this surge in positivity is long-lasting, just a front or delivers results remains to be seen, but there was a livelier feel to Rovers’ training base – with players roaring in unison during a team meeting while reporters awaited Barton in a nearby room.

Barton has never been shy in speaking at length or exploring tangents, but his press duties stretched to new levels this week, launching into a winding and wide-ranging near 11-minute monologue in response to just the opening question from BBC Radio Bristol’s Ed Hadwin – who asked whether recent results and scrutiny had effected a change in the manager’s philosophy.

“You can be drawn into feeling sorry for yourself and I’ve just snapped out of it.

“I went to church on Wednesday and I had a good hour alone with my thoughts and I realised I’ve been sent here to help this football club out of the doldrums.

“The first 10-game block for me with my players and my coaching group, we’ve won three, drawn one and lost six, and that’s good enough, we’ve got to be much better than that.

“The next 10-game block, I’m very confident we will be. That’s not going to be 10 wins out of 10, hopefully it will be, but common sense tells you it’s going to be a lot more hard-fought than that.”

Barton’s speech took a journey through the Himalayas, an analogy he used to describe the peaks of footballing achievement; Mount Everest is a World Cup, K2 is the Champions League and so on.

He pointed out his worst finish as a player in the EFL pyramid was fourth in the Championship with Queens Park Rangers in 2013/14, when they won promotion via the play-offs. He contrasted that with Rovers historical best finish in the club’s 138-year history, sixth in Division Two in 1955. While that may be factually correct, it is not the kind of comment which will ease tensions with frustrated Gasheads.

“My worst ever finish as a player was fifth position in Division Two, so on a bad day the mountains I have scaled as a player are higher than any mountain that has ever been scaled by Bristol Rovers as an organisation,” he said.

“For me, Everest is winning a World Cup. K2 is winning the Champions League, getting up those big, big peaks. I haven’t got to the top of those mountains, but I’ve been up some high mountains with lovely altitude that are really difficult and when you get up there the air is thin.

“Not as much since I’ve been here, but I regularly go out and climb Snowdon or Ben Lomond. To get to the top of that mountain isn’t easy, it doesn’t matter how fit you are or how much training you’ve done.

“When I was a player, I wanted to climb Everest. Since I’ve had kids, I don’t want to die on Everest and leave my kids without a dad. But when my kids grow up, if I’m still fit enough, I might have a go and try to get up there.

“In footballing terms, this is my Everest now. This is the highest mountain for me because my professional career is on the line.”

Barton then made a staunch defence of Wael Al-Qadi, the club’s owner who has faced criticism from sections of the fanbase this week after reiterating his backing of the manager.

“The way he looks after players, the way he treats his football club, the money he has put in, I think it’s an objective marker point to see how much he cares about it. I’ve come here to help him.

“As a by-product of that, I knew there was a fanbase here that was in the doldrums for a long period of time and doesn’t know what good looks and feels like, it doesn’t know what success is, it hasn’t had enough of it in its 138-year history.

“With Wael Al-Qadi, we’ve got an owner in place who has got the resources to bring those glory days back to Rovers, the same way Steve Lansdown has done with his couple of billion-pound fortune to Bristol City.

“Wael has got the resources and the appetite to do that, but if he’s getting abused online he could quickly as an owner become very disgruntled. Rovers fans have to be careful what they wish for, he’s a superb guy.”

After a period of reflection, Barton says the criticism he has received has only strengthened his resolve.

“I want my players to believe and I want the people of this football club to believe that they are entitled to be successful.

“You have an entitlement, if you work hard enough, to expect to win on a matchday.

“This football club, if it gets its act together, has got a fanbase capable of being a big club.

“We’re a long way away from that, but we’ve got an owner who has got the resources to be able to deliver that.

“Nothing, they’ve got absolutely nothing to lose. It can only get better, but if you chase every manager out of the building. If I leave, you’re on your fourth manager in less than a year and that is never, ever productive in high performance.

“And if you chase this owner out of the building, who is going to take over and put £18-23million of his own money in and take nothing out? There are not many people like that in world football.”

Barton has urged for his rediscovered positivity to be mirrored around the Mem on Saturday.

He said: “In the next 10 games, we’ve got some tough games, starting in our stadium, which hasn’t been a great place for us recently, to turn this corner.

“I’m confident that if we all turn up with positivity, all I’m asking for is one 90 minutes for everyone to stay as positive as they can, and if after 70 minutes you get drawn down and you end up flipping over and becoming negative, so be it, but when that negative moment comes on all of us, let’s try to be as positive as we can.

“And if you hear someone being negative, in and around the stadium, check them on it and say ‘stick with the team and stay positive’, because that’s the way we’re going to get out of it.

“I’m just hoping that people come and people who listen to this and hear this come like the players and staff are coming this week, with a renewed positivity and energy.

“We’re going to turn this club around, all of us. That’s the fans, the players and the staff.”