Pahalgam (India) (AFP) - Indian flags fluttering over a sea of khaki army tents will form the backdrop to a mass pilgrimage starting this week in Kashmir that Delhi's Hindu nationalist government hopes will reinforce its claims to the blood-soaked territory.

The region split between India and Pakistan has been the cause of several wars, and three years ago Prime Minister Narendra Modi imposed direct rule over the Indian-administered part where an insurgency has raged for decades.

His government is hoping a million Hindu pilgrims from all over India will take part in this year's Amarnath pilgrimage, a trek to an ice stalagmite representing the Hindu destroyer god Shiva.

Once a modest, sparsely attended annual event, the pilgrimage -- and the accompanying security mobilisation -- has swelled in size as its political significance grew.

Put on hold for two years by the pandemic, the pilgrimage sees devotees hike for several days to the cave at 3,900 metres (12,800 feet),  sleeping on the route in tents and using bio-toilets lining the fast-flowing glacial streams.

Dozens of makeshift kitchens give out free food.

The old and infirm can take a shorter route or be taken by donkey, mule or palanquin carried by local Muslims.The wealthy can go by helicopter.

Businessman Vinod Kumar, 40, who travelled from the northern Indian state of Punjab said he has come every year for two decades.

"I don't enjoy (pilgrimages) anywhere else more than I do in Kashmir," Kumar told AFP.

The weather can be treacherous -- sudden snowstorms killed 243 people in 1996 -- but it's not the conditions that worry the Indian security forces.

Rebel groups opposed to India's rule of Kashmir have often said that the pilgrimage was not among their targets.

But they have warned in the past that they would act if the religious practice was used for establishing the Hindu domination of Muslim-majority Kashmir.

This year, tens of thousands of security personnel have been deployed, reportedly three or four times the number at the last pilgrimage in 2019, when 600,000 devotees took part.

A police officer told AFP on condition of anonymity that over 400 sandbagged bunkers manned by armed soldiers dot villages and forests around the shrine and the route to the base camp at Chandanwari.

Over the 43 days of the pilgrimage, the devotees -- many shouting religious and Hindu nationalist slogans -- will be transported through Kashmir in armed convoys.

Arriving in the nearby main town of Pahalgam, they are welcomed by a  billboard with Modi's smiling face.

The base camp is a mini township of prefabricated huts and flimsy tents housing security personnel, communications towers and a bustling temporary bazaar full of braying mules.

Before an armed insurgency against Indian rule of Kashmir erupted in 1989, the pilgrimage was a relatively low-key affair lasting 15 days and undertaken by a few thousand pilgrims.

Now it is highly militarised and has grown exponentially in scale and almost all government departments are involved in the huge logistical operation.

"In the past 25 to 30 years, the annual trek to Amarnath shrine has mushroomed from being an inner journey by pilgrims to being a political shout of majoritarian defiance," said Siddiq Wahid, historian and political commentator.

"In this context, neither the Kashmiri hosts nor the pilgrims can be faulted for being fearful of violence, through no fault of either," he told AFP. 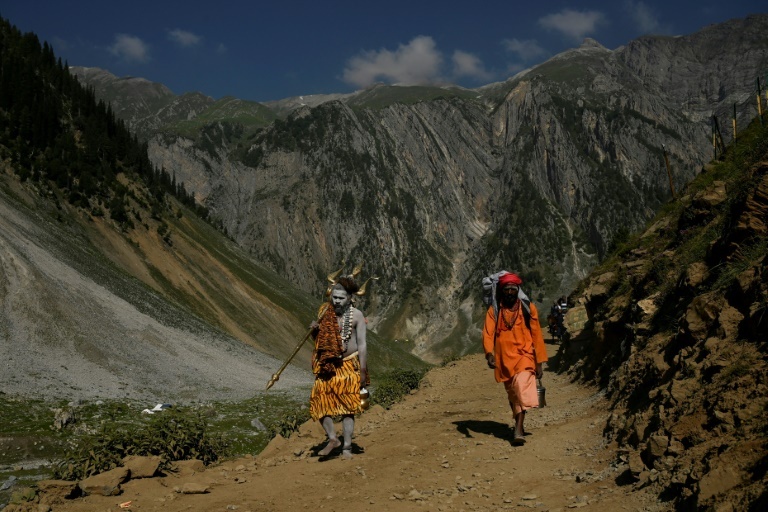 Government estimates a record one million Hindus from across India will join the 43-day pilgrimage in restive region.