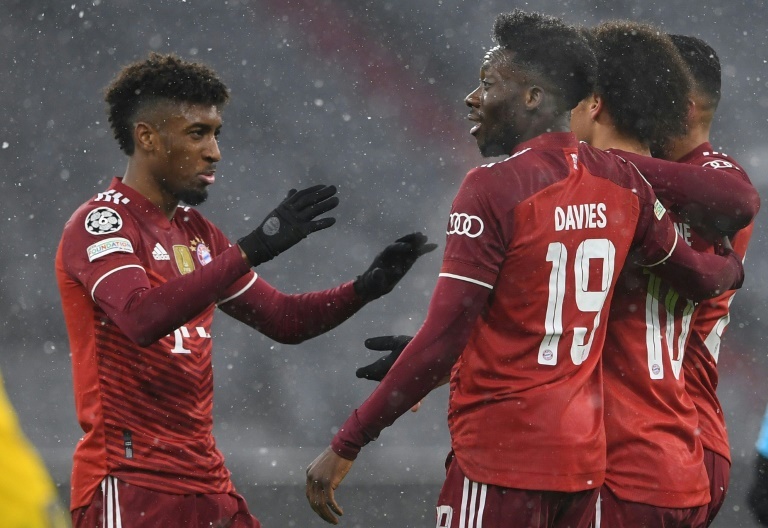 Berlin (AFP) - The Bundesliga resumes Friday after the winter break with the clubs trailing Covid-hit league leaders Bayern Munich looking to narrow the huge points gap in the table.

Bayern hold a nine-point lead ahead of Friday's home match against Borussia Moenchengladbach, but the coronavirus has decimated the Munich squad.

Defender Lucas Hernandez and club captain Manuel Neuer are also both in quarantine on the Maldives having tested positive on separate luxury holidays.

Bayern sports director Hasan Salihamidzic said that in addition to injuries, at one stage this week the club was down to ten outfield players and two goalkeepers.

However, Bayern have boosted their squad with players from their reserve team and Under-19 side.

"My job is to prepare the team as if the match will take place - that's what I am assuming," Bayern head coach Julian Nagelsmann said Thursday.

"We still have a starting eleven with a lot of world-class players and is very, very good."

The match is set to take place behind closed doors.

Nagelsmann has recalled midfielders Arijon Ibrahimovic and Paul Wanner, both 16, who were with the Germany Under-17 squad in Spain.

Either, if they come on, could become the youngest Bundesliga player in Bayern's history.

Bayern's closest rivals in the league - Dortmund, Freiburg and Leverkusen - will see their chance to make up ground.

Second-placed Dortmund are away to resurgent Eintracht Frankfurt on Saturday looking to bounce back from a shock 3-2 defeat at Hertha Berlin before Christmas.

Frankfurt will be a tough test for Dortmund having won their last three league games in December including a 5-2 hammering of third-placed Leverkusen.

Dortmund thrashed Frankfurt 5-2 when the clubs met last August as Erling Haaland scored twice and created the other three goals.

Freiburg can consolidate third place on Saturday when they host second-from-bottom Bielefeld, who could give a debut to new signing former Germany midfielder Gonzalo Castro.

Leverkusen have a tough home match against Union Berlin, whose striker Sheraldo Becker is sidelined after testing positive for Covid.

Leverkusen hope to include defender Piero Hincapie, who had been quarantined at home in Ecuador after testing positive.

One to watch: Ricardo Pepi

Augsburg this week reportedly paid a club record transfer fee of 17.5 million euros ($19.8 million) to FC Dallas for the 18-year-old American striker, who was being tracked by Bayern Munich and Real Madrid.

Pepi could make his Bundesliga debut at Hoffenheim on Saturday where he would face US team-mate Chris Richards.

"It was a dream to move to Europe," said Pepi, who describes the Bundesliga as "the perfect environment to gain experience at the highest level".

He has scored three goals in seven internationals for the USA national team and was voted the best young player in the MLS last season.

Five - the goals Moenchengladbach put past Bayern without reply in a shock German Cup result last October.Yet Adi Huetter's side have laboured in the league and are two points from the bottom three.

Five - of their last ten games against Bayern have been won by Moenchengldbach in all competitions with four wins for Munich and one draw.

Nine - the goals Bayern striker Robert Lewandowski has scored in 20 games against Gladbach, one of his lowest quotas against Bundesliga opposition.

Fixtures (all times 1430GMT unless stated)