Bull owner gored to death at jallikattu near Tiruchi 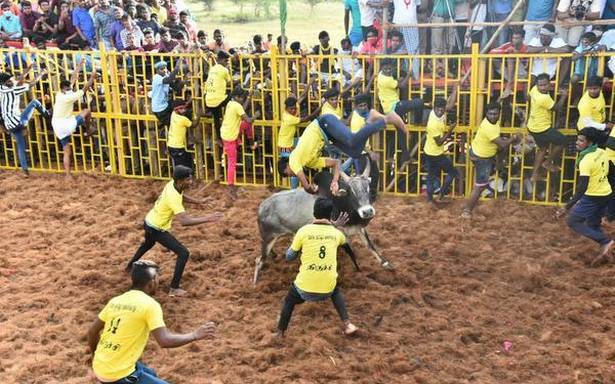 A 27-year-old bull owner was gored to death at the jallikattu held at Periya Suriyur in Tiruchi district on Saturday morning.

According to the organisers, the man, identified as Meenakshisundaram from Srirangam, was guiding his bull to the entrance of the vaadivasal to be released, when the animal went out of control and gored him to death. The man was rushed to the Tiruchi Mahatma Gandhi Memorial Government Hospital (GH), but was declared brought dead

Speaking to The Hindu, K. Vanitha, Dean, Tiruchi GH, said the victim had been gored in the thigh. and had bled excessively. He was brought dead to the hospital, she said.

So far, nine people have been injured at the Periya Suriyur Jallikattu, many of whom are bull tamers.

The event began at 8 a.m. on Saturday at Suriyur, outside of Tiruchi city. It was inaugurated by School Education Minister Anbil Mahesh Poyyamozhi. District Collector S. Sivarasu administered a an oath of fair play to the participants.

According to the organisers, 400 bulls and 300 bull tamers were expected to participate. Bull tamers and owners were asked to produce a COVID-19 negative certificate and a proof of vaccination of both doses.

A 35-member medical team along with ambulances were deployed, while 300 police personnel were involved to ensure law and order was maintained.