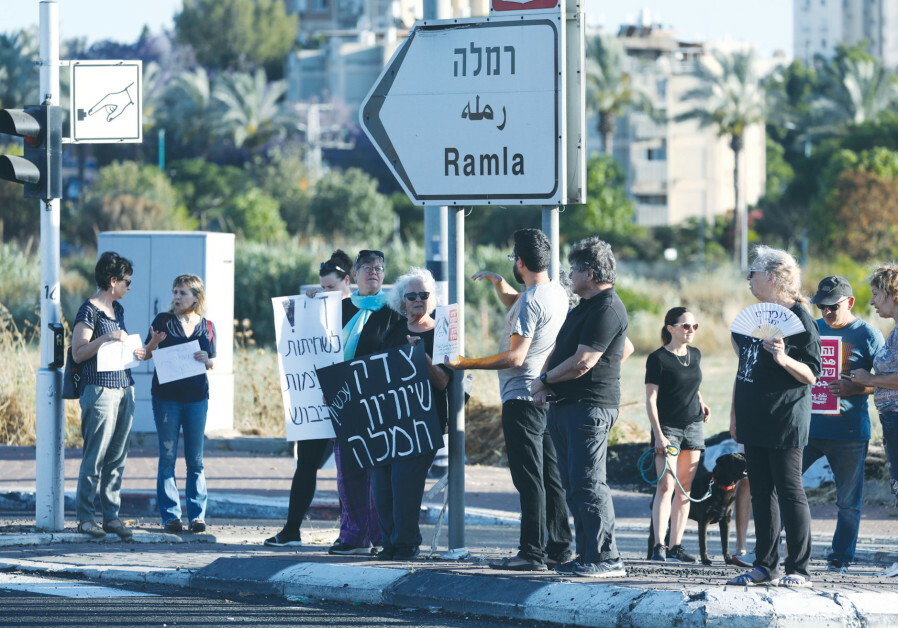 In Israel it is legal and even government-supported, to build whole buildings of apartments for religious Jewish people only. Those buildings can be for so-called “national religious people” or haredim (ultra-Orthodox). If you don’t fit into one of those identity groups, you cannot buy or rent an apartment in one of those buildings.

There are whole neighborhoods in Israel designated for these specific identity groups. The city of Lod has such a neighborhood as do many other cities in Israel. In fact, there are whole towns in which these rules are followed, such as Betar Illit and Modi’in Illit – both of which are beyond the green-line in occupied territory officially under the jurisdiction of the Israeli army. Elad is another example of a city designated for religious Jews and is located in the center of Israel. Israel also has laws to “protect” the identity of small communities. The (in)famous “acceptance committees” law enables small communities to conduct an interview procedure before allowing new residents to join the community. This law applies mostly in small community-villages, kibbutzim and moshavim. These laws claim to recognize the special nature or identity of a community and are in place to preserve the homogeneity of the community.

I was born in the mid-1950s in the United States. I remember that in the early 1960s there were still country clubs on Long Island in New York State that had policies which were similar. They were mainly intended to keep Jews and people of color out of their private clubs. Those laws, which enabled legal segregation, were eliminated in the US in the second half of the 1960s.

Laws of segregation were also eliminated in South Africa at the end of apartheid. On May 9, 1994, the newly elected and racially mixed South African parliament elected Nelson Mandela as the first president of the nation’s post-apartheid era and legal segregation officially came to an end. When segregation was legal in the US and even in South Africa, the excuse for it was to protect the rights of a particular community, to preserve identity, to provide security and safety. In the US there was an argument for “separate but equal” which was brought before the Supreme Court. The “separate but equal” doctrine was confirmed in the Plessy vs Ferguson decision of 1896, which allowed state-sponsored segregation. But with time and maturity “separate but equal” facilities were found to be unconstitutional in a series of Supreme Court decisions under Chief Justice Earl Warren, starting with Brown vs Board of Education of 1954. The cases brought before the US Supreme Court proved that separate was essentially unequal. Eventually, in the US, segregation laws and practices ended with federal legislation, especially the Civil Rights Act of 1964.

IN ISRAEL, we know that there is no equality with separation. The Palestinian citizens of Israel are discriminated against at an institutional level in every single aspect of life in the democratic State of Israel. Of course, many of the readers will contest this assertion and will think of the existence of many towns and cities in Israel that are Arab and no Jews live there. Yes, that is true, but there are no laws which mandate that Jews cannot live there and there is no doubt about the existence of deep discrimination at every level making these communities the most underdeveloped, under planned, and underfunded communities in Israel.

I assume that Neveh Shalom/Wahat al-Salam uses the Israeli “acceptance committee” law to enable them to select the applicants for residency and in this way, they can control and maintain the population balance. Neveh Shalom/Wahat al-Salam is a small community so under Israeli law they do have the control necessary to stick to their principles of creating a community of equality at all levels by people who consciously make a decision to live together and to build a shared society between Jewish and Palestinian Israelis. They have their challenges – no doubt – especially during times of war, or when the Jewish teens prepare for the military service or on national holidays and significant historical days of national collective memory, such as Nakba Day (“Catastrophe Day,” the Palestinian reference to the 1948 War of Independence). But this is a community of people with the ideology of building a shared society.

I would like to work on launching housing projects in Israel’s mixed cities (Lod, Ramle, Acre, Haifa, Tel Aviv-Jaffa, maybe Nof Hagalil) where we can legally ensure a 50:50 mix of Israeli Jews and Israeli Palestinians – whether it be in buildings with apartments for rent or for sale. There is no existing law in Israel, I believe, that would make this possible at this time. Perhaps we could leverage the law that enables buildings, neighborhoods and whole towns to have a Jewish religious identity in order to open up the possibilities for mandated integrated housing. It might require specific legislation, which is a challenge worth taking up with the current coalition.

The outbreak of violence in the mixed cities this past May should be a wake-up call for the entire country to understand that there are many things deeply wrong in those cities as well as in the relations between Jews and Arabs in Israel. I don’t know how many families in this country and in the mixed cities who would consciously desire to live in integrated housing like in Neveh Shalom/Wahat al-Salam.

I believe there are enough to begin to develop these kinds of buildings and to create more opportunities to deeply impact the ways that we can build a shared society in Israel. I am looking for opportunities to take on this challenge and I invite supporters of this idea to join me in the struggle.

The writer is a political and social entrepreneur who has dedicated his life to the State of Israel and to peace between Israel and her neighbors. He is now directing The Holy Land Investment Bond.