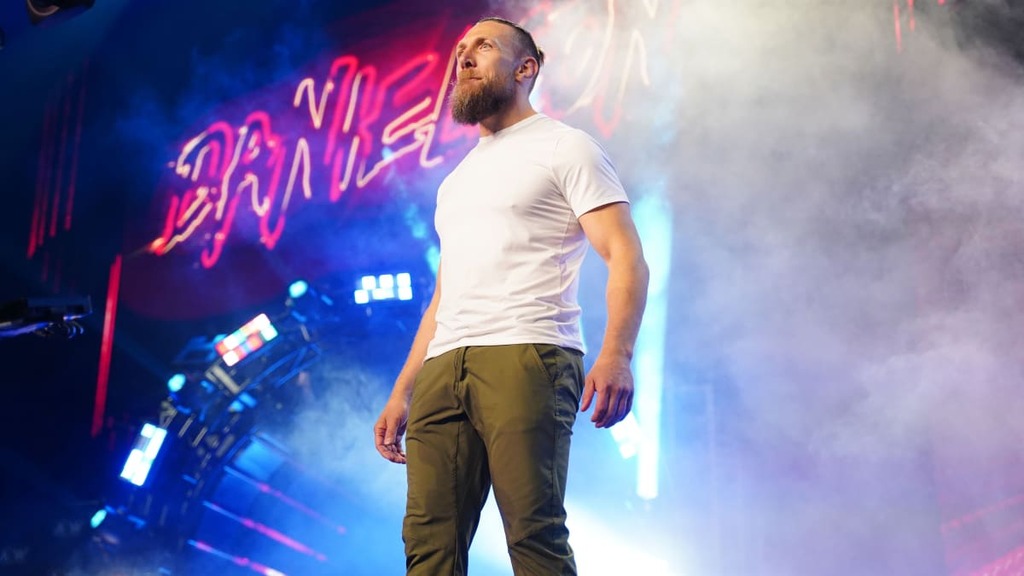 SI.com’s Week in Wrestling is published every week and provides beneath-the-surface coverage of the business of pro wrestling.

Daniel Bryan is now All Elite.

Tony Khan’s latest acquisition is a game-changer. Just five months ago, Bryan—now performing under his real name of Bryan Danielson—worked the main event at WrestleMania 37. His next pay-per-view appearance came Sunday, when he closed All Out by attacking Kenny Omega and The Elite.

Along with Danielson, AEW also debuted Ruby Soho, who in one night was presented better than she was during her entire run in WWE, and Adam Cole, a pillar of NXT for the past four years who revealed himself as the newest member of The Elite moments before Danielson’s emergence. All Out featured an epic performance from the Young Bucks and the Lucha Bros., who set a new standard for a tag-team cage match, CM Punk’s first match in more than seven years and Britt Baker’s continued excellence. If that weren’t enough, New Japan staple Minoru Suzuki flashed his sadistic smile before piledriving Jon Moxley into next week.

Perhaps that was enough for AEW to grab Vince McMahon’s attention.

There is more significance to Bryan’s arrival than just his in-ring work, even with all the dream matches in store (Punk and Bryan’s facing the Young Bucks should be a special feud). AEW is building a core structure that features ECW fan passion and booking, but also includes WCW roster quality, production values and overall financial muscle. This isn’t to insinuate that the end of WWE is near; the company is rich with talent and network money. But AEW’s pursuit of WWE is unrelenting, and there are going to be legitimate ratings battles against Raw and SmackDown.

Khan was smart to market AEW as “the home of professional wrestling.” That is a sore spot for WWE, a proud brand built not on pro wrestling but rather what it calls “sports entertainment.” It is more than semantics to Khan. He wants to provide a home for wrestling fans, ones who are frustrated by constant rematches and repeated story lines in WWE.

So a new race is on. McMahon has competition, and we will see whether the innovator of modern-day success in the industry can creatively out-duel his new opponent.

‘Dynamite’ is a homecoming for Jon Moxley

Danielson’s debut Sunday at All Out was the most significant one to close out a pay-per-view since Jon Moxley emerged from the crowd in 2019 at Double or Nothing.

Moxley also had an eventful weekend, defeating Matt Cardona on Saturday to become the new GCW champion before he was victorious against New Japan icon Satoshi Kojima at All Out. After the win, Moxley was greeted by another icon of the industry in Minoru Suzuki, who ended Moxley’s night with a vicious Gotch piledriver. Moxley is set to meet Suzuki on Wednesday night on Dynamite, a show he is even more excited for than usual.

“Dynamite is in my hometown of Cincinnati, and I’m super f------ stoked for it,” Moxley says. “I brought the wife and the baby to Chicago for All Out, and now I’m going to Cincinnati. I was so focused on that big-ass match with Kojima, and it was a privilege to share that moment with him. Now it’s time to tear s--- up in Cincinnati.”

Long before he was AEW or WWE champion, a teenage Moxley worked at U.S. Bank Arena in Cincinnati. When no one was looking, he would step through the curtains at work, imagining he was a larger-than-life wrestling superstar. His dreams will again become reality on Wednesday at Fifth Third Arena, where Moxley will receive a hero’s welcome from his hometown crowd.

“I was on the event staff as a teenager, and I basically grew up at U.S. Bank Arena,” Moxley says. “I used to watch Cincinnati Cyclones hockey games with like 500 people, and I’d imagine wrestling there one day in front of a full building in the main event. When I’d clock in, I would imagine I was a wrestler storming into the arena. I did main-event multiple shows in that arena. That’s my arena. But for some reason they weren’t interested in hosting Dynamite, so they’re dead to me. Now we’re going to fill up Fifth Third Arena.”

AEW is bringing its collection of stars to Cincinnati, including Kenny Omega, Adam Cole, Britt Baker, Ruby Soho, CM Punk and Bryan Danielson. But there will be nothing quite like the intensity and physicality of Moxley in the ring against Suzuki. They squared off once before in February 2020 in Osaka, a violent encounter won by Moxley.

At All Out, Moxley proudly wore his GCW hoodie, which will likely also make it to Dynamite in Cincinnati. Moxley won the GCW title by defeating Matt Cardona this past Saturday after appearing as a surprise opponent, which now sets up a showdown against deathmatch icon Nick Gage. Amid Moxley’s chaotic schedule, he is grateful for a show at home in Cincinnati.

“Cincinnati is an underserved market,” Moxley says. “We’d never get the pay-per-views or big matches, just lame-ass Raw or SmackDown here or there, but it’s a great wrestling market with a rich history and great fans. I can’t wait to be a part of bringing the best show in wrestling, Dynamite, to them, giving Cincinnati the kind of card it deserves. We’re finally bringing wrestling the way it should be to Cincinnati.”

The (online) week in wrestling

Twitter can often be a negative place, but it’s also just so much fun. Here is Kevin Nash offering some advice to Corey Graves.

What is Finn Bálor watching?

In June 2020, in the early days of the pandemic, Finn Bálor tweeted that he had watched all of Seinfeld.

Immediately, I loved the concept. Here is Bálor—a man who has had tunnel vision his entire adult life, focused and determined to chase his wrestling dreams—finally introduced to Jerry, Elaine, George and Kramer. Growing up in Ireland, Bálor’s Thursday evenings were not glued to the television set watching NBC. So I found it to be a unique story and a different snapshot of a wrestling star, especially during the pandemic.

Ever since, in every conversation we have had, I have asked, what are you watching now? Last week, Bálor—whose real name is Fergal Devitt—shared his current viewing habits.

“I’m hooked right now on the Formula 1 season,” Bálor says. “I’m nonstop watching Twitter, Instagram and all the content F1 is putting out as we get into the thick of the season.”

Bálor lost Friday’s match against Roman Reigns. The story made sense, as he was attacked during his entrance by Jimmy and Jey Uso, and ultimately unable to overcome Reigns in his battered state. It provided a taste of what Bálor and Reigns can create together in the ring, and, while it appears that Reigns is moving on to a confrontation with Brock Lesnar at Madison Square Garden at Friday’s SmackDown, WWE effectively planted a seed last week for the return of “The Demon,” Bálor’s unbeatable alter ego, when the lights briefly flashed red after the match.

Reigns-Demon would be a compelling match for Extreme Rules later this month, and Bálor is ready to reapply the face paint and play some mind games with Reigns—which he can do even more convincingly after watching the nightmarish John Wayne Gacy: Devil in Disguise documentary series.

“Over the last week, I spent a couple nights watching that show and learning about John Wayne Gacy,” Bálor says. “I’d never heard of him, but I’m guessing he was in the news in the U.S. as this mass murderer. He was this real weird, creepy guy, and so many people suffered in that story.”

Like the rest of us who watch WWE on the Peacock app, Bálor was introduced to the show during the NBC ads. And despite the frightening content on display, the series kept his attention.

“There was a conspiracy as to whether he was hiding something or if the police were protecting him,” Bálor says. “It was a really weird and interesting documentary. It was very gripping over the six episodes.”