Bruce Schroeder: Who is the polarising judge in Kyle Rittenhouse trial? 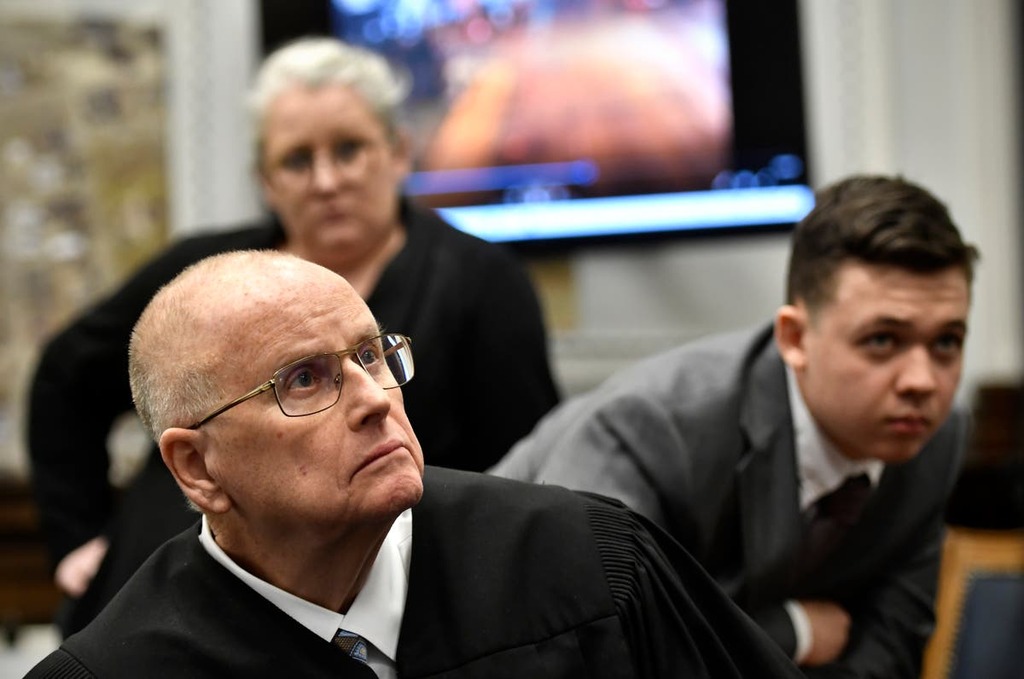 As the nation’s eyes are glued to the televised double homicide trial of Kyle Rittenhouse, broadcast widely across news networks and streamed online by media outlets, viewers have scrutinised the judge presiding over the high-profile case, which has touched on issues of white vigilantism, racial justice protests and the criminal justice system itself.

Kenosha County Circuit Court Judge Bruce Schroeder is Wisconsin’s longest-service active trial judge who, at 75 years old, has said that he has tried more homicide cases than any judge in the state.

His courtroom manner and arguments with prosecutors have drawn significant attention as the trial draws to a close, with Mr Rittenhouse – the Illinois teenager who killed two men and injured another with an AR-15-style rifle when he was 17 years old in the aftermath of protests against police violence in August 2020 – faces a mandatory life sentence if convicted on the most serious charges against him.

In the past week, Mr Schroeder has described a former defendant as “a Black” and burst out into song from the courtroom.

The case of Mr Rittenhouse has gripped the city of fewer than 200,000 people, mired in greater social and political debates both outside and inside the courtroom. The jury heard testimony from a far-right self-described political “commentator” and prosecutors have sought to argue that statements made by Mr Rittenhouse and his behaviour in the wake of the shootings frame his state of mind when he decided to carry a rifle into a heated crowd on 25 August 2020.

Follow the latest updates on the Kyle Rittenhouse trial

Mr Rittenhouse has been hailed as a martyr and patriot by far-right demonstrators and publicly defended by former president Donald Trump. A foundation started by election fraud conspiracy theorist Lin Wood raised $2m for Mr Rittenhouse’s bail. And both Republican and Democratic lawmakers and White House officials have weighed in on the case.

Judge Schroeder has repeatedly sought to establish firm boundaries in the case, with a narrow focus on the events of that night, despite arguments that the broader political implications are inextricably linked. Meanwhile, he has been praised by conservative commentators, while racial justice protesters outside the courthouse have argued that his decisions may impact the jury’s decision.

“This is not a political trial,” Judge Schroeder said on Thursday as the court heard testimony from a conservative streamer who filmed on the streets of Kenosha. “I don’t know how you would isolate a person’s personal politics and determine that person is going to evaluate the evidence one way or the other.”

On Wednesday, Judge Schroeder admonished prosecutors several times over lines of questioning, paused testimony to question the veracity of “pinch to zoom” features on an iPad to review video evidence of Mr Rittenhouse pointing his gun, and forgot to silence his smartphone’s ringtone of Lee Greenwood’s “God Bless the USA”. His phone rang from the bench a second time on Friday.

As the trial opened for the final day of testimony on Thursday, Judge Schroeder noted that it was Veterans Day and asked people in the courtroom to applaud military veterans, after realising that the only veteran there was a defence witness.

Ahead of the trial, the judge reminded the court of his long-held rule forbidding the use of the term “victims” to describe people killed by the defendant, though he left open the door for charged words like “riot”, “looters” and “antifa”.

“This is not a political trial,” Judge Schroeder said on 1 November as jury selection was underway. “It was mentioned by both political campaigns and the presidential campaign last year, in some instances very, very imprudently.”

Judge Schroeder added that he did not want the trial “sidetracked into other issues”, such as Second Amendment rights.

Throughout the trial, with thousands of eyes watching, Judge Schroeder has sought to explain his decisions and rulings thoroughly before the court, rather than simply dismiss objections, and underscore elements of the law in play to those watching.

“He has a reputation for doing what he believes is the right thing and being an independent thinker,” said William Lynch, a retired attorney who served on the board of the ACLU of Wisconsin when Judge Schroeder ruled that sex workers must be tested for HIV in the 1980s.

Judge Schroeder graduated from Marquette Law School in 1970 and worked as a prosecutor before serving as a circuit judge in 1983. His current term expires in 2026.

He is known for quoting the Bible, Shakespeare, past presidents and other judges from the bench, and he played a Jeopardy!-style round of questions with jurors as the Rittenhouse trial was underway.

Judge Schroeder also is aware of his technical and social shortcomings (he called himself a “dinosaur” on Friday), and he appeared sympathetic to defence attorneys who sought to block zoomed-in video evidence by claiming that Apple uses “artificial intelligence” and “logarithms” to create “what it thinks is there, not what necessarily is there”. Judge Schroeder suggested that prosecutors provide expert testimony to dispute that.

He also claimed not to know about some of the topics raised during pretrial hearings – including the nationalist Proud Boys gang, who offered support to Mr Rittenhouse after the shootings. In January, Mr Rittenhouse appeared in a photograph with alleged members as he wore a “Free As F***” T-shirt while making an apparent “OK” hand gesture associated with white nationalists. That image was not shown to the jury.

“The first time I saw it, or a version of it, was Chef Boyardee on a can of spaghetti,” Judge Schroeder said of the hand gesture during pretrial hearings in September. He ruled that such evidence would be too prejudicial.

Earlier this year, an appeals court tossed out part of a sentence Judge Schroeder imposed against a woman convicted of shoplifting; he initially ruled the woman – while on two years of supervised released after a 15-month prison term – had to inform any store she entered that she was on supervision for retail theft.

“We are not persuaded that embarrassing or humiliating defendants with a state-imposed broad public notification requirement promotes their rehabilitation,” the appeals court ruled.

Following the murder trial of Mark Jensen, among Judge Schroeder’s higher-profile trials, an appeals court and state Supreme Court found that he had improperly allowed evidence into the trial.

Mr Jensen was accused of poisoning his wife with antifreeze before smothering her in 1998. Judge Schroeder, who served as the trial judge nearly a decade later, said that a letter to a neighbour from his wife Julie Jensen indicating that her husband would be responsible should anything happen to her would be inadmissible, as Mr Jensen would not be able to cross examine his accuser – his dead wife.

Prosecutors appealed the ruling, and the Wisconsin Supreme Court ordered that the letter be included as evidence.

In May, the state’s high court tossed out Mr Jensen’s guilty verdict and ordered a new trial. The letter will not be allowed as evidence.

“I had it 100 per cent correct in the first place,” Judge Schroeder said in court this month. “That was 20 years ago. The man is still in prison. And the case has again been reversed because of the evidence that the Supreme Court told me to admit.”