Steelers rookie QB Kenny Pickett enters new arena on familiar ground
PITTSBURGH — Just as he had many times during his five-year career at Pitt, Kenny Pickett walked onto the practice…

Tribune News Service
Bob Wojnowski: Schedule is out, and predicting Lions’ record is trickier than usual
It was a reflective moment, a couple days after the Lions finished a draft that was widely praised. Dan Campbell…

Detroit head coach Dan Campbell: "We don't want to draft floaters" for the Lions after declaring "No turds" a year… 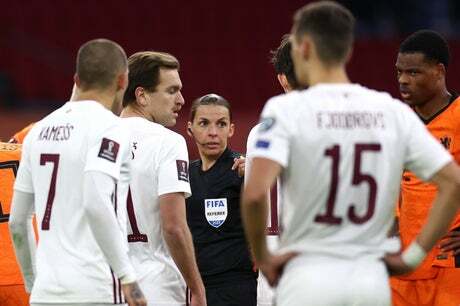 Female referees to officiate at men’s World Cup finals in historic first
A woman will take charge of a men's World Cup match for the first time in history in Qatar, with…

A 30-year-old man has been jailed for 24 weeks for assaulting Sheffield United striker Billy Sharp on the pitch.

RideApart
From analysis to good news, read the world’s best news in one place
50 Years of Title IX: How One Law Changed Women’s Sports Forever

In 1972, no one dreamed a dry, 37-word clause tucked inside a new education legislation would have such a profound…

DENVER — Shortly after he was released from the Arapahoe County Jail on Friday morning, Broncos receiver Jerry Jeudy headed to the team’s facility to meet with coach Nathaniel Hackett.

Jeudy was arrested Thursday and spent the night in custody, charged with a misdemeanor second-degree tampering charge that included a domestic violence enhancer. The police report said Jeudy did not make any “physical contact” with his significant other, who asked the court to dismiss the case.

Even if the case doesn’t proceed and Jeudy doesn’t face legal or league discipline, Hackett was asked if he was disappointed in Jeudy’s judgment (or lack thereof).

“I’ve had an opportunity to talk to Jerry and we’re going to move forward from this, we’re going to learn from it as a team and that’s what it’s all about — there is adversity and it’s how we respond from that adversity,” Hackett said. “That’s so important. Things happen and you just have to learn from them.”

Hackett said “without a doubt” the Broncos have those resources in place.

Hackett and the Broncos welcomed their draft class, undrafted free-agent signings and 11 tryout players to town for rookie camp. Asked if Jeudy’s situation was used as a cautionary example to the new players, Hackett said, “We typically have the things we’ll say — people we want everybody to reach out to. The key is, we’re in this together as a team and as a team, we need to have the right resources so everybody is comfortable with those.”

After meeting with Jeudy, Hackett led his coaching staff and 36 players through the first practice of rookie camp. The tryout players included center James Parker, who played at Cherry Creek High School and CSU-Pueblo.

The practice lasted less than 90 minutes.

“The thing we presented to the guys (Thursday night) is it’s about learning,” Hackett said. “These guys have been training for a combine, they’ve been living on the (pre-draft) circuit and they were so excited to get drafted and not necessarily ready for an NFL practice.”

The Broncos did no team drills during the practice.

“We want to be sure they understand the techniques of each route and all those little details and keep pushing those,” Hackett said. “It’s learning the system, learning the building, learning their teammates, learning their coaches and then just how to be a pro to get out here and practice every day.

“Hopefully, they get a nice, little head start to be implemented with the (veterans) next week.”

Steelers rookie QB Kenny Pickett enters new arena on familiar ground
PITTSBURGH — Just as he had many times during his five-year career at Pitt, Kenny Pickett walked onto the practice…

Tribune News Service
Bob Wojnowski: Schedule is out, and predicting Lions’ record is trickier than usual
It was a reflective moment, a couple days after the Lions finished a draft that was widely praised. Dan Campbell…

Detroit head coach Dan Campbell: "We don't want to draft floaters" for the Lions after declaring "No turds" a year…