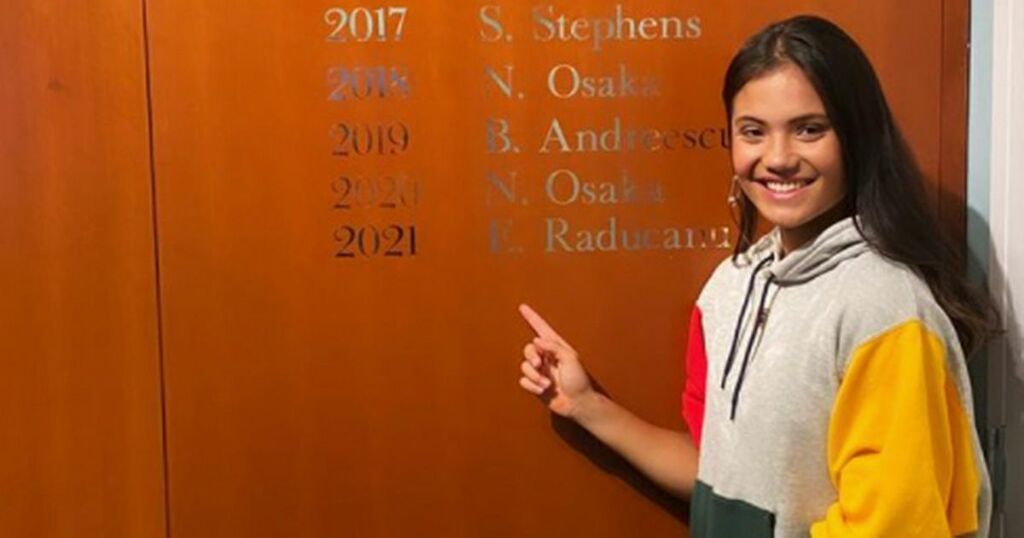 Emma Raducanu continues to rightly make the most of her US Open victory after proudly posing next to her name on the US Open champions wall.

The British superstar posed next to her name, which is forever immortalised as a champion at Flushing Meadows alongside the likes of Naomi Osaka and the legendary Serena Williams.

Along with the picture, Raducanu posted a "stunned" emoji to accurately capture her own feelings as well as those of fans around the world.

The 18-year-old joked that she originally wanted to win enough prize money to replace her AirPods, which cost around £109.

Her victory over fellow teenager Layla Fernandez of Canada in the enthralling final earned her a cheque of £1.8million.

Raducanu’s world ranking has also soared, and she is expected to become world number 23 - a rise of 127 places - after her stateside heroics.

She became the first qualifier - male or female - to win a Grand Slam title and did so without dropping a set, something nobody has done since Williams in 2014.

However, the teenager’s achievement surpasses the American great’s win because she played three extra games just to reach the main draw.

With over nine million people tuning into her 6-4 6-3 win over Fernandez, Raducanu has been showered with praise on social media, including from prime minister Boris Johnson and the royal family.

Raducanu is reportedly set to be in line for a CBE from the Queen while she is the favourite to win Sports Personality of the Year.

Raducanu had reportedly been booked to fly to China to visit her grandma during the US Open final weekend.

However, her US Open win seems to have changed her plans for the foreseeable future - and her dad, who was labelled as particularly scrutinising, admitted Raducanu was better than he realised.