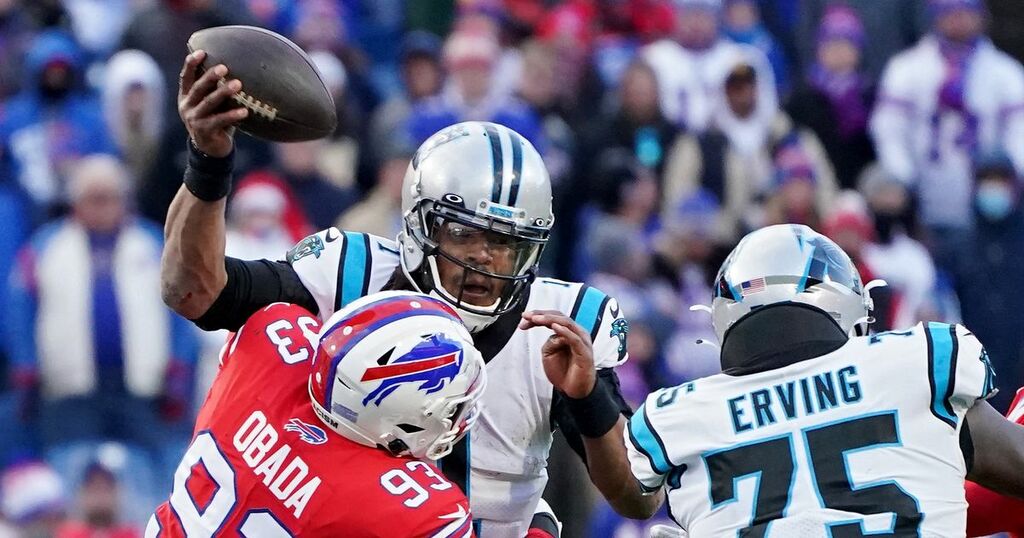 Efe Obada has flown the flag for the United Kingdom in the NFL for the last five years, but now he is taking it into new territory - the playoffs.

His Buffalo Bills finished the regular season with a 11-6 record as they won their second successive AFC East division title.

At 29 years young, Obada - in his fourth season in the NFL - is set to play in the postseason for the first time after three years with the Carolina Panthers.

Looking ahead to his playoff debut against the New England Patriots on Saturday, Obada knows it will be a frosty affair even with home field advantage.

The match is set to be played in some of the coldest weather in NFL history, which temperatures expected to reach minus 25 degrees.

The AFC East rivals have faced each other twice in the 2021 season already, with each team claiming a win.

Obada, who insisted he’s going to use ‘a lot’ of vaseline on his lips, firmly believes the Bills can come away with the postseason win as they eye a return to the AFC Championship Game - and even a Super Bowl appearance for the first time since 1993.

“Once you’re in this building, you know you have to work and do whatever you can to contribute towards the success of the team as a whole,” Obada said.

“I’ve seen the work that we all have put into this, from the coaching staff down to the guys on the practice squad.

“I just know that this is a different environment. This is a special team and what we put out on Sunday is just a reflection of that.”

When asked how different playing for the Bills is to suiting up for the Panthers, the exuberant Obada kept it playful.

“We’re in the playoffs,” he muttered before an infectious smile creeps across his face. “I’m just joking! I think the atmosphere is different.

"When I was in Carolina, we went through a change in management from Ron Rivera to Matt Rhule, and they bring different processes.

A persistent student of the game, Obada has always been around elite defensive minds throughout his time playing American football.

From starring for the London Warriors alongside the Dallas Cowboys’ British defensive line coach Aden Durde to making a name for himself in Carolina blue under Rivera, Obada has learnt from some of the best defensive minds in the business.

His relentless pursuit in perfecting his craft means playing under Buffalo head coach Sean McDermott was the perfect next step.

“He’s a very hands-on type of coach,” Obada said of McDermott, comparing him to Rivera.

“They have similar styles: they try to create a team-orientated environment to give you the freedom to be yourself and have your personality show both on the field and off as well - as long as you’re doing the right things.”

The move from Carolina to Buffalo was made easier by a friendly face, too. Eric Washington is the defensive line coach for the Bills but he became known to Obada as they were both at the Panthers.

Washington served as defensive line coach and defensive coordinator at the franchise, deploying Obada as a weapon on the edge

“Under his system, I felt I was able to develop most as he helped close that gap in terms of my knowledge and skill set,” Obada added. “It was a huge factor in my decision to come here.

“I just need to make sure I can continue to learn and grow because it’s an ever-changing sport.

"I always want to get better and I feel like his system, with his philosophies and way of teaching, is something that helps everybody regardless of whether you’re on the practice squad, an international player programme guy or a vet.

“He treats everyone the same and holds everybody to the same standards.”

Obada has tallied 3.5 sacks in 2021 and he’ll be looking to mark his playoff bow with a fine performance against the Patriots.

In Buffalo’s 33-21 win over New England on Boxing Day, Obada played plenty of snaps as the Bills defence dominated the inexperienced Pats offence.

The Brit is hoping for more of the same on Saturday night in front of the ‘intense’ Buffalo fans, but he is focused on one thing alone - winning.

“I’m here to support and help this team win in any way I can, whether its 50 snaps, one snap, whatever,” the Nigerian-born star declared.

“As long as I’m out there, you’re going to get my best effort.”