Britain’s Top Takeaways: Everything you need to know about Sara Cox

Sara Cox has graced our radios and television screens for over a quarter of a century. She has become a regular figure in many people’s daily lives with her variety of shows.

As well as being a regular voice on the airwaves she has also hosted a number of TV shows. This includes Channel 4's The Big Breakfast.

But how much do you know about her personal and professional life? Here is all you need to know about Sara Cox.

Born Sarah Joanne Cox on December 13, 1974, she later dropped the 'h' from her first name, becoming the Sara Cox everyone would become familiar with. The youngest of five children, she attended Smithills High School until the age of 16 and left Canon Slade School after her A-levels to pursue a career in modelling.

An appearance in the music video for OMD’s 1993 single Everyday followed before she landed her first TV role in 1996. However, she is best known for her work in radio, first joining BBC Radio 1 in 1999.

After joining, Cox launched the popular The Surgery with Mark Hamilton, where she acted as "Nurse Coxy", alongside her co-hosting duties for the Saturday lunchtime show. Her popularity led to landing the massive Radio 1 Breakfast Show presenter gig, where she successfully grew the audience to 7.8 million listeners.

She hosted her final breakfast show on 19 December 2003, effectively swapping with Chris Moyles as she subsequently presented the afternoon drivetime slot. Scott Mills took over this time after replacing her during maternity leave. As well as still being heard on Radio 1, Cox also regularly features on Radio 2, where she hosts her own show on Saturday evenings.

It was revealed in October 2018 that Sara would host BBC Radio 2's Drivetime show. She took over from Simon Mayo and Jo Whiley.

What TV shows has Sara Cox appeared in?

Embarking on this radio career didn’t stop Sara from frequenting our TV screens. Rewinding all the way back to 1998, she became a presenter of Channel 4’s The Big Breakfast, following in the footsteps of her close friend and radio colleague Zoe Ball.

Cox also commentated for the semi-finals of the Eurovision Song Contest on BBC Three with Scott Mills at the 2011 and 2012 Contests, as well as in 2021 when she was a late stand-in for Rylan Clark-Neal. She also presented The Great Pottery Throw Down for BBC Two as well as co-presenting Too Much TV, a daily magazine show, for the same channel.

Other notable TV roles included the dating show Love in the Countryside, Britain's Top 100 Dogs Live: 2019 and Back in Time for Tea. Additionally, in 2019 she hosted an ITV weekend show called The Sara Cox Show as well as presenting BBC Two's Between the Covers the following year.

Sara first married DJ Jon Carter in October 2001, and the couple had a daughter together in 2004. However, the pair divorced the following winter.

Cox then met Ben Cyzer, an advertising executive, in 2006 and have now been together for over a decade and a half. Together they have three children, Renee, Lola and Isaac, and on June 23, 2013, Cox tweeted a picture to announce she had just married her long-term boyfriend and fiancé. 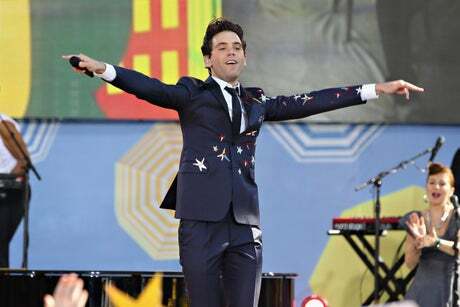 Who is Mika? Everything you need to know about the new Eurovision host
Do you like what he likes?

THE Yes movement is massing in Glasgow this weekend for a major independence march and rally.

Acorn TV is a streaming platform which specialises in international content