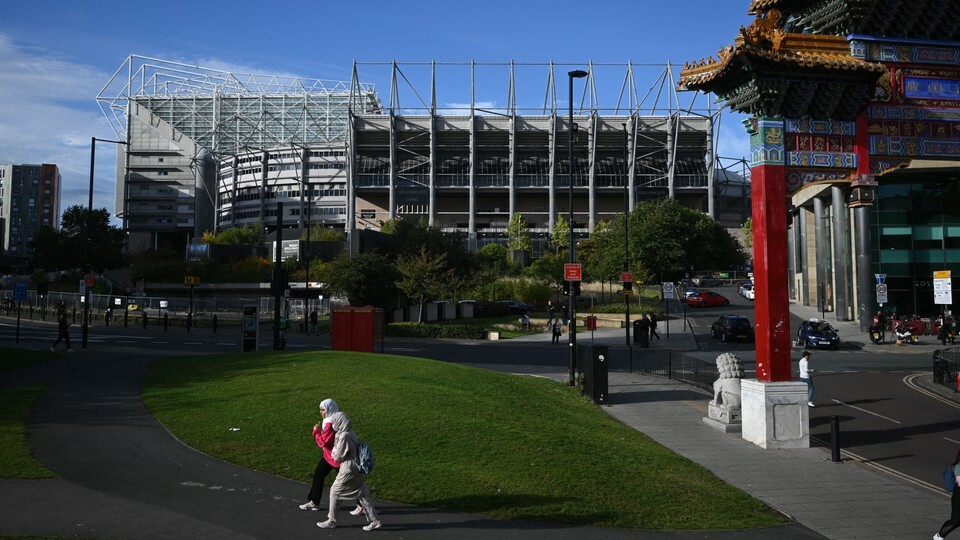 In the northern English city of Newcastle upon Tyne, there is no Duomo di Firenze or Sagrada Familia standing tall, representing the city, its soul and spirit. There is no St. Paul’s Cathedral, Notre-Dame, or Basilica di San Marco. No, in Newcastle, the cathedral and castle are of secondary importance—so too the Roman wall built by the emperor Hadrian. In Newcastle, the soul of the city is its great, hulking, lopsided (and somewhat dilapidated) soccer stadium, St. James’s Park, which rises above the skyline right in the center of town.

And now that stadium, and the beleaguered soccer club that occupies it, is owned by Saudi Arabia—or at least its sovereign wealth fund.

You might expect that this would be controversial in Newcastle. This is not any old country buying an English soccer club. It is a country run by the man the United States concluded to have ordered the dismembering of a journalist, a country conducting a brutal war in Yemen that is among the most barbarous in the world.

And yet, few in Newcastle seem to care. I mean, why should they? Their rivals in the English Premier League are already owned by some pretty unpleasant regimes or people: Manchester City is controlled by Abu Dhabi, and Chelsea by a Russian oligarch with ties to the Kremlin. What’s the point in turning down someone’s money if nobody else is? The fixer who facilitated the Saudi takeover has, incredibly, insisted that the Saudi state was not taking over Newcastle’s soccer club, but rather its sovereign wealth fund, which, the fixer said, genuinely cared about human rights. Both, of course, are run by Crown Prince Mohammed bin Salman.

Beyond this cynical piece of performance art, however, the Newcastle United sale is emblematic of something far more fundamental and depressing about the state of Britain.

The English Premier League is a product conceived and raised in a different era, before the global financial crisis, Brexit, and Donald Trump. It is an example of open, European, capitalist Britain—a Britain having it all, and winning. The league is the richest and most-watched in the world, with investment and ownership rules that are far more open than its peers’, all while operating within a greater European structure but selling itself more aggressively to the world than any competitor. It’s rather like London’s financial sector before Brexit: the biggest player within a wider European network, but more global in its reach, culture, and investment than its rivals. Newcastle’s club will soon be able to compete with the best of European soccer because it will be richer. This is capitalism in action (or, at least, petro-fueled, state-rigged capitalism).

In fact, this model was rather like the Britain that emerged from Margaret Thatcher’s revolution of the 1980s. It is largely forgotten now, but this titan of conservatism did more than any other prime minister before or since to deepen Britain’s integration in Europe (save for Edward Heath, another Tory, who took Britain into the bloc in the first place). For Thatcher, the great goal was a single European market that Britain could grow rich from, and so she opened the country up to foreign investment from around the world, trumpeting it as the most economically liberal, safe, and business-friendly in Europe. For Japanese and American investors, Britain became the gateway to the European market.

Yet, what was the upshot? According to David Edgerton’s The Rise and Fall of the British Nation, Thatcher’s reforms did not lead to what she intended. She had wanted to resurrect British capitalism and its place in world affairs. After all, British money had once washed around the world, buying up assets for British companies. As late as the 1960s, Edgerton writes, Britain was far and away the wealthiest place in Europe. By the 1980s that was no longer true, Britain having instead chosen to try to build a distinctly national economy, with nationalized industries and assets.

Thatcher’s policies did not reinvigorate British industry. In Edgerton’s words, “the United Kingdom ceased to have a distinctly national capitalism and became instead a major financial centre, now largely for the capital of others.” Over the next 30 years, Britain, and London in particular, became ever more enmeshed in the global economy before it all came crashing down in 2008, destroying the economic and social model built on its profits.

Edgerton argues that Brexit, in some sense, was a cry for the reemergence of national control. For ordinary workers—including those who live in poorer parts of the country such as, to give an example, the region surrounding Newcastle—this is, surely, understandable. The vote to leave the European Union was not, in this reading, some kind of imperial reflex, but rather the opposite: a longing for the kind of world that existed in Britain after empire, when the economy was national, not international.

[Read: The minister of chaos]

The English Premier League and its fans, however, plow on as if nothing has happened: In Newcastle, on hearing the news, supporters arrived at St. James’s Park, some wearing fake headscarves, to celebrate their club’s newfound riches.

Taken together, all of this feels nationally incoherent. We listen to Prime Minister Boris Johnson telling the Conservative Party at its annual conference this past week that Brexit was the necessary medicine to overhaul the British economy, to make it more British and high-skilled and well-paid. He even boasts how he saw off a planned European super league that, he says, would’ve hollowed out the Premier League by creating a pan-European version. This, he told me, reflected the “deracinated” nature of modern life, in which people are unmoored from their national surroundings. And clearly there is a sense of people feeling deracinated within a global economy over which they have no control.

Yet here we are, a nation presiding over the most global sports league in the world, allowing our clubs to be bought by anyone, so long as they have loads of money, because that will create the best product to sell to the international market.

The Newcastle takeover feels somehow born of another era and emblematic of the future. It is a deal from a time when Britain didn’t care where money came from as long as it came to Britain; when we were China’s best friend in the West, uncaring toward that country’s human-rights abuses; and when London was home to anyone who wanted to spend their dirty cash. Yet is the takeover not also a glimpse of the country’s present, and its future too? The recent spate of news stories tied to the release of the Pandora Papers point to London’s central role in the global tax-avoidance industry. That era was supposed to be over, shocked out of existence by Brexit and Boris Johnson. And yet it remains.

Newcastle certainly seems to have gained something from this deal. But hasn’t it lost something too, something that can’t be measured in pounds and pence? What happens to its cathedral of football once it has become a laundrette for someone else’s reputation?