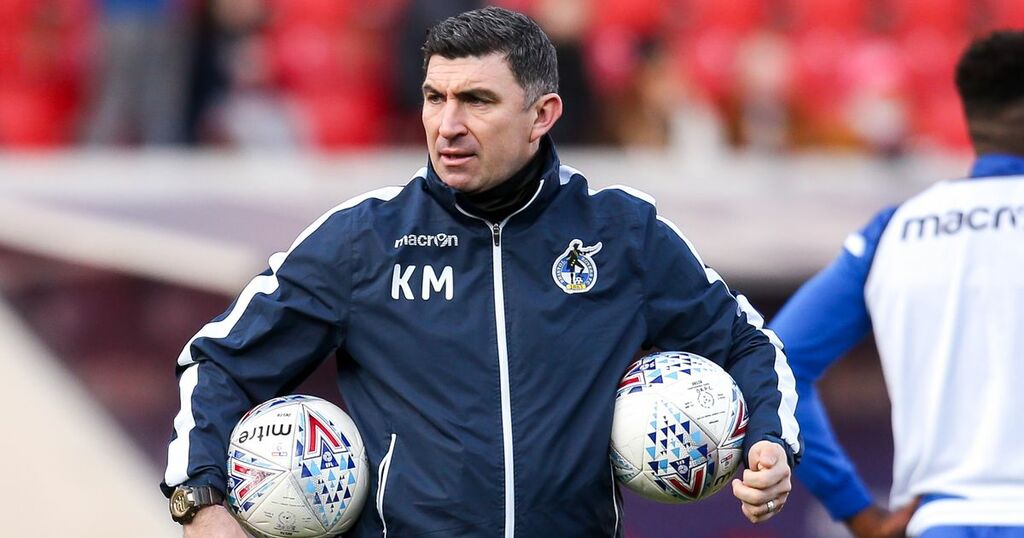 Amid the chaos which has engulfed Bristol Rovers in recent times, one member of staff has stayed the course: first-team coach Kevin Maher.

The 44-year-old is onto his fourth manager at the Mem after first arriving under Graham Coughlan’s leadership in the summer of 2019.

It is a huge compliment to the London-born Irishman that he has survived. Dozens of players and support staff have been and gone in Maher’s time at Rovers, and he remains an important cog in the machine.

His remit has been adapted this year to include responsibility for Rovers’ under-23 squad, and as a result he will effectively take charge in the dugout for the Papa John’s Trophy tie against Chelsea’s under-21s alongside Joey Barton on Wednesday.

With long away trips to Bradford and Colchester looming over the coming week, the Gas are certain to rest their key players for the EFL Trophy group stage tie at the Mem, giving a chance to the youngsters Maher has had a close eye on of late.

And for all the turbulence he has ridden and change he has witnessed since his arrival, Maher continues to enjoy himself at Rovers.

“When you look at the two and a half years I’ve been here, obviously we had the pandemic and everything that’s gone with that,” he said.

“A bit of a rollercoaster, but I really like the club. It’s a brilliant club and I think we have to remember that. There are a lot of good people around the place.

“You have to adapt yourself to work with the manager and what their needs are and support them in the right way, giving your opinion when it’s called upon.

“I can’t ask any more of all the managers, really. It’s not always worked out, which is disappointing, because I think that reflects on everyone, but we’re working hard to turn it around and get the Gas to where we want them to be.”

With more than 450 EFL appearances under his belt from an impressive playing career, it is no surprise Maher knows what it takes to have longevity at the level – putting his adaptability to good use under Coughlan, Ben Garner, Paul Tisdale and Barton.

“Everyone’s different,” he said. “You take a bit of everyone and you try to adapt to how they want to work and how I work.

“(Joey has been) brilliant. We’ve won two of the past three and hopefully things are beginning to turn.

“We’ve been slightly disappointed with the results so far this season, we know that, but we know we’re getting better.

“The gaffer’s been inclusive, we’ve all been part of it, and we’re all working hard to get positive results for the Gas.”

In Chelsea, Maher believes Rovers will are facing one of the best academies in England, and the side the Blues brought to the Mem at the same stage of last year’s competition was a display of the mind-boggling level of talent in their youth ranks.

Billy Gilmour and Danny Drinkwater were the headline acts as Rovers snatched a last-gasp 4-3 win, but since that game Tino Livramento has established himself as key player for Southampton, Tino Anjorin is on loan at Lokomotiv Moscow and Lewis Bate has been sold to Leeds United for more than £1million.

The conveyor belt keeps rumbling on and Maher is certain Rovers will be challenged by Chelsea’s young stars.

“When you look back to the game last year, they came very strong and I think it’s a competition they take quite seriously as it’s a chance for them to showcase their academy,” he said.

“We know how good it is. Obviously, Jack Mesure was here with us last year and I spoke to him a lot about how they work. It’s probably one of the top academies in the country and they take the competition seriously, and rightly so.

“We’re under no illusions, they will want to get a result and show how good they are as young players trying to forge their way in the game, and possibly one or two more senior owns that might drop into is as well.”

Youngsters and academy graduates will have a platform to impress Barton and further their chances on Wednesday, but Maher stresses the game is not make-or-break for any of Rovers’ fledglings.

Zain Walker, Pablo Martinez, Kieran Phillips and Tom Mehew are among those expected to be given game time, with the latter trio having impressed for the Development Squad last week against Forest Green.

“It’s just another step on some of their journeys,” he added. “The ones that are in the squad, we need to get them playing.

“Another home game at the Mem under lights, which is always good, so I think it will be a good game for everyone concerned. Those coming in will have that opportunity. Hopefully they take it.”

The EFL Trophy format is often maligned, and rightly so, with crowds poor across the pyramid as some fans choose to boycott after the inclusion of Premier League academies.

But it does have its positives and a win on Wednesday will see the Gas secure progression from Group M and into the second round after they beat Cheltenham Town in the competition opener in August.

“We won the first game and if we get a result tomorrow night we’ll progress, but it’s a tough one against Chelsea and we’ll have to be at the top of our game,” Maher said.

“Players have to perform and this is a good one for them to go out and express themselves with a bit of freedom and there’s nothing to fear. Go and show everyone how good you are, and if we can get a positive result, brilliant.”