About the same time the Brisbane River peaked, Jenni Metcalfe came back to Grey Street at West End to check on her home.

“We came back on Monday morning and the water was right up,” she said, pointing at the tide mark about 1 metre up the back wall.

“So I sat in the gutter and watched it and cried.”

Some of the lower-lying parts of West End – Brisbane’s eclectic inner-city suburb on the south bank of the flooded “brown snake” river – went underwater on Sunday and Monday as downpours began to ease but tides reached their peak.

Queensland authorities estimate 15,000 properties sustained damage in the flooding, caused by a “rain bomb” weather system that dumped more than 1 metre of water on most of the city. The volume was roughly equal to 80% of Brisbane’s annual average rainfall.

Data from the Bureau of Meteorology revealed a string of broken records from the flooding rain in Queensland.

In the six days from 23 to 28 February, at least 33 places recorded more than one metre of rain, including 1.77 metres falling at Mount Glorious, just east of Wivenhoe Dam that helps reduce flooding in the city.

Parts of south-east Queensland had at least 2.5 times their average rainfall for the month, with some areas getting five times the average, the bureau said.

The rain fell fiercely without respite for more than three days. Brisbane’s rivers and creeks filled, then spilled into the suburbs, in some cases inundating homes that did not flood in 2011, when 33 people were killed in Queensland and much of the capital was underwater.

On Saturday and early on Sunday, those at risk frantically moved their most valuable belongings to high ground.

Metcalfe said she was walking along the river on Saturday and noticed the tide rising.

“But I had no idea that my place would be affected.

“On Sunday morning I woke up to [housemate] Michelle banging on my door, saying we have to get stuff up. I came downstairs and before I could even think about how to get stuff up, the previous owners of this place with their two little girls came down, Rog from up the road came down, and they all helped to move stuff upstairs.”

Metcalfe said her neighbour’s yard went under on Saturday night.

“We were watching the Hills Hoist in the neighbour’s yard, which still had clothes on it. We watched it go lower and lower as the water came up.”

After evacuating on Sunday afternoon, Metcalfe stayed with her housemates, who were in the process of moving into a nearby unit they had recently bought. They and other friends and neighbours came back on Tuesday morning to broom out the remaining water and clean down the walls.

“I didn’t sleep much Sunday night or Monday,” she said.

A few blocks away in West End, several large apartment buildings were flooded in, water blocking entry and exit.

Michael Raj watched on Tuesday as workers pumped water from the basement floors of his building. He said he had likely lost some items that were stored there.

“We live just up on the third floor and we were able to stay there as it came in. We didn’t try to come down or anything, figured it was safe to be up there. But absolutely, we didn’t expect it.”

In other parts of the city, as the clean-up continues, masses of hard rubbish are accumulating on footpaths.

Almost 40,000 properties were without power on Tuesday morning. Most schools in southeast Queensland will reopen on Wednesday. Hundreds of roads remain cut by flood waters.

“And honestly, I don’t think anyone was ever expecting that we get this on the top of a two-year pandemic.”

Palaszczuk said the Brisbane River would remain at an elevated level for the next three to four days as water was released from Wivenhoe Dam to ensure flood mitigation capacity remained in place.

The Bureau of Meteorology says a possible severe thunderstorm could hit Brisbane on Thursday afternoon, bringing damaging winds and localised heavy rainfall, which may lead to flash flooding. 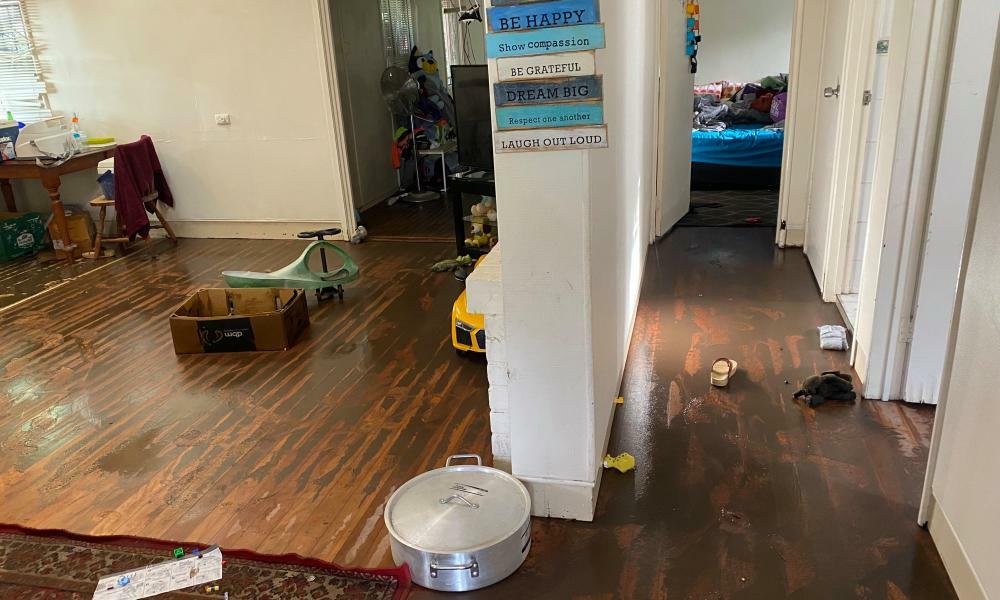 Queensland floods: clean-up begins for some Brisbane residents while others brace for river’s peak
Flood waters have started to invade the city’s central business district and riverfront areas

Brisbane families returning to their flood-affected homes say the water levels rose hard and fast, and took many by surprise.

ABC News
What caused the ‘rain bomb’? How the unprecedented Queensland and NSW 2022 floods unfolded