Brisbane and south-east Queensland's weekend of wild weather and flooding, in pictures

About a week ago, the weather bureau issued a warning: heavy rain would bring flash flooding to parts of Queensland and NSW.

In the days that followed parts of south-east Queensland received "scary" amounts of rain, dams from the Sunshine Coast to the Gold Coast hit capacity, and the region braced for major flooding.

Last Wednesday more than 400mm fell in less than 24 hours near Gympie, and parts of the Sunshine Coast received 140mm in just one hour.

Queensland Premier Annastacia Palaszczuk warned that "over the coming days, some areas will see a month's worth of rainfall".

Then the "astronomical" amount of rain continued into Friday, with Wide Bay and the Sunshine Coast receiving, as the Premier foreshadowed, a month's worth of rain just one hour.

By Saturday more people around Brisbane started to witness their suburbs fill with water.

Flood warnings were issued for the Brisbane River on Sunday, and riverside suburbs in the city and the Ipswich area saw more roads go under water.

One of the hardest-hit areas was Goodna, a suburb on the edge of Ipswich.

In just two to three days, Brisbane received about 80 per cent of the rainfall it would normally get over the whole year, Ms Palaszczuk said on Tuesday.

More than 30 suburbs across the south-east received more than a metre of rain.

Then during high tide on Monday morning, the Brisbane level peaked at 3.85m — its highest level since the 2011 floods.

The Brisbane River's levels receded slightly after the peak on Monday morning, but there was little reprieve for areas affected by flooding.

During the evening high tide, the river rose again to peak at 3.41m. Authorities said the scale of the event could not have been predicted.

And the weather event is not over yet.

Thousands of homes are flooded in northern NSW and many residents are still trapped while waiting for floodwaters to subside.

A severe weather warning remains in place for heavy rain and high winds along the NSW coast, which could cause more damage and flooding.

There is also a low-pressure system off the NSW coast, which authorities expect to cause moderate flooding in parts of western Sydney.

The flood threat in south-east Queensland isn't over yet either, with a high chance of rain forecast for the end of the week and this weekend. 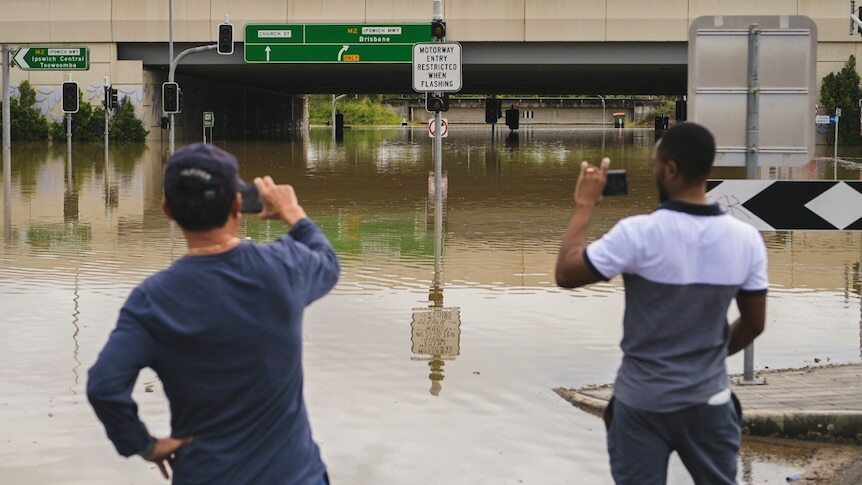 Brisbane River to see another major peak as south-east Queensland reels from weather emergency
Thousands of people without power in Queensland could be waiting days to get it restored, as emergency services find the…

ABC News
Queensland and NSW weather updates: Brisbane River falling with the tide as Lismore deals with flood emergency — as it happened

The Brisbane River is falling with the tide after peaking at 3.5m overnight, but is expected to reach 3.7m in…

ABC News
One subscription that gives you access to news from hundreds of sites
The Loop: NSW's severe weather moves south, flood warnings still in place in Queensland and the 2021 Dress of the Year