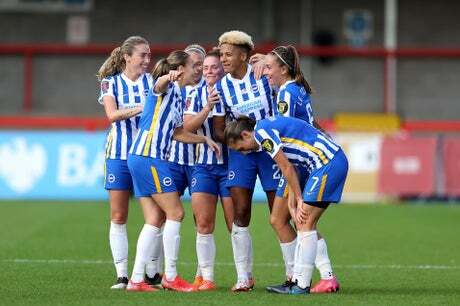 Tottenham were denied the chance to move top of the Women's Super League table after Brighton ended their perfect start to the season.

Lee Guem-min fired the hosts ahead in the first half with a low drive past Spurs goalkeeper Rebecca Spencer.

Things went from bad to worse for the north Londoners after the break when striker Rachel Williams was shown a red card following a second booking.

Ten minutes later and Victoria Williams doubled the lead for the Seagulls. Spurs's Kit Graham hit back within two minutes but it was too little too late for Tottenham, who are three points behind north London rivals Arsenal at the top of the table.

The defeat on the south coast brought an end to a fine start to the season from Spurs, who had won four games from four in the WSL heading into this weekend, having only concede one goal during that run.