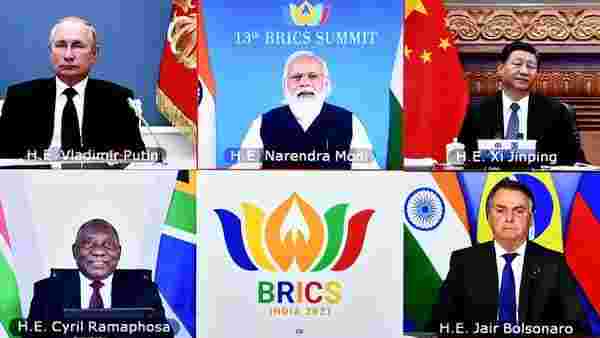 Brazil, Russia, India, China and South Africa also known as the BRICS countries on Thursday urged the need to prevent Afghanistan from being used as a staging ground for terrorist attacks against other countries as well as a sanctuary for terrorists.

The five key emerging economies also stressed the need to foster an inclusive intra-Afghan dialogue to ensure peace, stability and order in Afghanistan in the Delhi Declaration which was issued after the 13th meeting of the grouping.

The strains on the global economy caused by covid-19 and ways to ensure speedy recovery were also discussed at the summit held on the occasion of BRICS’ 15th anniversary. BRICS accounts for 41% of the world’s population, 24% of global GDP and has over 16% share in world trade. Since 2006, BRICS countries have come together to deliberate on important issues under the three pillars of political and security, economic and financial and cultural and people to people exchanges.

In his opening remarks, Prime Minister Modi said that setting up institutions like the New Development Bank, the Contingency Reserve Arrangement and the Energy Research Cooperation Platform were some of BRICS key achievements so far. The agreement on Remote Sensing Satellite Constellation among the space agencies of BRICS countries was a “new chapter of cooperation," he said.

Speaking at the summit, Russian president Vladimir Putin slammed the withdrawal of the US and its partners from Afghanistan after what he called their “experiments" with democracy leaving chaos and destabilisation in their wake.

After almost two decades of stay in Afghanistan, the US and its partners exited the country on 31 August. This was in accordance with the terms of an agreement signed with the Pakistan backed Taliban in February last year. The Taliban quickly launched a massive military offensive and took over Kabul city on 15 August, causing the collapse of the Ashraf Ghani government. Russia, India and Iran were part of an anti-Taliban alliance when the group was in control of Afghanistan previously between 1996-2001.

The BRICS joint statement called for “refraining from violence and settling the situation (in Afghanistan) by peaceful means."

“We underscore the priority of fighting terrorism, including preventing attempts by terrorist organizations to use Afghan territory as terrorist sanctuary and to carry out attacks against other countries, as well as drug trade within Afghanistan. We emphasise the need to address the humanitarian situation and to uphold human rights, including those of women, children and minorities," it added.

In his remarks, Ramaphosa spoke of the need to “ensure equal access to covid-19 vaccines, diagnostics and therapeutics because that is the only way we can collectively respond to this pandemic that engulfs the world."

In the joint statement, the leaders said they regret the “glaring inequity" in access to vaccines, diagnostics and therapeutics, especially for the world’s poorest and most vulnerable populations. However, they fell short of fully endorsing the proposal to waive patent on covid vaccines, moved by India and South Africa at the World Trade Organisation (WTO). “We, therefore, recognize the importance of safe, efficacious, accessible and affordable vaccines. In this regard, we note, inter alia, the ongoing discussions in the WTO on a covid-19 vaccine Intellectual Property Rights waiver and the use of flexibilities of the TRIPS Agreement and the Doha Declaration on TRIPS Agreement and Public Health," the statement said.

“We note that the cooperation on study of origins of the SARS-COV-2 is an important aspect of the fight against the covid-19 pandemic. We support science-based, inclusive of broad expertise, transparent, and timely processes, free from politicization or interference, to strengthen international capabilities to better understand the emergence of novel pathogens and to help prevent future pandemics," the statement said. China, where the first outbreak was reported in late 2019, has been sensitive about calls to investigate the origin of the pandemic especially by the US.

The joint statement also said that the BRICs leaders “recognize that the macroeconomic stability of the BRICS economies will play a major role in achieving global recovery and stability and called for better international preparedness and enhanced cooperation to fight the pandemic and other current and future health challenges through the mobilization of political support and necessary financial resources."

The five developing economies said they reiterate support for the necessary and urgent reform of WTO which would preserve the centrality, core values and fundamental principles of the WTO and consider the interests of all members, including developing countries and least developed countries, recognizing that the majority of the WTO members are developing countries. “It is critical that all WTO members avoid unilateral and protectionist measures that run counter to the spirit and rules of the WTO. We emphasize the primary importance of ensuring the restoration and preservation of the normal functioning of a two-stage WTO Dispute Settlement system, including the expeditious appointment of all Appellate Body members," they said.

The BRICS countries finalized Agreement on Cooperation and Mutual Administrative Assistance in Customs Matters and encouraged customs authorities to further cooperate in such areas as joint enforcement network, capacity building and administrative assistance. However, a long pending proposal by India to set up a BRICS credit rating agency to challenge the existing agencies did not find mention in the joint declaration.