Brian Houston still wields soft power in Washington. What does that mean for Australia? 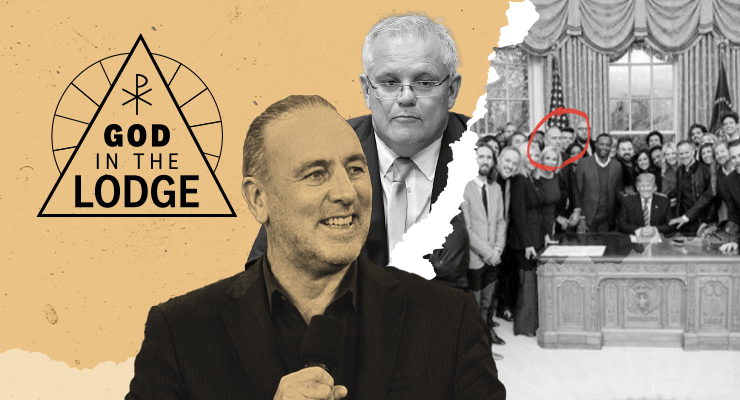 This story is part 10 in a series. For the full series go here.

In 2019 Scott Morrison tried hard — and failed — to have his friend and mentor Pastor Brian Houston invited to an official White House dinner with Donald Trump. But within weeks, Houston went one better. He made it into the Oval Office where, a photograph records, he stood literally at the right hand of the president of the United States.

How he arrived there tells us a great deal about Brian Houston’s network of religious-political players and the pastor’s own soft power in Washington. It is the same kind of network that brought five leading US Senators to Houston’s Hillsong Church in Sydney’s outer suburbs in the months before the White House meeting with the president.

On December 6, 2019, Houston attained the Holy Grail the prime minister had been unable to deliver: he gained access to the Oval Office. And there he was, with a group of evangelical worship leaders for an hour-long “faith briefing” with then-vice-president Mike Pence before a photo opportunity with the president.

The key organiser was Paula White, a prominent televangelist and Christian Trumpist who preaches the prosperity gospel. Pastor White, who became known as the president’s spiritual adviser, was also chair of the evangelical advisory board for the Trump administration.

Over the life of the Trump presidency the board was able to claim victory in several policy areas, including Trump’s order to ban transgender individuals from serving in the US military, as well as framing Trump’s executive order establishing the White House Faith and Opportunity Initiative, which promoted the role of faith-based groups in civil society.

Dr Andy Rowell, a professor at Bethel Seminary in Minneapolis, has done a breakdown of the 40 or so “worship leaders” who attended the Trump meeting and were photographed in a close huddle around the leader of the free world.

Rowell’s analysis shows a large contingent from the evangelical charismatic mega-church known as Bethel church, led by pastor Bill Johnson — the very same Bill Johnson who had been invited to preach at Houston’s Hillsong church. The Bethel church is identified with a breakout pentecostal Christian movement known as the New Apostolic Reformation (NAR), which seeks to transform society by conquering the Seven Mountains of Influence: education, religion, family, business, government, entertainment, and media.

Rowell’s breakdown also includes an Instagram image of Brian Houston inside the White House with Christian singer-songwriter and former Bethel church worship leader Sean Feucht, who ran as a Republican candidate in California in 2020, and who refers to the honour of being with Houston, “THE BOSS THE EAGLE THE LEGEND”. Feucht ran on a hardline right-to-life platform and attracted criticism by holding a live performance at the height of the US COVID outbreak.

So what’s the attraction of Houston to American evangelists and politicians alike?

“Brian Houston is among the top 20 most well-known pastors in the world,” said Rowell, who was a pastor from 1999-2005 and who now teaches those training to become pastors.

“Hillsong music is extremely popular. It’s used in a huge number of churches in the US. In the case of the senators who went to Australia, I would say they looked at Houston and saw a handsome guy who is a great speaker, a guy who has been really successful, an entrepreneur with some really cool dynamic churches.

“And when they travel to Australia they act like tourists, taking a trip out to the Hillsong church — it’s something they can tell their family about back home.”

Rowell told Crikey that it “says something” about Houston’s ability to wield influence that more than half of Republican senators are evangelical Christians.

“I don’t think pastors like Brian Houston know the world of politics and issues so well. The connections are more about individual morality and their fear of creeping secularism,” he said.

“The emphasis of these conservative politicians and pastors is to protect religious freedoms and to get rid of government regulation. They see the poor as this lower class of people who can’t be helped and who need to work harder. They equate helping the poor with communism or socialism.”

Rowell said that Brian Houston had been “naive” to be pictured with Donald Trump.

“The Trump administration’s strategy is to use these worship leaders, who have big Instagram followings, to amplify what Trump is doing for evangelicals. But it should be sobering for Houston and others to realise that they are being used to boost President Trump’s popularity,” Rowell summed up.

So who needs the Australian embassy when you have the Republican evangelical pastors?