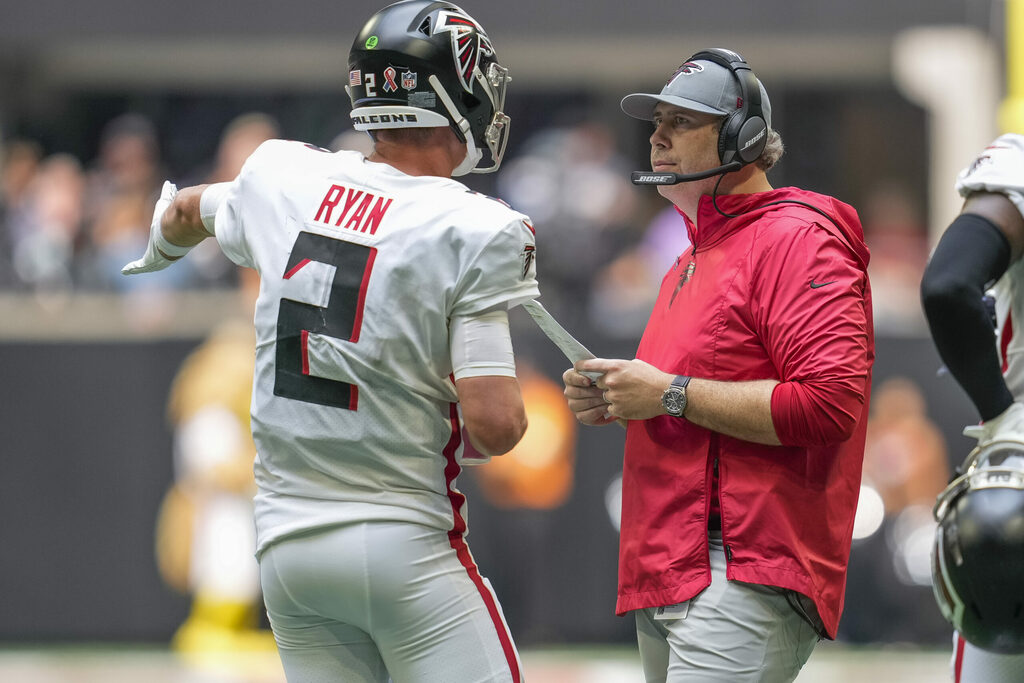 There is plenty of blame to go around after the Falcons’ demoralizing loss to the Eagles in Week 1. Both teams featured first-year head coaches, but one was obviously more prepared than the other. It’s important to understand that there will be bumps along the way, and Atlanta wasn’t able to address many of the areas on the roster that desperately needed an upgrade due to the salary cap.

NFL Network analyst Brian Baldinger dove into the Falcons’ opening drive and pointed out some key issues on his Twitter account.

.@AtlantaFalcons there is so much wrong with this play that I don’t know where to begin. How can this happen? Especially when you are 3 stinking yards from a TD? #BaldysBreakdowns pic.twitter.com/FnRSuZ08Z4

“I watch this play and I go — what are the Falcons doing? How could you possibly put Mike Davis on Fletcher Cox?” asks Baldinger. “The guards are blocking grass.”

The play featured above came on the three-yard line of the team’s opening drive. Jalen Mayfield, who was lined up on Fletcher Cox, pulled and swung to the right side of the play to sell the play action fake. This left Davis in a one-on-one matchup with Cox in the face of Matt Ryan.

Without having any knowledge of what the play design was or the actual call itself, I come away with two observations not mentioned by Baldinger. First off, it seems as if Ryan was supposed to slide to the right side with the pulling guards. Mayfield and Chris Lindstrom created a pseudo-pocket for Ryan that was left vacant. Perhaps this is on Ryan, but we obviously don’t know for sure.

Secondly, left tackle Jake Matthews comes in late to help center Matt Hennessey, but clearly Davis needs more help. Cox blows up Davis and Javon Hargrave beats Hennessey, which forces Ryan to sail the ball over an open Russell Gage in the end zone. The Falcons came away with only a field goal.

.@AtlantaFalcons just one question; where is @kylepitts__ ? Not on your goal line offense? Hopefully it was an injury or equipment issue. This offense needs him on the 3 yard line…..badly. #BaldysBreakdowns pic.twitter.com/MRvPEtCFwN

“I have no idea what they are doing here,” continued Baldinger. “No idea why the guards aren’t helping Matt Hennessy at center. He’s getting destroyed by Javon Hargrave.”

Baldinger then wonders aloud why Kyle Pitts is absent from the play. The same player who had 12 touchdowns for Florida last year is not on the field at the three-yard line. This is an area where Atlanta struggled a season ago. In place of Pitts, Hayden Hurst ran a shallow, underneath route but was blanketed by Eagles linebackers.

So, where was Pitts? Perhaps Smith kept Hurst and Pitts on a snap count to keep them both as fresh as possible. And while this isn’t such a bad strategy if it works, when it doesn’t, people are going to start asking why Atlanta’s top-five selection is not in the game.

.@AtlantaFalcons just gonna come back next week. Watching Sundays action is too frustrating . Gonna give ya an opening day “Mulligan”! Have a great week of work. Hint: it starts up front #BaldysBreakdowns