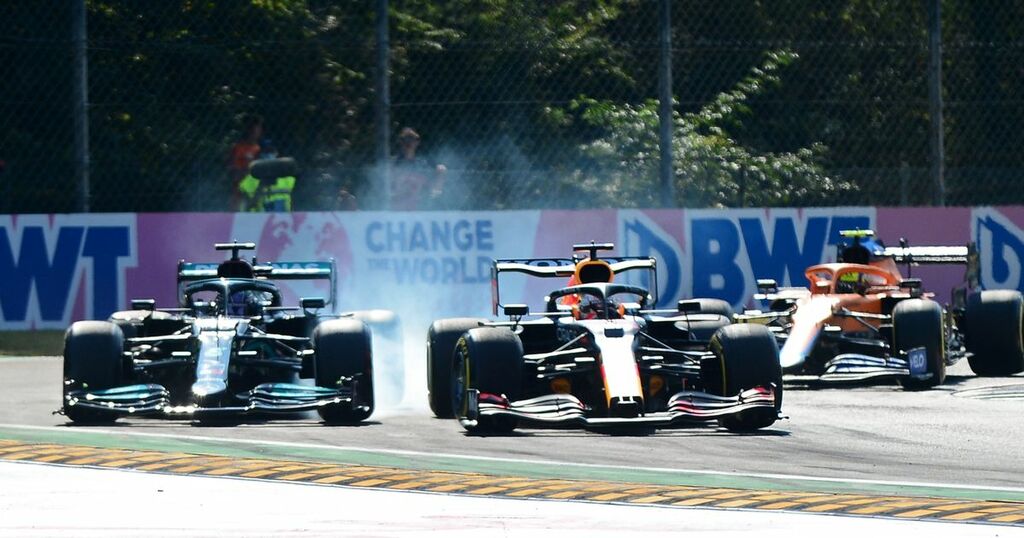 Lewis Hamilton and Max Verstappen crashed out of the Italian Grand Prix on the same corner at Monza on Sunday after colliding into each other in a bizarre incident.

Hamilton had just left the pit lane and re-entered the track but Verstappen flew up on his left hand side before trying to squeeze his rival out on the next bend.

Verstappen's car then looked unsteady as it bobbled over the curb on the bend, before the wheels of his Red Bull came together with that of Hamilton's Mercedes.

The clash forced Verstappen's car up into the air as both vehicles skidded off the track, with the Red Bull eventually resting on the nose of Hamilton's Mercedes and forcing both drivers out.

Who was at fault for the crash? Comment below.

It is the first time Hamilton has failed to finish in 63 starts and he trudged off disappointed after Verstappen had already begun his dejected walk back to the pits.

Once there Verstappen - who leads Hamilton by just three points in the drivers' standings - fumed to his colleagues: "He didn't leave me any space."

Following the race, Hamilton himself said he was feeling "a little bit stiff".
He said: "A bit sore of my neck to be honest, because it landed on my head. But I'll be OK.

"I was racing as hard as I could, finally got past Lando, I was in the lead so they pitted me, pit-stop was obviously slow, lost a couple of seconds.

"Came out, saw that Daniel came past, Max was coming, I made sure I let a car's width on the outside to him. I went into Turn One and I was ahead, I was ahead going into Turn 2, then all of a sudden he was on top of me."

When asked if Verstappen could have backed out, Hamilton said: "Absolutely. Exactly the same scenario that happened in Turn Four, where I went around the outside, I was in exactly the same position, but I gave way.

"And that's racing. He just didn't want to give way today, he knew when he was going into Turn 2 what was going to happen, he knew he was going over the kerb but still did it. We'll speak to the stewards and we'll see."

It had been a slow pit for Mercedes by their own standards, clocking 4.2seconds, allowing Verstappen the chance to try and overtake Hamilton on lap 26.

Verstappen was clearly confident, having just produced the fastest lap of the race at the time, but that had came after his nightmare 11second pit stop which clearly urged him to try and gain ground.

The pair had already come close to colliding earlier in the race after the start, with both drivers pulling out on that occasion as Verstappen kept ahead of his rival.

This time the Dutchman had no such intentions, and while Hamilton backed off slightly, he could not avoid making contact.

Hamilton was fortunate to emerge from the incident unscathed, with the halo on his car helping him avoid serious injury as Verstappen's vehicle came close to hitting his head.

The safety car was quickly deployed and eventually left the track at lap 30 as the race was able to resume.

It left a big opportunity for the rest of the pack, with McLaren's Daniel Ricciardo leading the race having taken the lead from Verstappen early on.

His team-mate Lando Norris was bumped up to second as a result of the two championship leaders' exits, while Red Bull's Sergio Perez followed behind in third.

The rest of the race was like a procession as McLaren landed a one-two with Ricciardo taking first ahead of Norris, yet a five-second penalty to Perez saw him slip to fifth behind Mercedes' Valtteri Bottas - who claimed the final spot on the podium - and Ferrari's Charles Leclerc in fourth.