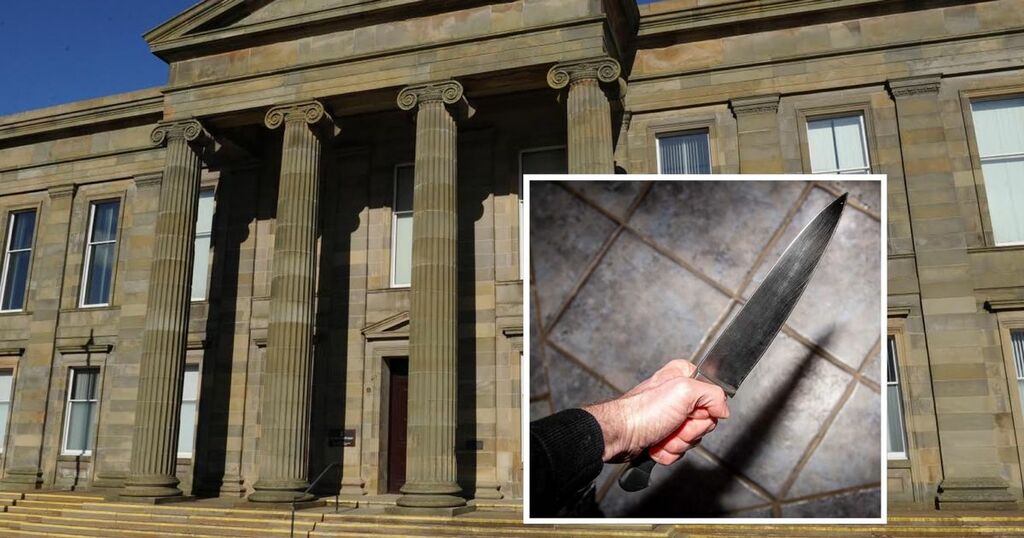 A man who threatened to stab fellow revellers at a party in Blantyre has been jailed for nearly two years.

Craig Chalmers, a prisoner, admitted brandishing a blade and making threats in Kinnoul Place on November 23, 2019.

He also admitted striking a man on the head with a bottle, though no injury was caused.

An allegation that Chalmers, 24, shoved a woman against a wall and held the knife against her neck was dropped.

Robert McKain, 25, of Hamilton Road, Cambuslang, had his not guilty plea accepted to a charge of making threats and brandishing a knuckleduster.

Kevin Jarvis, prosecuting, said those involved had been drinking and at one point Chalmers was showing off a lock knife.

Later he became abusive when he and McKain were asked to leave.

Mr Jarvis told Hamilton Sheriff Court : "Chalmers presented the knife and made remarks including 'I'm going to plug you all'.

"As the accused was leaving, he struck [the man] with a bottle."

Defence agent Eddie Robertson described his client as "intelligent, but no stranger to the court".

The solicitor added: "Drink and drugs have played a major part in his criminality."

Sheriff Colin Dunipace jailed Chalmers for 23 months, but backdated the sentence as he has been in custody since November last year.

Previously, Chalmers, who is from East Kilbride, was locked up twice for biting the same man on different occasions.

First, the victim lost the tip of his nose then, after being freed from prison, Chalmers assaulted him again, biting the man's finger.

He also served a nine-month stretch for trying to bite a police officer's arm.