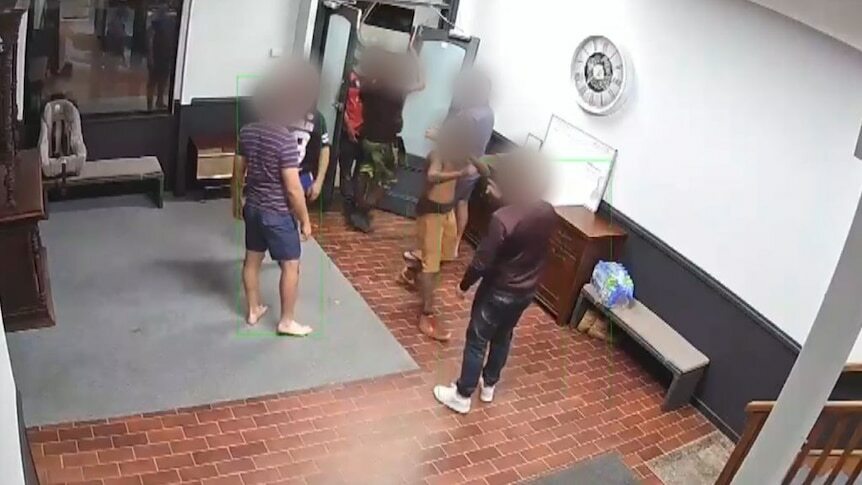 The owner of a heritage-listed hotel in the Goldfields which was broken into last week, prompting a guest to hide in a wardrobe, has been left with a damage bill of over $30,000.

Mal Rogerson said a large group of people were damaging cars outside the historic Grand Hotel Kalgoorlie last Thursday night before smashing the front door off its hinges and forcing their way in.

He said a smaller group then ran through the Hannan Street building and shouted at guests around 9:30pm.

He is still assessing the full extent of the damage with his insurance company.

Built in 1895, The Grand Hotel is the oldest permanent hotel on Hannan Street.

Two years after it opened, the first telephone service in the Goldfields was installed.

Mr Rogerson said all of his tenants have since moved out of the hotel because they did not feel safe following the incident.

Jo and Tim Searson were visiting from Perth and witnessed the altercation on their first night in Kalgoorlie.

Mrs Searson was waiting for her husband in a communal area of the hotel when she heard the front door being smashed.

"It was just the noise that frightened me. I was trying to turn the lights off in the room that I was in," she said.

"In the end I couldn't find the light so I got into the cupboard."

Mrs Searson said she got into one of the antique wardrobes in the room and held the door closed in fear.

"I couldn't see anything, but I came out of the wardrobe thinking 'where's Tim? This is all so noisy, what's he doing?'" she said.

Mr Searson said he was in their room when he heard the door being smashed in.

"There was one guy who wasn't wearing a shirt … he was very irrational and was the one who kicked down the door," he said.

"He was the first one to come in and ran upstairs looking for Mal."

Mr Rogerson said he was thankful for a group of guests who tried to control the situation before police arrived.

"There were some guys that were staying here that luckily got out of bed and rushed down and stood at the front door," he said.

"But because [the intruders] were charging through the front door and both doors were already smashed down, [the guests] let them through."

Mr Rogerson and the two guests said it took police about half an hour to arrive at the scene.

"I started ringing at 5:30pm and I'd already rang them five times in regards to disturbances on the street before the event even occurred," he said.

He said it was appropriate for the officers to try and calm the situation down rather than make arrests on the night.

"It is an active investigation and we are reviewing the evidence and trying to identify potential offenders."

Anyone with information regarding the incident is asked to contact Crime Stoppers.