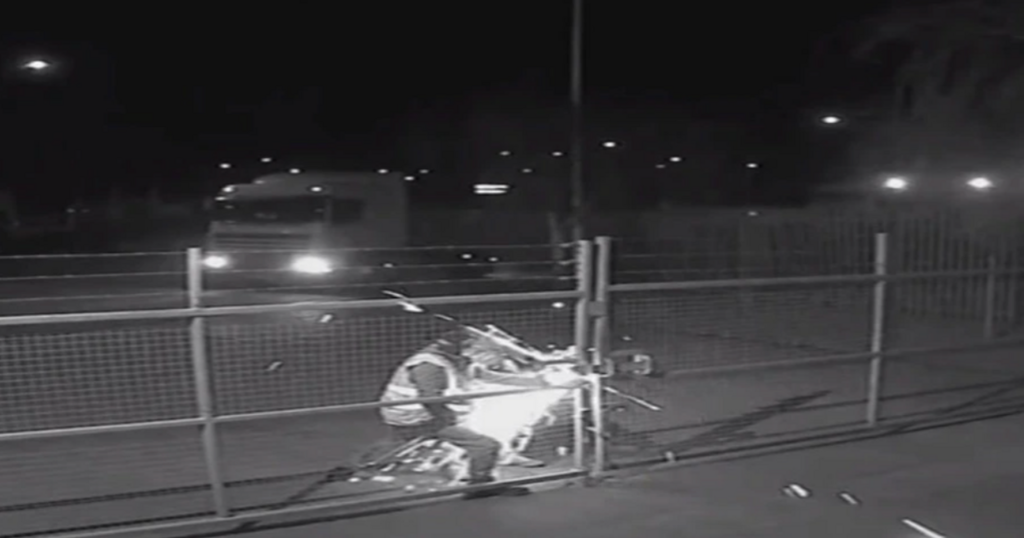 This is the moment crooks made off with a haul of mouthwash and chewing gum following a brazen raid on a security compound.

The cons scooped £25,000 worth of the items after smashing their way into the site.

They cut the locks on the main gate with an angle grinder - then used a lorry to smash through a security barrier.

And once inside the storage depot they hooked a container onto the truck before making their escape.

The container was packed with 48 pallets, housing chewing gum and 5,000 bottles of mouthwash, worth around £25,000.

The bungling thieves struggled to break through the second security barrier, which broke the windscreen of their truck.

But they managed to escape despite the damage to the vehicle and made off with the haul.

The entire episode was captured by CCTV cameras and the footage is now being shared in a bid to track down the crooks responsible.

BBC Crimewatch Live broadcast the footage of the April 16, 2021 raid, in Stallingborough, Lincolnshire.

Detective Constable Wayne Martin, of Humberside Police, said: "At around 1.15am on Friday April 16, 2021 CCTV footage shows a man using an angle grinder to gain access to the main front locked gates of a secure compound on Trondheim Way in Stallingborough near Grimsby.

"Two men can be seen on CCTV cutting the locks. One of the men wearing a high viz waist coat appears to not be able to use his right arm.

"On entry a white tractor unit on false plates is seen to ram the inner barriers and drive into the compound.

"The unit has been hooked up to a trailer with a container loaded with 48 pallets of mouthwash and gum valued at over £25,000.

"I would urge anyone who has information to contact them and tell Crimestoppers what they know.

"The tractor unit and container has then been driven out of the compound.

"The trailer unit without the container was located on Tuesday 29 June in South Yorkshire on the Yarra Industrial estate in Sheffield.

"I would appeal for anyone with information about this incident to contact us on our non-emergency number 101 quoting reference 16/41004/21."

Information can also be provided to Crimestoppers anonymously.