The lights dimmed, a hush came over the auditorium and the orchestra struck up the first notes of the overture. This ritual has taken place thousands of times at Kyiv’s grand opera house over the past century, but the performance on Saturday afternoon was something out of the ordinary.

In a city that over the past three months became used to wailing air-raid sirens and the thuds of artillery from the suburbs, the audience was instead treated to the frothy melodies of Rossini’s The Barber of Seville.

It marked the first performance since the missiles and shells of Vladimir Putin’s invasion rudely interrupted the opera season – and everything else in Ukraine – in the early hours of 24 February.

Now, less than three months later and with fierce battles still raging in the eastern part of the country, the opera is back, although with some changes. Performances will only take place on weekend afternoons, a maximum of 300 tickets are sold, and the audience has to be ready to move quickly to the basement cloakrooms if air-raid sirens sound during a performance.

Saturday’s audience was a mix of couples enjoying their first opportunity for weeks to wear their most elegant outfits, and soldiers in military fatigues taking a break from their army service for some high culture.

Only the stalls were full, with the four tiers of gilded balconies off-limits to ensure an evacuation could take place more quickly if needed.

“I can’t say opera is my usual entertainment, but it is an incredible feeling to hear this music and to be in a different world for a little while, before coming back to our reality,” said Volodymyr, a soldier who only wanted to give his first name.

Many of the opera troupe are still abroad, and some in the orchestra are fighting on the frontline or serving in the territorial defence forces.

Oleksii Potiomkin, the principal dancer of the ballet, has joined up and is serving in the army, posting daily updates on Instagram.

But enough artists and technical staff are back at work for the company to put on full-scale opera stagings.

Soprano Olha Fomichova, who sang the lead role of Rosina on Saturday, struggled to hold back tears as she spoke of her emotions before going on stage.

“I had the feeling this morning that I was coming to sing a premiere, even though I have been singing this role for years. I feel like I’m coming out on to this stage, which I know so well, for the first time,” she said.

Fomichova mostly stayed in Kyiv during the invasion but sent her son to safety in Germany. She saw him recently when she travelled there to take part in a charity gala to help Ukraine, and both the family reunion and the concert were emotional, she said.

“When you take a Ukrainian flag on to the stage for the curtain call and you are met with a 10-minute standing ovation, I don’t have words to describe the feeling,” she said.

Over the past three months, the soloists have kept in touch in a chat group on Viber, swapping stories about how the war was going for them, said Natalia Nykolaishyn, a soprano who has been at the theatre for 20 years.

“We were all very close before, but now we feel like family,” she said. On Sunday, Nykolaishyn will sing the lead role in the opera Natalka Poltavka by the Ukrainian composer Mykola Lysenko.

“We wanted to open with symbolic performances: first a European classic and then a Ukrainian classic,” said culture minister Oleksandr Tkachenko, who attended Saturday’s performance.

Kyiv’s opera house has seen a lot over the years, on and off the stage. Opened in 1901 after a fire destroyed the previous building, a decade later it was the scene of a dramatic assassination.

Prime minister Pyotr Stolypin, attending a Rimsky-Korsakov opera with Tsar Nicholas II, was shot dead during the interval while standing in the front row of the stalls.

The pause in performances during the Russian invasion is only the third lengthy gap in activity over the past century, said the theatre’s archivist Larisa Tarasenko.

The first was between the end of the Nazi occupation and the return of the evacuated Soviet troupe. The second was due to Covid. Otherwise, performances continued even as regimes, empires and ideological slants changed.

Now, with the Russian invasion, the theatre plans to remove all of its Russian repertoire, at least for the time being.

Tkachenko said the culture ministry is actively lobbying opera houses abroad to remove Russian works from their repertoires, an issue which has stirred a debate in many countries over whether Russia’s cultural heritage should be separate from the actions of Putin’s government.

“We’re trying to argue that in a time of war, it is a symbolic move, and we should find ways to celebrate French, Italian and certainly Ukrainian composers,” said Tkachenko.

Nykolaishyn said she grew up on the Russian classics, and singing Tatyana in Tchaikovsky’s Eugene Onegin was one of her first and favourite soloist roles.

“But right now, this is not the time for anything Russian. Maybe one day it will be possible again, I don’t know,” she said. 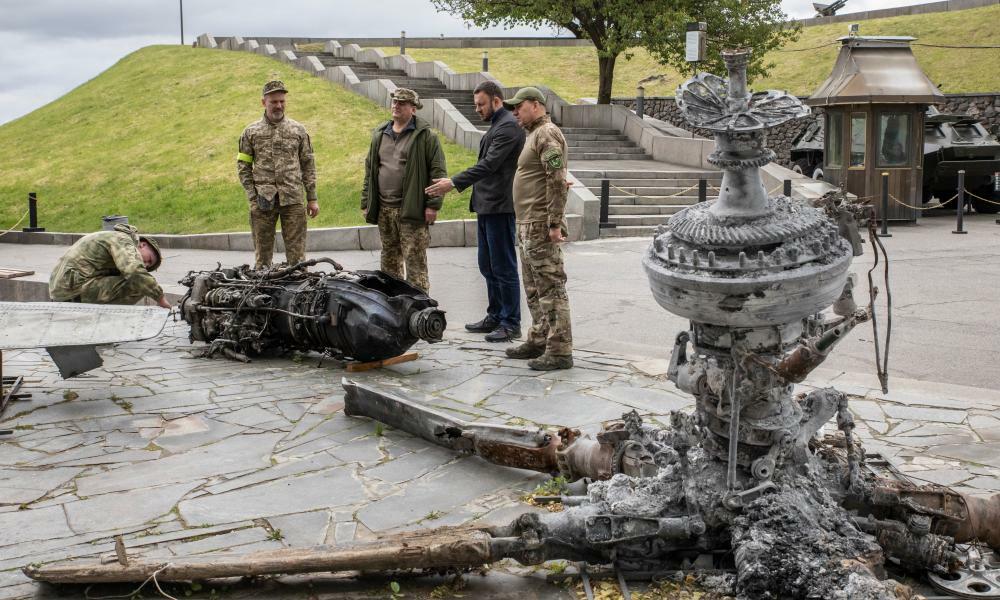 The Guardian - UK
One subscription that gives you access to news from hundreds of sites
Devil’s advocate? Russian soldier’s Ukrainian lawyer defends role on eve of verdict

Joe Biden among those banned after signing $40bn aid package for Ukraine; Finnish president says he held ‘open and direct’…