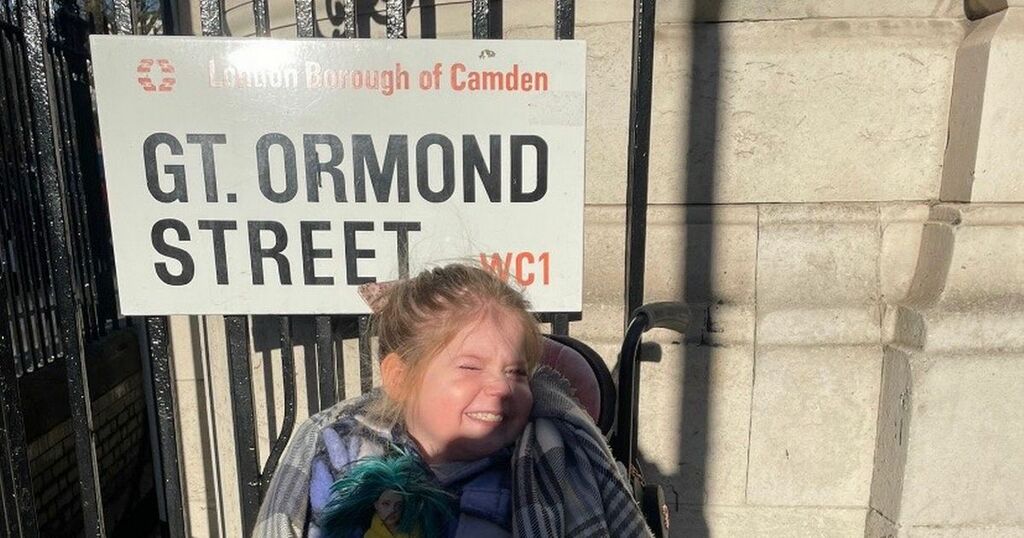 A 7-year-old girl from Newtownabbey is preparing for major surgery this year at Great Ormond Street Hospital, London.

Paula-Jayne Tate was told when she was 20 weeks pregnant that her daughter Kaidence had the most severe type of spina bifida (myelomeningocele) and hydrocephalus - a build-up of fluid in the brain which can put pressure on it.

The child 's condition causes many complications - with Kaidence having two VP shunts fitted which are small plastic tubes that help drain extra cerebrospinal fluid from the brain.

Her mum said she is also the first child in Northern Ireland to have a telemetric brain device fitted to record brain pressures.

Kaidence is now preparing to have spinal rods, tethered cord surgery along with a neurosurgery brain procedure in 2022.

Mum Paula-Jayne told Be : "She has only turned seven and already she has had 26 surgeries from the day she was born.

"They actually planned my section around our neurosurgeon. Kaidence was an hour old and went for eight hour back surgery. I didn't even get to see Kaidence when she was born. We had a team in place and that was her away, straight away.

"It's scary and doesn't get any easier with time. It's harder to be honest because of her wee personality and she can tell you now how she feels about it, so that's the hard part for us."

Despite everything she is going through, her mum said she is "a real wee character".

"She is brilliant. Very theatrical, very funny. She loves doing practical jokes and telling jokes and she is just dead sassy.

"Everyone that meets her just loves her, she would speak anybody, she's really friendly and she just leaves quite an impression wherever she goes. She has got her own wee style already.

Paula-Jayne added how life-changing the surgery at Great Ormond Street Hospital (GOSH) is going to be for her daughter.

She said: "We have known since Kaidence was born that she was going to be getting this spinal surgery. It is very complex and the team here in NI couldn't facilitate the level of care she needs.

"We were referred a couple of years ago to GOSH and we met with the surgeon last year and he said we had to go to London. I sort of fought it a bit... we just wanted to be here with our family and stuff as it is major surgery, but we went over last week.

"It has turned out a bit more complex than we thought. She [also] has to have a brain procedure done. Kaidence has a tethered spinal cord too so that makes it more complicated.

"This surgery you would get around teenage years but Kaidence, her condition is really going against her and is progressing a lot faster than what we thought. It is affecting her lungs and other organs so she would be quite poorly and in and out hospital.

The Newtownabbey mum continued: "This year already she has had sepsis, pneumonia, quite serious infections. Last year she had seven brain surgeries in a row so she doesn't really ever get that long term break.

"This is something that is going to prolong her life and hopefully make her more comfortable and give her that wee bit more freedom.

"It is the biggest thing she will ever go through in her wee life. We are back again next week for a couple of days for more MRIs and CT scans and to put a plan in place.

Although it's been an extremely tough seven years, Paula Jayne says Kaidence is "the bravest person she knows".

"Especially me as her mum, Kaidence had seven surgeries in a row and we were in hospital for nearly six months on and off.

"We came out and we came into lockdown. It was a different world and to be honest, I went into shock. It was just such a hard time, we were shielding and then Kaidence took poorly.

"Kaidence has been the positive one out of all of us, she is the brave one. I know that I've been falling apart over it as I am just so worried about her.

"Nothing seems to every annoy her, she is just so used to it," she said.

"It's looking like she might now get a private tour of Buckingham Palace whenever we go back over [to London].

"We really try and make [the visits] fun for her, to make her excited to go the next time as when we go back, she is being admitted," Paula-Jayne added.