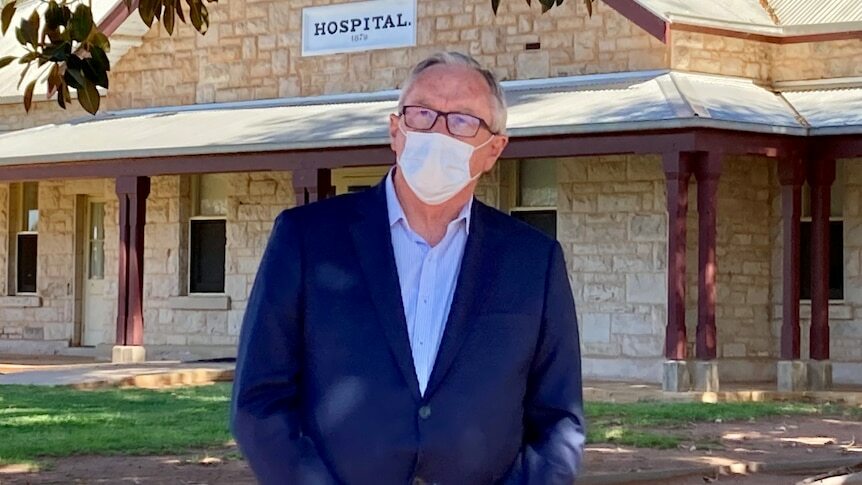 NSW Health Minister Brad Hazzard has admitted the state government could have responded better to community concerns about the lack of housing in Wilcannia ahead of its COVID-19 outbreak.

Overcrowded housing in the remote, predominantly Aboriginal far west town has been recognised for years as a public health issue.

Aboriginal health service Maari Ma warned the federal government 18 months ago that "urgent and drastic action" was needed to prepare Wilcannia in case of an outbreak there.

Wilcannia has had 102 cases of COVID-19 since last month — more than 13 per cent of the town's population.

A fleet of 30 motor homes arrived in Wilcannia over the weekend to allow COVID-19 positive residents to isolate effectively.

Mr Hazzard travelled to western and far west New South Wales this week to see the work being done to combat the COVID-19 outbreak in regional parts of the state.

"You tend to learn far more when you're out on the ground and talking to people at the front line," he said.

The first positive cases of people in Wilcannia were instructed by the Far West Local Health District (FWLHD) to isolate in their own homes, often overcrowded with up to fourteen people living under one roof.

Mr Hazzard acknowledged the growing outbreak in Wilcannia was partly because positive cases from large families were not able to isolate safely from other members of their household.

"But clearly here the NSW government has stepped in to try and support the federal government in its endeavours to look after Aboriginal communities, and we're doing what we can."

Community leader Brendon Adams, a Ku-Ku Yalangi/Woppaburra man from far north Queensland and based in Wilcannia for more than two decades, said the government should have paid more attention to the town when the pandemic first began.

"We wanted to be heard and, of course, to have our local solutions acted on."

Despite the lack of preparation, Mr Adams said the coordinated support from local community groups, health and emergency staff, and the government had been commendable.

"I'm just glad something's happening now, and people might say it's a bit late, but for me its better late than never," he said.

He said the Wilcannia community was hoping Mr Hazzard's visit will mean the town's serious health and housing issues were treated with more urgency.

"He [Mr Hazzard] needs to be here to listen to all of it. Our social housing issue was one of the largest but it's not just about more housing, it's about health," he said.

"What are the strategies and preventions so that we don't get hit with a second wave?"

Broken Hill Mayor Darriea Turley, who is isolating after a COVID test as a result of a visit to an exposure site on Saturday, urged Mr Hazzard to commit to more support for the region.

She said contact tracers were struggling to keep up, including tracking down those at risk from her own exposure at a Reject Shop.

She said she hoped Mr Hazzard was using the visit to announce new funding for the local health service, but that he could have done it by video call.

"Please bring some relief for these staff. And please make sure you review your essential travel, and you review regional travel."