Boy with 'pins and needles' given devastating news by doctors 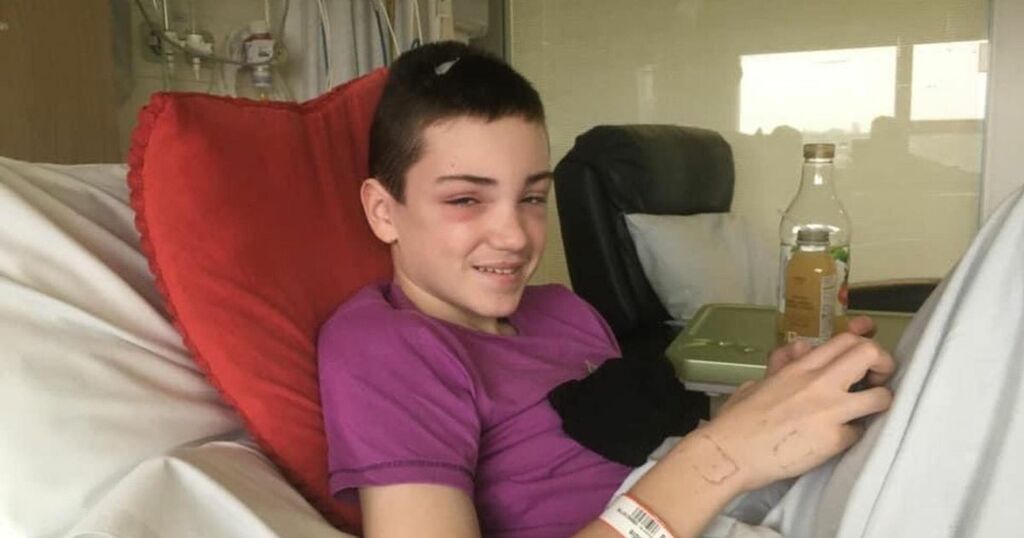 A boy who started waking up with "pins and needles" was told he needed brain surgery.

Freddie Parsons, now 16, began waking up with pins and needles when he was just seven.

It was only when his family noticed he was having seizures in his sleep they realised something was wrong.

Freddie's parents, Vikki, 45, and Martin, 56, were told they needed to record the seizure for the doctors near their home in Giggleswick, North Yorkshire to see.

That's when Freddie's mum and dad managed to record him having a seizure on a night when his older sister Abi had been sharing a bed with him.

Recalling Freddie's first diagnosis nine years ago, Vikki told the ECHO : "We had been trying to get help at our local hospital because he had been having seizures in his sleep at night, and we couldn't get any answers.

"Luckily I we went to go see one of our local GPs who specialises in epilepsy and he had lectured with Dr Appleton who was at Alder Hey.

"He said if we were willing to travel we could go get a second opinion at Alder Hey. We said yes and we never looked back.

"They decided it wasn't just night time epilepsy and gave him an MRI scan. That's when they found that there was a tumour. That was in March 2012.

"He had a biopsy in July, came home for a couple of days and ended up back in for an emergency stay because he was constantly fitting. They chased up the biopsy results and it turned out to be a benign tumour.

"They decided at that point that they were going to operate to try and remove most of it but there was still a bit near his brain stem that was too dangerous to get to.

"It was very near his motor cortex so they were more concerned about whether it would affect his mobility so that was a big thing to deal with because he was an extremely active and sporty seven-year-old.

"It went very well when he was seven, he bounced back straight away and was back at school after three weeks in a disability buggy.

"We thought that was it because they thought it didn't have a blood supply so it wouldn't grow and they signed us off after a few years.

"Then when he was 14 he started getting tingling feelings down his right hand side and we got referred back to Alder Hey. That's when they scanned him again and found that the tumour had decided to grow back which is extremely rare.

"That was huge. We really thought we were home and dry. He was back in pretty quickly. A couple weeks after they diagnosed him they took him back in and he had a nine hour surgery to remove as much as they could.

"We continue now to have yearly MRI scans just to make sure it doesn't grow back but we do have that possibility of that being a reoccurring thing which is quite difficult for him to deal with. It's been quite challenging at times but he always amazes us."

Vikki also recalled when Abi recorded the seizure for the doctors.

The 45-year-old mum-of-three told the ECHO: "It wasn't the first seizure he had because he was waking up in the night and telling me he felt like he had pins and needles and his side was numb.

"I just thought he had lay in a funny position, like when you wake up and you have a dead arm because you'd lay on it too long.

"He had been sharing a room with his brother at the time and we twigged on that he was shaking sometimes [in his sleep].

"We were asked to video it by the local hospital and that was really hard because he'd wake you up at the end of his seizure.

"We went away in a caravan that our friends lent us and Abi managed to alert us in the night as she was sharing the bed with him and we did get some footage that night.

"It was scary for her as she was sharing the bed with him at that point as well. It wasn't the first seizure he had but it was the first we managed to capture on camera to show a doctor."

Vikki, also mum to Abi, 21, and Harry, 19, has been left feeling proud of her son for not just soldiering through two brain surgeries, but also raising thousands of pounds for Alder Hey.

Freddie has recently raised £4,000 by riding his bike everyday for a month.

The nursery nurse told the ECHO: "It's definitely been challenging. He was struggling with the work his school were setting him for PE. They were giving him plank challenges and all sorts of things that he wasn't really capable of.

"He messaged his PE teacher and said he was going out on his bike most days. So even though he couldn't do the work he was setting, he was keeping fit.

"He was very supportive. Then Freddie turned round and said 'I could do [ride my bike] everyday. If I did it everyday could I get sponsored?' He said he could do 250 miles in a month, bare in mind it's very hilly round us as we're right in the heart of the Yorkshire Dales.

"So he literally went out everyday no matter the weather. It gave him something really positive to focus on as well. We ended up setting up a JustGiving page because of lockdown and it went a bit mad really. It was really good for him."

Alder Hey recently posted on Facebook: "Meet our fabulous Freddie. 16 year old Freddie raised over £4000 for Alder Hey last year by biking 250 miles in the Yorkshire dales to ‘give back to the ward he was on.’ Freddie said."