An 11-year-old boy who decided to start living in a tent to raise funds for cancer has reached the 500-day milestone - and says he "will not stop".

Max Woosey, 11, began camping in his garden on March 27, 2020, in memory of his friend and neighbour, Rick Abbott, who sadly died from cancer in February 2019.

Max, from Braunton, Devon, wanted to raise money for North Devon Hospice, which had supported Rick, as the facility was falling short of financial donations due to lockdown.

“It feels amazing to reach 500 nights,” Max told the Guardian as he reac hed the 500-d ay milestone.

“It doesn’t seem like it’s been that long because so many cool things have happened since I started camping.

"I never ever thought that it would last this long, but I absolutely love it.”

Max says he has no intention of going back to the warmth and comfort of his room as sleeping in a tent has now become his new normal.

"I don’t have any intention of stopping just now," he said.

"I love being outdoors and being closer to nature. If it stops being fun, I’ll come in. But I can’t imagine that.”

Proud dad Mark, however, admitted his son may see some advantages in camping as his parents can't check on him as much as they would if he were indoors with them.

His mum Rachael hailed the sensational 500-day achievement saying "none of us can really believe what happened".

She went on to say that she tells her son that he can stop as he has already done something "special" - but he keeps objecting.

The Mirror previously reported how Max had encouraged kids to join him for a virtual camp in March this year to mark his 365 days in the tent.

The 'Max's Big Camp Out' event was aimed at raising awareness about child mental health at a time when it was bound to be most strained due to lockdown.

Speaking at the time of the event, which raised half a million pounds for charities, his mum Rachael said: "I have to stop and pinch myself to take in just how big this has become.

"Max started out with the intention of raising a few pounds for our local Hospice.

"But to mark a year in his tent he decided he’d like to raise awareness of children’s mental health during lockdown.

"He knows what it’s like to be isolated from friends, not to be able to play team sports and that sort of thing, so he’s doing this for all those children who have found lockdown, indeed the whole Covid crisis, so tough."

Max's incredible efforts saw the backing of his own two inspirational heroes Bear Grylls and Jonny Wilkinson, who have sent him video messages of encouragement.

"I couldn’t believe it," Max said.

"I watch all Bear Grylls stuff on tv and I love rugby.

"I‘ve got a few books about Jonny Wilkinson and his autobiography in my tent, which I read when I’m not reading the Beano.

"It was epic that they both supported me, saying carry on kid, you can do it!"

Anyone who wishes to donate to Max's cause can still do so here. 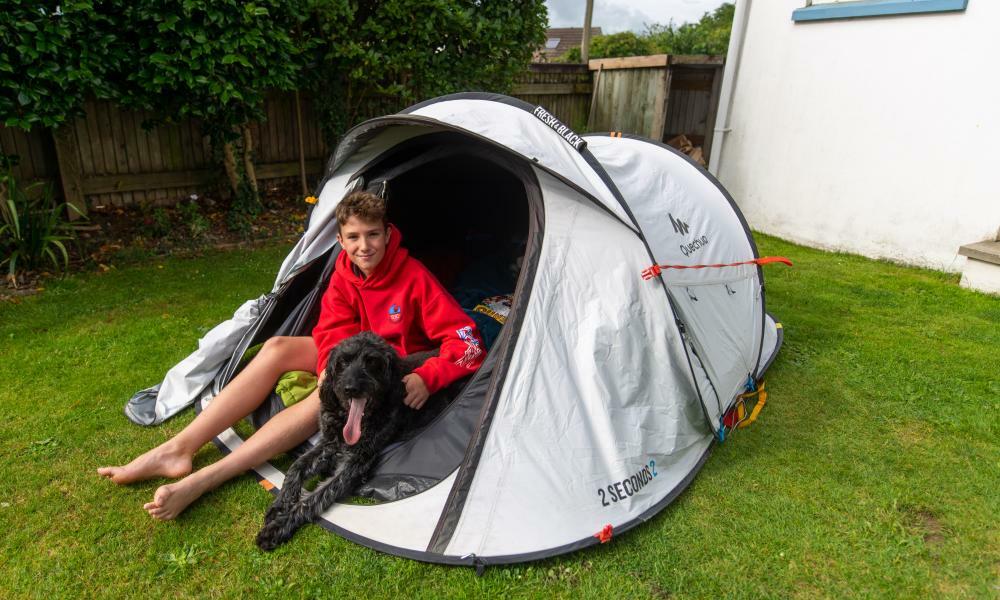 Statement of intent: boy raises £640k with 500-night camp out
Max Woosey, 11, hoped to secure £100 for a Devon hospice but his charity pitch became a marathon

The Guardian - UK
One subscription that gives you access to news from hundreds of sites
Tuesday briefing: ‘Worst of climate change is still avoidable’

Derek Stewart is taking on the challenge to add to the total of £75,000 which he has already raised for…

Andrew Feeney, 37, will take on the 516-mile scenic route around the northern coast of the country by foot, with…