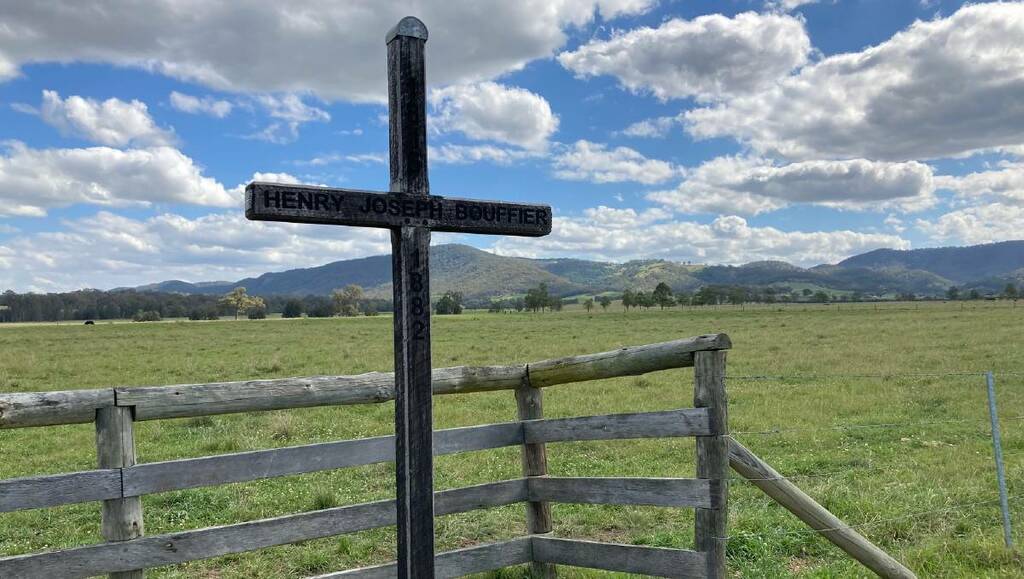 WE all like a good glass of chilled Hunter Valley wine this hot summer, don't we?

Or maybe a robust red? Either way, the Hunter is renowned for its special, award-winning, boutique wines.

It started probably back in the 1870s when our noble grapes started to attract real attention even at wine shows overseas.

But then, about a century later, the bottom seemed to drop out of the market for a while. Post-World War II, before an influx of migrants radically changed our attitudes to food and wine, beer was king and we were a meat-and-three veg type of people. Nothing exotic.

Back in those dark days, wine from our premier wine-growing region at Pokolbin, was, well, often generally derided as "plonk".

Maybe it was something to do with dingy city wine bars being seen as a cheap alternative to pubs to get drunk quickly.

My, how tastes have changed today for the better. All of which brings me today to the now almost forgotten Bouffier Brothers. Never heard of them? These Lower Hunter wine pioneers once won prizes at global wine exhibitions such as in Paris, London, Amsterdam, Chicago and Calcutta.

Such was their fame that by 1889, the wine dynasty of the Bouffier Brothers had accumulated more than 200 medals and about 50 silver cups. They keenly pursued wine shows because of the favourable publicity they generated both in NSW and overseas.

According to extensive family history research recently published by Vivianne Byrnes, of Sydney, the Bouffier Bros seemed to reach their peak around 1901-1903.

Their wine business was hailed by some newspapers then as being "the largest in the Southern Hemisphere". But their intense business drive gradually faded due to family deaths and other factors.

For example, the late legendary vigneron Audrey Wilkinson once said that when coal was discovered and mined at Cessnock (around 1900) many growers "turned their backs on the risk of winegrowing and went to work for better wages in town".

All of which brings us to the enterprising family patriarch Heinrich (or Henry) Joseph Bouffier (1815-1882), who these days may well be the region's most "unknown" wine pioneer.

Today, he's remembered not because of his wine exploits but usually instead because of a huge cross originally planted by "the Pokolbin Road" (now De Beyers Road Pokolbin, west of Cessnock Airport) 140 years ago.

That's because it's where he died of a skull fracture after falling from his horse, which either stumbled or threw him on McDonald's property in November 1882. He was 67. To honour the pioneer's memory, a 10ft tall wooden cross was set up on site of the tragedy where it soon became a landmark.

Henry Bouffier is often regarded as being the first vigneron in nearby Cessnock after he established his vineyard in 1866, near the present Cessnock Showground, on the northern side of Wollombi Road, stretching from Mount View Road to Alexander Street.

Henry Bouffier is often regarded as the first vigneron in nearby Cessnock.

He also erected the first brandy still in the district. Henry fiercely promoted the Hunter wine industry. His name appears 47 times in the era's newspapers.

Nulkaba resident Brian Laut told Weekender he believed the original, imposing 1882 timber cross stood for 85 years. It probably burned down in 1967 in a bushfire.

"The exact spot where Henry Bouffier fell from his horse was debated, so two vignerons each placed a stone where they thought the accident occurred, then split the difference," Laut said.

But the story gets only more interesting. There's actually also a second Henry Bouffier monument, also a cross, but a very ornate white marble one, over his grave in Cessnock Cemetery.

As well, the famous Antarctica photographer Frank Hurley was the grandson of Henry Bouffier. Hurley travelled with explorer Mawson in 1911 then, along with others, was feared dead but then survived the ill-fated 1914-1916 Shackleton expedition.

And did you know there were once two Pokolbins? The name of Pokolbin village (today's Nulkaba and meaning 'place of ironstone') was officially changed on July 8, 1927. It was because of too much confusion with mail being delivered to another village, also called Pokolbin, four miles to the west.

And to follow the journey we're indebted to family history researcher Vivianne Byrnes. She wrote recently the Bouffier family history was really divided into three parts over 40 years. There's Henry, then his younger son Frank James Bouffier and Frank's wife Catherine Teresa Bouffier who both carried on the family wine vision.

Heinrich (Henry) and his wife came to NSW along with other German agricultural workers on board the ship 'Parland' in 1849, finally arriving at the Hunter River port of Morpeth by steamboat.

The first years in the new country were very challenging as the new settlers battled drought, flood and frost unfamiliar with the terrain, new soil types and the harsh climate. They experimented with new wine varieties and techniques, moving away from their own traditional European methods to create their own Australian style, she wrote.

Henry Bouffier persevered and was envied for his Hunter Valley vineyard, encouraging other vignerons and was quite outspoken about community issues, including campaigning to change the NSW liquor laws with the view of popularising wine to the middle class.

Byrnes writes that between 1877-1882 Henry and sons Martin and Frank worked hard to establish wine stores in Newcastle, Sydney and Maitland, developing interstate markets and improving the quality and variety of grapes produced.

The pinnacle of Henry Bouffier's wine career was beating the French at their own game by winning a silver medal for a red hermitage at the Bordeaux Wine Show in October 1882.

Byrnes writes that Bordeaux was the hub of the European wine industry. It was a courageous move to send a wine consignment from the colonies to this important international wine competition. More extraordinary was to win over there.

Only a month later, however, Henry was dead, killed in a fall from a horse.

Byrnes writes that her great great-grandfather, Henry, played an important part in developing both Pokolbin and Cessnock wine industries, being proactive, debating issues and being busy on committees.

"His experiments helped to advance the infant Australian wine industry far beyond expectations," she writes.