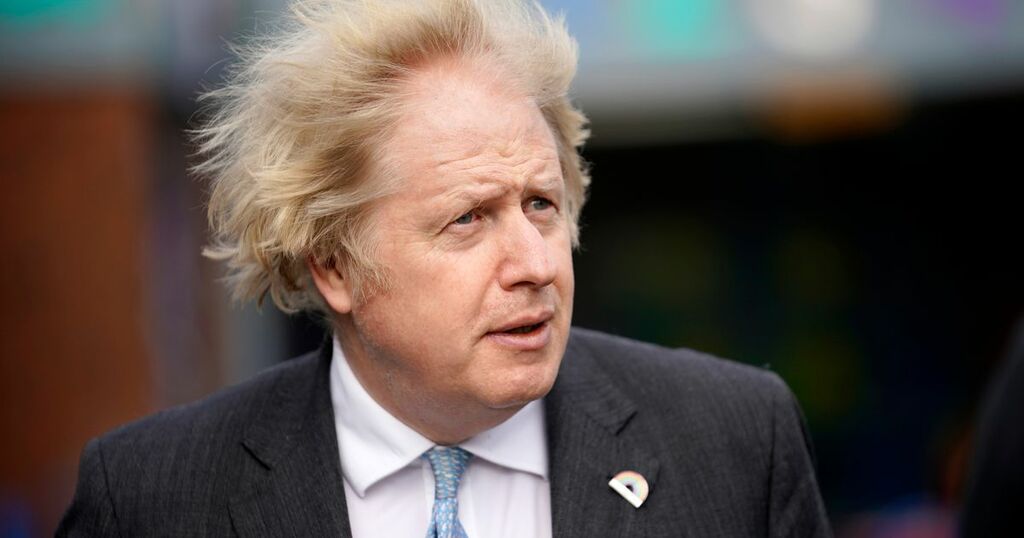 Boris Johnson enters the new year with a question mark hanging over the future of his leadership.

In a turbulent year for the prime minister, the coronavirus pandemic dominated government decision making for the second year in a row, causing deep divisions within the Conservative Party.

Just before the Christmas recess, Mr Johnson, who got married and welcomed a baby girl with Carrie Johnson in 2021, saw the largest revolt of his own MPs to date, relying on Sir Keir Starmer's Labour to get his Covid proposals through Parliament.

Nearly 100 Tory members voted against the prime minister's 'Plan B' restrictions to curb the spread of Omicron, which included making vaccine passports mandatory in larger venues, voicing concerns about the impact such measures have on the economy and civil liberties.

But, there is more to the prime minister's precarious position than his pandemic policies.

Downing Street representatives had to deflect accusations of sleaze and scandal as headlines questioning the prime minister's integrity and judgement dominated the news in 2021.

Mr Johnson's efforts to rewrite the Commons standards rules after former cabinet minister Owen Paterson was found to have breached the ban on paid lobbying led to the first serious questioning of his position at the beginning of November.

Labour and the SNP both refused to be involved in the proposed cross-party committee examining the current system, backing the the prime minister into a corner and forcing him to u-turn on his decision.

As a result, Mr Paterson stepped down as MP and the Conservatives were dealt another blow during a tense by-election in his former constituency of North Shropshire.

Losing the once safe seat to the Liberal Democrats, Mr Johnson said he took “personal responsibility” for what he described as a “very disappointing” by-election result, before sidestepping questions about whether he would resign in the interests of his party.

Some have predicted the humiliating defeat is a sign of what is to come for the Conservatives in 2022.

Labour suffered significant losses in last year's local elections, but the developing trouble in Mr Johnson's camp may result in the tables turning.

The local elections this coming May, covering 146 English councils, 32 in Scotland and 22 in Wales, will provide the first real insights on where the public stand on the government’s performance.

Mr Johnson will be doing everything he can to boost his rating ahead of the crunch votes after slipping in the opinion polls in recent weeks.

Another poll, published on January 2, suggests Sir Keir may have already won back voters’ hearts in the Red Wall constituencies lost to the Tories during the last general election.

The Deltapoll survey, conducted in 57 constituencies the Tories gained in 2019, found that 38 per cent of voters agreed Sir Keir would make the best PM.

The poll, for the Mail on Sunday, also put Labour in the lead when it came to the voting intention in those seats - 49 per cent said they would vote for Labour, while 33 per cent said their vote would go to the Tories.

The picture was even worse for Mr Johnson when voters in the 57 seats were quizzed on the pandemic. Only 32 per cent thought he was doing well on Covid, while 62 per cent disagreed.

The polls come in the wake of a string of allegations involving members of the government breaking their own rules by holding Christmas parties while England was under tiered coronavirus restrictions at the end of 2020.

Allegra Stratton, a former spokeswoman for the PM, was the first casualty of the saga after a leaked video showed her and other aides joking about a “fictional” party in No 10, in footage shot only four days after a Christmas drinks party on December 18 reportedly happened.

After days of denying any illegal events were held, the government announced that an investigation into any lockdown-breaking parties that took place across Whitehall would be held.

However, Cabinet secretary Simon Case recused himself from leading the investigation just over a week later after it emerged he had attended one of the events under scrutiny.

The Deltapoll survey showed that just 16 per cent of respondents believed Mr Johnson had obeyed the rules, compared to 72 per cent who did not.

A majority (65 per cent) said he should resign if he was found to have broken the law over Covid restrictions.

Former health secretary Matt Hancock was forced to do just that in June last year when he was caught on camera kissing his aide Gina Coladangelo in breach of social distancing regulations.

He stepped down from the Cabinet just a day after the prime minister said he had accepted Mr Hancock's apology and 'considered the matter closed'.

Mr Hancock was already under close watch after the prime minister's former adviser Dominic Cummings ripped into him during evidence to the health and social care committee just weeks earlier.

Mr Hancock was accused of being “disastrously incompetent” by the former No 10 aide, who himself had been embroiled in a rule-breaching scandal after travelling to Durham during the coronavirus lockdown.

Mr Cummings also claimed the former health secretary lied to the PM about hospital patients getting tested before being discharged into care homes in the early stages of the pandemic.

With a new health secretary in place - former chancellor Sajid Javid - all eyes were on whether or not the prime minister's planned 'Freedom Day' would go ahead allowing the lifting of all remaining coronavirus restrictions.

But the emergence of the Omicron variant towards the end of last year left many wondering whether a fourth national lockdown could be on the cards.

Mr Johnson refused to go further than his 'Plan B' measures, which include the mandatory use of face coverings, working from home and the introduction of Covid Passes, insisting that the booster vaccine programme would prevent the health service becoming overwhelmed.

Research suggests the Omicron variant causes a less severe disease than Delta, but fears remain over its transmissibility and how quickly hospital beds are filling up as a result.

Mr Johnson has suggested that the struggling NHS will just need to 'ride out' the Omicron wave.

As the health service struggled with the pressure over the last week, with several trusts declaring critical incidents amid high staff absences, Mr Johnson has also had to face up to allegations around the refurbishment of his Downing Street flat after it emerged that messages from his mobile phone had not been handed over to investigators.

The prime minister issued an apology to his ministerial standards adviser for failing to disclose the messages he sent to a Tory peer over the funding of the refurbishment.

In December the Electoral Commission issued a £17,800 fine to the Conservative Party after ruling that it had not followed the law over donations by Lord Brownlow to help cover the renovations, with costs exceeding £112,500.

The scandals surrounding Westminster are also putting a strain on relationships with devolved governments in the rest of the UK.

Conservatives in Scotland are concerned that the string of mishaps in Downing Street is likely to cost them seats this year.

Mr Duncan, who was Scotland’s only Tory MP between 2001 and 2005, wrote in the Sunday Times earlier this month: “After a devastating sequence of disastrous missteps this autumn, from Owen Paterson to Downing Street parties, from northern rail U-turns to Covid strategy division, the PM heads into 2022 under pressure like never before.

“And, once more, it’s hurting the Conservative cause in Scotland.”

Meanwhile in Wales, a poll suggested the Tories could lose around eight parliamentary seats at the next general election.

Polling expert Professor Roger Awan-Scully, of Cardiff University, said: “These figures suggest the recent decline in the Britain-wide poll ratings of the Conservative is being mirrored here in Wales – our latest estimate puts the Welsh Tories fully 10 points below the level of support that they secured in the December 2019 general election.

“Labour’s position, by contrast, appears to be very solid, while Plaid Cymru appear to have slipped back after an unusually strong showing in our autumn poll."

A fresh start in 2022 will be tricky for the prime minister as fall out from the previous year follows him back into Parliament.

During his first Prime Minister's Questions session of this year, Mr Johnson was quizzed over how he plans to tackle the cost of living crisis, which is predicted to see energy bills soar again in 2022.

The spike in gas prices late in 2021 has pushed the issue higher up the political agenda and it is likely to be a leading concern for voters as prices continue to rise.

Economic think tank The Resolution Foundation has warned that millions of families are facing a “cost-of-living catastrophe”.

The Bank of England predicted that inflation would peak at 6 per cent in April – the highest since March 1992 and three times its 2 per cent target – while continued supply chain difficulties will mean more shortages and higher prices.

With this as a backdrop, it could prove tricky for the Tories to deliver on their election promise of 'levelling up' the UK.

The government is expected to publish its long-awaited levelling up White Paper in 2022, outlining its key policies for investing in communities that have previously been left behind.

However, despite it being seen as the government's flagship strategy, around a quarter of Brits (24 per cent) have never heard of 'levelling up', according to a recent YouGov survey.

Another 50 per cent have heard the term but either have no idea what it means or are not completely sure. Only a quarter (26 per cent) said they knew exactly what levelling up means.

Michael Gove is now overseeing the Cabinet portfolio for Levelling Up, Housing and Communities following a cabinet reshuffle back in September, putting the policy at the forefront of his department.

Mr Gove said he was “thrilled” to be taking on the levelling up agenda, which he described as “the defining mission of this government”.

“With a superb team of ministers and officials in a new department, our relentless focus will be on delivering for those overlooked families and undervalued communities across the United Kingdom,” he said.

“We have a unique opportunity to make a real difference to people’s lives.”

Whether it will be enough to win over voters remains to be seen.

But how safe is the prime minister's position at the moment?

For a vote of no confidence to be triggered, more than 15 per cent of his own MPs have to officially voice their concerns about the party leadership.

So that would happen if 54 Tory MPs submitted letters to the chairman of the 1922 Committee, Sir Graham Brady.

In November, reports suggested that a number of letters of no confidence had already been sent to the committee, while in December, Roger Gale became the first MP to publicly confirm that he had sent a letter to the chair.

However, the total number of letters received is kept confidential, and only the chairman knows how close to the tipping point we are.