Boris Johnson’s Conservative Party conference speech: Everything he said and how we’ve rated it 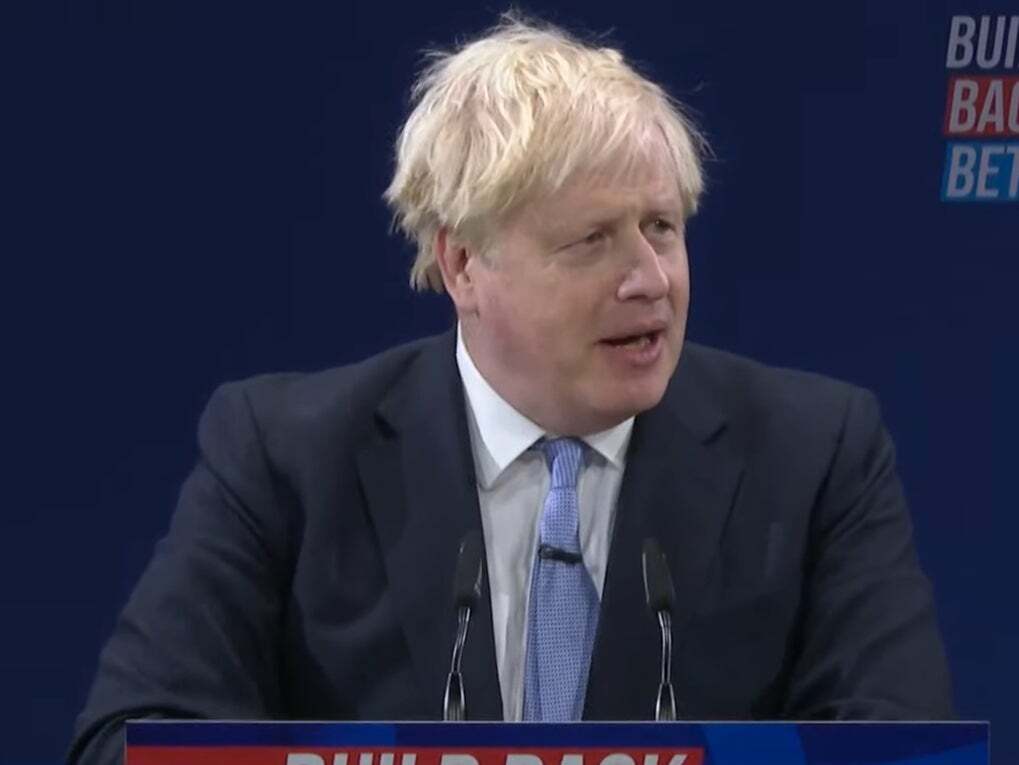 Boris Johnson has addressed his party at the 2021 Conservative conference.

After a conference season that has seen far too many politicians dancing, a fair few gaffes and errors - Dominic Raab - and some rather odd speeches from Sajid Javid and Priti Patel, the prime minister stepped out with all the triumph of a headliner at Glastonbury to pat his ministers on the back for their performance and to discuss the government’s upcoming policies.

Johnson is obsessed with building back better but was his speech inspiring or could he himself have done better?

“Good morning. Let’s get on with the job.”

The master of slogan politics didn’t even make it to three words before relying on one of his favourites. He frequently talks about how the government “gets on” but this was a bit too much.

“We sent that corduroy communist cosmonaut into orbit where he belongs”

In what soon turned out to be an alliterative quip heavy speech, Johnson made his first dig at Corbyn - a man who hasn’t been the Labour leader for 18 months - by calling him a “corduroy communist cosmonaut”. We can think of more flattering nicknames.

“We sent top government representatives to our sweatiest boites de nuit to show that anyone could dance. Jon Bon Govi!”

His next joke, and there were many, was about Michael Gove and his infamous nightclub appearance earlier this summer. Johnson joked that he sent Gove to the club to show people it was safe to be in crowded spaces after lockdown.

“After decades of drift and dither this reforming government this can do government that got Brexit done, is getting the vaccine rollout done, is going to get social care done.”

Having got a couple of laughs out the audience, Johnson was finally ready to be serious (ish) and started speaking about policy. He said it was right to increase national insurance contributions to fund the NHS and praised it for its work during the pandemic.

The government will “fix” health and social care, whatever that means, Johnson said.

There is “no reason why the inhabitants of one part of the country should be geographically fated to be poorer than others”.

After repeating his argument that Britain should “invest” in people in the country rather than relying on immigrants, Johnson started blathering on about “levelling up” and despite this, we are still none the wiser as to what it actually means.

Perhaps it is about regional inequality, given these remarks on it, but he also defined it in numerous other ways including building hospitals so if you find out, let us know.

For a government that is strong on punchy slogans that galvanise voters (see ‘get Brexit done’), this one needs serious work.

“In Islington... they like kids to run races where nobody actually wins. I don’t think that is a good preparation for life let alone the Olympic games.”

Johnson spent a remarkable amount of time to his speech attacking the Labour Party, making it seem as if it were the Tories that are in opposition. Eton and Oxbridge educated Johnson, of course, used to live in the very Islington he attacks and the hypocrisy was as irritating as it always was.

Later, he claimed Starmer’s position on drugs came “straight from the power room of North London dinner parties” and said that in his conference speech he came across like a “seriously rattled bus conductor” who was “flapping with all the conviction of a damp tea towel”.

Johnson used to be a journalist and perhaps that is where he should have stayed.

“Transport is one of the great leveller-uppers”

If we needed proof that levelling up is a meaningless half-baked phrase, this would be it...

Johnson literally says this at every edition of Prime Minister’s Questions. Is he not bored? We are.

“We have persuaded the Americans to import prime British beef, a market already worth £66m. Build back burger.”

Over the last few days, Johnson has made a number of jokes on social media on the theme of his slogan - one of his slogans we should clarify - build back better. What he failed to mention with this particular joke, is that the US UK trade deal wasn’t the great success he had hoped it would be. But hey, burgers.

“We really are at risk of a cancel culture know nothing iconoclasm and so we Conservatives will defend our history and cultural inheritance.”

It wouldn’t be the Johnson Tories if there wasn’t a joke about the nebulous culture wars and how “woke” the country is. The comment was thrown in at the end as if he was ticking off something on his Tory populist bingo card just to get his party on side but it wasn’t quite as bad as Jake Berry’s comments...

The speech rumbled on. Johnson then spoke about improving housing, encouraged people to return to their offices and made a swipe at Insulate Britain protesters. He then made a few comments about climate change and spoke again about how great the UK’s vaccine rollout has been.

Unlike Starmer, Johnson spoke to a united room. He was spurred on by cheers not heckles and seemed in his element as he delivered joke after joke and interacted with the audience with some bizarre call and response bits.

But Johnson is not a comedian, he is the prime minister. So it was a shame the speech was thin on policy and thick on banter. He jumped from theme to theme like someone with their cue cards out of order and spent far too much time attacking Labour and delivering historical anecdotes.

Starmer vs Johnson is a battle of substance versus style, as many commentators have pointed out. But if Johnson wants his premiership to be remembered for anything else but loquacious waffle, he himself will need to level up.

Here’s what other people had to say about it:

Just come here to point out that the guy called Boris Johnson who is mocking 'lefty Islington lawyers' lived in Islington for 20 years - and was er married to a lawyer. #cpc21

But it underlines the hole Starmer has dug for himself: Johnson painted him as a chameleon and Labour as a party at war, both because Starmer abandoned his promises

Incredibly powerful speech from @BorisJohnson - human, funny & such a strong argument at its heart about the future of our country. 🇬🇧

Boris Johnson evoking the "spirit" of the England team at the Euros as something that makes Britain great.

The England team that his government said fans could boo.

Boris Johnson now squats like a giant toad across British politics. He has expanded the Overton window in both directions. Praising bankers and drug companies, while tight on immigration and woke history. Cheered for lauding the NHS and pro LGBT. Where does Labour find a gap?

When the country desperately needs a serious, competent, honest Prime Minister - we basically have an after dinner speaker #CPC21

Thoughts with anyone trying to live blog this mess #CPC21

Boris Johnson, who put the Islington townhouse he shared with his lawyer wife on sale for £3.75 million, mocks well-off "lefty Islington lawyers.” #cpc21

We are now at the Churchill stage of things, if you were wondering #cpc21

No major announcements in the speech; a bit on money to attract science & maths teachers to places where they are needed. Bit on tougher sentences for violent sexual offences. But speech really about mood #CPC21

A strong speech from @BorisJohnson to round off #CPC21. We were elected in 2019 on a mandate to level up areas of 🇬🇧 that have been left behind, and despite the challenges of Covid 19 we are building back better and #GettingOnWithTheJob

2021 conference season was a tale of two speeches: Starmer's, heavy on policy, earnest, this is me & my background, and Johnson's, very light on policy, crowd-pleasing, broad brush. Substance versus style. Pantone 2161 shades versus primary colours. Which one can win an election?