New photographs which appear to show the Prime Minister drinking as part of a group in Downing Street while coronavirus regulations were in place has cast doubt on claims that he was unaware of rule-breaking in No 10 during the pandemic. Four images obtained by ITV News are reported to show the Prime Minister raising a glass at a leaving party on November 13, 2020, with at least seven bottles of alcohol as well as party food on the table in front of him.

While the images have blurred-out others present the Prime Minister is clearly drinking with several people at the time the photos were taken. ITV claim the photos were taken at a gathering in honour of the Downing Street’s then director of communications Lee Cain with eight people pictured standing closely together as well as the photographer.

The broadcaster also reports it understands there were other participants out of shot at the party despite the rules at the time only allowing two people from different households to mix indoors in England. In several of the photographs Mr Johnson appears to be making a speech and raising a toast with half a glass of fizz in his hands.

Read more: When will Sue Gray's Partygate report be published and what is in it?

The photos appear to show the Prime Minister's red box on a nearby chair and on the table next to him are two bottles of champagne or cava along with four bottles of wine and half a bottle of gin. At that time parties with people outside of your household were banned with England in lockdown due to soaring Covid cases.

ITV News said it decided that it was in the public interest to publish the photographs despite being unable to reveal the identities of all the participants. The photographs also raise questions about Mr Johnson's repeated claims in the House of Commons and elsewhere that all rules were followed in Number 10 and that he had been unaware of any law-breaking parties.

On December 1 last year he told MPs “all guidance was followed completely in Number 10”. And December 8 he again told MPs: “I have been repeatedly assured since these allegations emerged that there was no party and that no Covid rules were broken” before stating in a Downing Street press conference later that day that “all the evidence I can see is that people in this building have stayed within the rules”.

The photographs have emerged as Sue Gray finalises her internal report into the alleged culture of partying in Number 10. It is thought that she may also publish pictures of several events when the report is made public as soon as this week.

It was also reported that top civil servant Simon Case will be particularly hard-hit by the contents despite the fact he was not fined over the scandal. It follows the conclusion of a separate inquiry by the Metropolitan Police into Covid rule-breaking events at the heart of Government, which saw a total of 83 people receive at least one fixed-penalty notice (FPN) each for attending events over eight separate days.

Mr Johnson received just one fine, for his 56th birthday gathering in June 2020 when indoor mixing was banned, along with his wife Carrie Johnson and Chancellor Rishi Sunak. Both the PM and his wife were later told by police they faced no further action, according to Downing Street, and Mr Sunak has not received an additional fine. 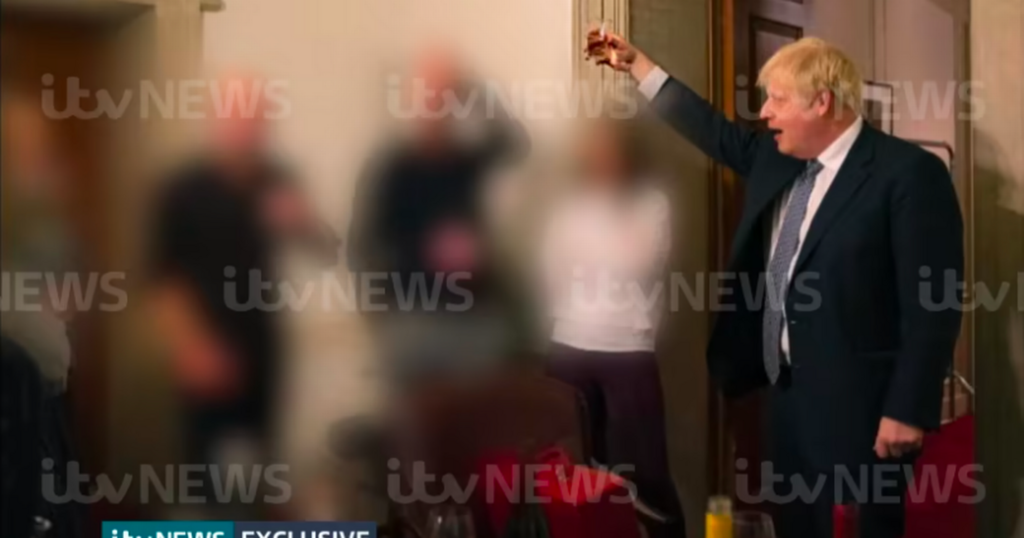 Boris Johnson pictured drinking at illegal party inside Downing Street during lockdown
Ahead of the publication of the Sue Gray report, pictures of the Prime Minister allegedly breaking lockdown rules at a…

PICTURES showing the Prime Minister drinking at a party during lockdown and raising a toast have been published.