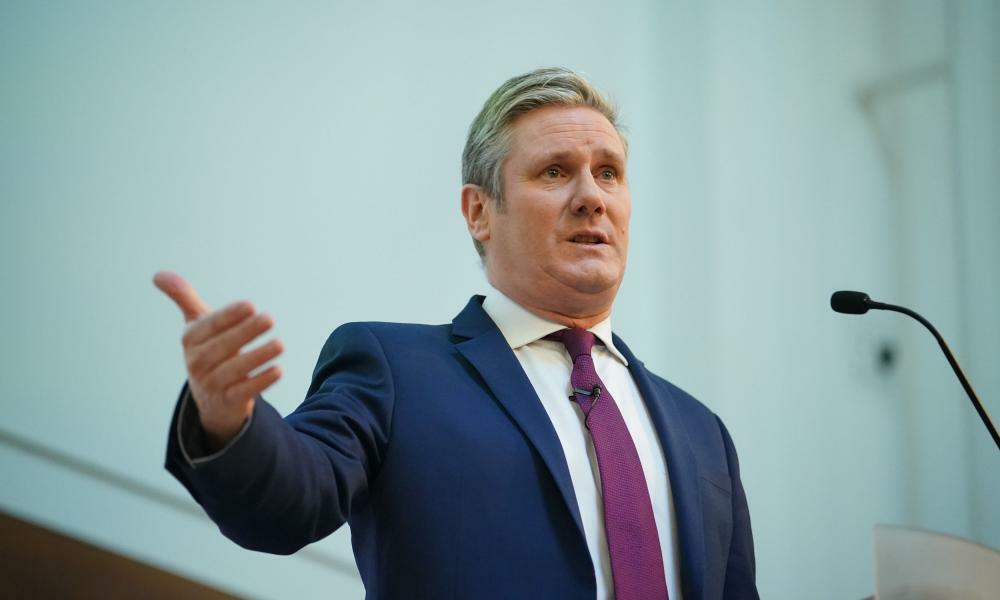 Keir Starmer has ramped up the pressure on Boris Johnson as the prime minister fights to save his job, arguing that it is in the “national interest” that he steps down as he is “unable to lead”.

In a speech to the Fabian Society conference, the Labour leader accused the Conservatives of running the NHS into the ground because they are “too preoccupied defending his rule-breaking”. Stressing that “waiting times were the shortest on record” when Labour left government 12 years ago, he said: “Rather than concentrating on getting through the pandemic and bringing down waiting lists, this self-indulgent Tory party is instead having a fight about a leader who they should have known from the start is not fit for office.”

“We are witnessing the broken spectacle of a prime minister mired in deceit and deception, unable to lead,” Starmer said, adding that it was “very important that the Tory party does what it needs to do and gets rid of him”.

Responding to questions after his speech, Starmer said the revelations about coronavirus rule breaches in Downing Street had exacerbated issues people were facing with their mental wellbeing.

He said: “I think, by the way, the scandal of partygate, for want of a better word … what’s happened in recent weeks, where it has become obvious that while the vast majority of the British public were obeying the laws the government made, the government and the prime minister were partying in Downing Street. I think that has added to mental health stress because so many people are now asking themselves: ‘Why on earth did I do that then, while they were doing what they were doing?’”

The opposition is not alone in calling for Johnson to step down over rule-breaking after his public apology to the Queen on Friday for the parties that took place on the eve of her husband’s funeral.

On Saturday Tobias Ellwood, the chair of the defence select committee, said that “we need leadership” and Johnson must “lead or step aside”.

Asked about the emerging claims of regular “wine-time Friday” gatherings in No 10 despite restrictions, Andrew Bridgen, the MP for North West Leicestershire and a former Johnson ally, repeated his calls for the PM to resign, telling BBC Breakfast: “It doesn’t matter whether the prime minster was present or not present – ultimately, he is responsible for what goes on in the government, he’s responsible for the culture in No 10 and what we’re seeing is a culture where there’s one rule for them and the rest of us do what we’re told.”

He later told Sky News that Johnson’s future as prime minister was “untenable”.

He said he had received hundreds of emails from his constituents about the issue.

“We had 150 emails regarding the prime minister’s position. We cleared them down … and by midday there were another 168.”

He said there was a “pattern of behaviour that the inner circle can do what they want and the rest of us have to what we are told”.

“The prime minister needs to do the honourable thing and call it a day for the good of the country.”

The claims of end-of-week drinks being held during a time when indoor household mixing was prohibited were reported on Friday evening by the Mirror, which said that Johnson knew about the socialising and that staff invested in a special drinks fridge.

A No 10 spokesperson said: “There is an ongoing investigation to establish the facts around the nature of gatherings, including attendance, setting and the purpose, with reference to adherence to the guidance at the time. The findings will be made public in due course.”

However, the prime minister is reportedly preparing a plan to stay in the job in which top officials may be sacked instead of him. First reported by the Independent, the drive has been dubbed “Operation Save Big Dog” by Johnson himself, and could involve his chief of staff, Dan Rosenfield, and his private secretary and author of the infamous “bring your own booze” email, Martin Reynolds, being asked to take the hit for the scandal, which has caused the Tories to plunge in the polls.

The relaxation of Covid restrictions is another avenue being considered by Johnson in the fight to salvage his position. The prime minister has been in contact with the political strategist Lynton Crosby, according to a report in the Telegraph, and will seek to limit the fallout from “partygate” by lifting plan B measures, such as work-from-home guidance, at the end of the month. The restrictions are due to expire on 26 January subject to a review.