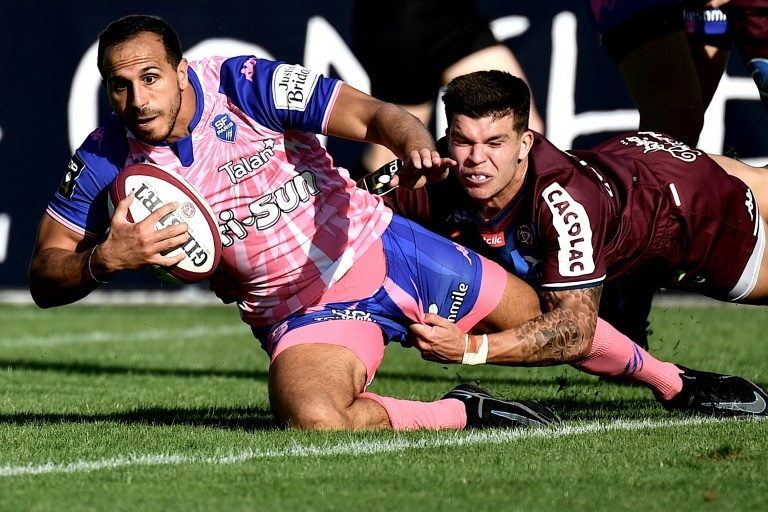 Lam, 30, scored seven tries in his first campaign at Stade Chaban-Delmas last term and crossed midway through the second-half to help his side to their first win of the season.

France fly-half Matthieu Jalibert impressed by kicking 15 points and set up Samoa centre UJ Seuteni with a sublime off-load but was shown a first-half yellow card for an intentional knock-on.

Australia hooker Tolu Latu went over from a rolling maul for the Parisians who lost a second straight game after last weekend's derby defeat by Racing 92.

Lam suffered a knock to his head in the closing quarter of an hour and played the closing moments with a black headband.

Jaminet, 22, made his maiden first-division appearance after impressing on his Les Bleus debut on this summer's Australia tour and was instrumental in helping the Catalans grab their opening win of the season in the second round of the campaign.

Ex-New Zealand centre Francis Saili and former Australia winger Henry Speight were yellow carded within the opening quarter of an hour for the away side after two separate shoulder charges.

"We managed the numerical superiority well.It did us a lot of good," Perpignan backs coach David Marty told reporters.

"Happy, I'm not sure, more relieved.The pressure made it difficult.When we managed to grow our lead we could relax and try things," he added.

French back-rower Kevin Kornath crashed over in the 77th minute as Castres overcame Clermont 34-30 to go top of the table.

Earlier in the day Castres players were filmed lifting and moving a car on their way to the stadium as it had blocked their team bus.

"It confirms not just the work since the start of this season, but the work carried over from last season.It's great.Two wins from two is brilliant."

More than 12,000 fans saw Foursans' mature performance from the boot without paying as president Mohed Altrad gave tickets away for free for their opening home game of the campaign.

On Sunday, champions Toulouse host Toulon, who are set to hand Fiji's Olympic gold medallist Jiuta Wainiqolo a debut as English 21-year-old Harrison Obatoyinbo starts his first Top 14 game on the opposite wing.

The home side's flanker Anthony Jelonch, who captained France during July's series loss to the Wallabies, is named on the bench for his new club after moving from Castres during the summer.