Strengthening ties with the Pacific is a priority for the Biden administration, says a top US diplomat, while warning the region faces a struggle from countries that seek to coerce and pressure the Pacific Islands family.

US Deputy Secretary of State Wendy Sherman travelled to the Solomon Islands capital of Honiara as part of an inter-agency delegation to attend a memorial for the 80th anniversary of the Battle of Guadalcanal.

In a speech Ms Sherman gave at the US-hosted event in Skyline Ridge, the site of the US Guadalcanal Memorial, she said the US was committed to "reinvesting" in their relationship with Pacific partners "to address the challenges" of the coming decades.

"President (Joe) Biden has made solidarity with the Pacific Islands a priority for his entire administration from the very beginning," she said.

"We see cooperation with the Pacific Islands as absolutely critical to the future of the entire region."

In a seeming reference to the mounting tensions with China in the region, as well as current conflicts in Ukraine and elsewhere, Ms Sherman criticised world leaders who used "coercion, pressure, and violence" as tools to disrupt peace.

"We have seen around the world... [leaders] who seem to have forgotten the awful lessons learned here, or perhaps never took them to heart in the first place," she said.

"Today we are once again engaged in a different kind of struggle — a struggle that will go on for some time to come."

Ms Sherman said it was "up to us" to realise a future defined by shared values and vision for a "free and open, and prosperous and secure, and above all peaceful Indo-Pacific".

Also present at the event was the US ambassador to Australia Caroline Kennedy.

She paid respect to Solomon Islanders who had "risked their lives" to help the allied forces hold Guadalcanal during WWII.

Ms Kennedy said countless Americans and family members of allied personnel have the Solomon Scouts and Coastwatchers to thank for the survival of many during the war.

This also included Ms Kennedy's father, former US president John F. Kennedy, who had served as a captain on a patrol torpedo boat in the Solomon Islands during WWII and famously helped save the lives of fellow crew members after the ship sank.

Mr Kennedy and the other survivors were later spotted by Australian Coastwatch unit and rescued from a nearby island by two Solomon Islander scouts.

She said she was "deeply touched to be here today, knowing that I might not be here if it were not for Biaku Gasa and Eroni Kumana", referring to the two Solomon Islander Scouts who had saved her father's life.

The ambassador heard first-hand details of her famous father's lucky escape, during a tour of the Australian War Memorial in Canberra last week.

The six-month battle, which claimed the lives of more than 25,000 allied and Japanese servicemen, marked a turning point in the allies' war in the Pacific and showed the strategic importance of the Solomon Islands.

Ms Sherman's own father, Mal Sherman, served as US Marines during World War II and fought in the Battle of Guadalcanal.

Ms Sherman is currently on a tour of the region as part of the US's re-engagement in the Pacific. Earlier in the week, her delegation visited Samoa and Tonga, where the US has expressed an interest to establish an embassy in the Tongan capital, as well as in Kiribati and Solomon Islands.

After the memorial event, she met with Solomon Islands Prime Minister Manasseh Sogavare to discuss topics including bilateral cooperation on tackling COVID-19 and poverty, as well as the opening of a US embassy in Honiara.

She is expected to next travel to Canberra to meet with Foreign Minister Penny Wong to discuss bilateral trade and the combating of climate change. 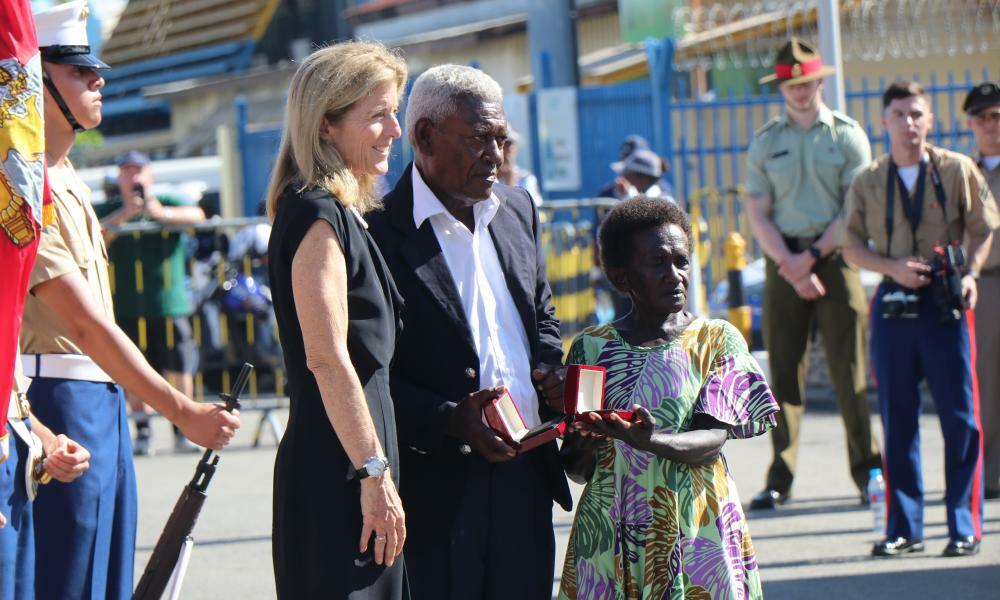 The Guardian - AU
From analysis to the latest developments in health, read the most diverse news in one place.
US diplomat says Solomon Islands leader ‘missed important opportunity’

The US deputy secretary of state has said the prime minister of the Solomon Islands “missed an important opportunity” by failing to attend a memorial service to mark the anniversary of a key Second World War battle.

Senior government and military officials from Japan and the United States on Sunday vowed to strengthen cooperation with the Solomon Islands amid increasing Chinese influence, as they gathered in the capital Honiara to mark the 80th anniversary of the World War II Battle of Guadalcanal.

United States Deputy Secretary of State Wendy Sherman has reassured the Pacific region the Biden administration is watching closely as the security pact between China and the Solomon Islands takes shape, warning a military base on the islands would "create security concerns for all".

U.S. President Joe Biden sees strong ties with Pacific Island countries as a priority, Deputy Secretary of State Wendy Sherman said in the Solomon Islands on Sunday, underscoring the stakes of her visit as tensions have been mounting in the region.

Reuters
One place to find news on any topic, from hundreds of sites.
US warns Pacific islands of struggle against coercive regimes

Honiara (AFP) - A top US diplomat warned Pacific Islands of a new struggle against violent power-hungry regimes Sunday, as she visited the Solomon Islands to mark the 80th anniversary of World War II's Battle of Guadalcanal.