Book of the Week: Whorehouse confidential 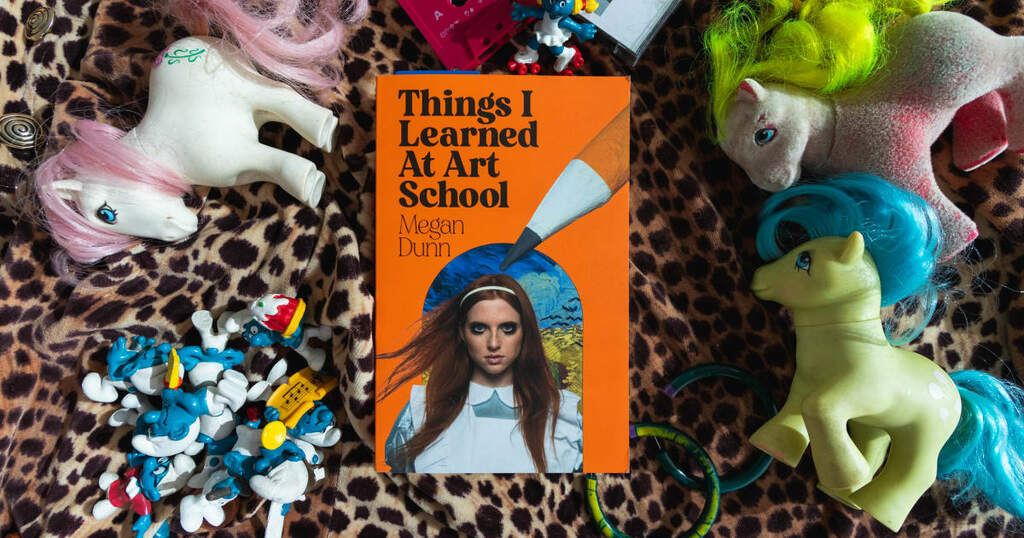 The best part of Megan Dunn’s second book, Things I Learned at Art School, which is a sort of comic memoir about her childhood, her time at art school and the years she spent in the art world, is the section that starts with a chapter titled “Nine Months in a Massage Parlour Called Belle De Jour”. We are in Auckland in the 1990s. Dunn is in her twenties and is ostensibly a video artist, but she has taken a night job as a receptionist at the Belle De Jour. It appeals to her sense of kitsch or irony, a point of view that was pretty common in the art world at the time. It was about the fun of slumming it, or cerebral enjoyment of the knowingly trashy, and not just in art’s ivory towers, but almost everywhere in the 90s (see also: loaded magazine’s “for men who should know better” tagline or The Modern Review’s “low culture for high-brows”).

You could say we are a long way from the art world, but really, we are just around the corner from it. Belle De Jour was located off K’ Road, which was becoming populated with galleries, as though the art world was nourished by exposure to the genuinely seedy. Dunn also thought a tacky place like this might offer some good material. It could have camp appeal. But the reader becomes aware that something unexpected is happening. Art work, we learn, is much more trivial than sex work. The characters you meet at the Belle De Jour are more well-rounded, more honest, even if they probably aren’t using their real names. They are more fully described; they have depth.

The chief character is Holly, who Dunn describes as a bona fide femme fatale, but Chantelle makes a brief appearance: “Chantelle, one of the new girls, was a hard-working mum of three kids, as salt as [sic] the earth as they come. Her face was stuck in the eighties, her hair teased. One night Holly gave her a makeover in the girls’ room and Chantelle walked back into the bar, smouldering, a femme fatale … from a dairy farm outside Auckland, who had to milk the cows when she got home at dawn.”

Holly snorts speed before her shifts; Charlie is on the nod in the lounge (this is turning into a Lou Reed song). Artists have sometimes posed as the marginal, the deviant and the overlooked, but this was the real thing. The passages that take us behind the scenes at the Belle De Jour are told with humanity, understanding and humour. Later on, Dunn gets a job as a barmaid at Showgirls, which seems much tackier and more depressing, a booze barn with none of the dated atmosphere of the K’ Road strip clubs that were watched over by “the goddess of K’ Road, the Vegas Girl”, who seemed to “advertise night itself, perpetually on call to dish out a fresh quota of sin”.

She has an appealing mix of wisdom and humour, reminiscent of...humorists like David Sedaris

Dunn has a natural comic voice, and a talent for self-deprecation (chapter titles include “Women Who Watched Room with a View Too Much”, “CV of a Fat Waitress” and “Various Uses for a Low Self-Esteem”), but like most intentionally funny writing, her prose can seem glib if it doesn’t have something big to grapple with. The massage parlour world is one of those big things. Her solo mother’s love life is another. Again, this part is related with an appealing mix of wisdom and humour, reminiscent of the ways that potentially embarrassing family stories are told by humorists like David Sedaris.

She writes: “Mum fell in love at thirty-seven years old. At the time we still lived in the granny flat above the manor. She had it bad. He was a musician: potentially the worst kind of man to fall in love with though neither of us knew that then. He played in a rock’n’roll band. He had a guitar and a purple van. Purple was Mum’s favourite colour but that was just a coincidence.”

He was a musician with a personalised license plate. It read HOT 2 GO. “I thought Mum’s boyfriend was a dork."

An 80s childhood shaped by the alien sitcom ALF, the Smurfs, The Clan of the Cave Bear and the Daryl Hannah mermaid comedy Splash somehow led to art school, where Dunn produced video art. Someone in the 90s once said there were two types of artists: those who go to the art supplies shop and those who go to Surplustronics. Dunn was a third kind: she raided the shelves at Video Ezy. One of her video works merged a goldfish sequence from Disney’s Fantasia with footage of Kim Basinger in the erotic thriller 9 ½ Weeks, set to a soundtrack by the Doors. How was it received? “Projected on a white wall in the inner cavern of the emerging artists exhibition at Artspace, the video took on a new life, innocent and sexy, lurid and ridiculous. The art scene loved it. It seemed to mean something but no one knew what exactly — hence it was art!”

All the self-deprecation can wear a bit thin, though. This was a time of irony, postmodernism, pastiche and all that, but the art world sections of Dunn’s book suggest that she took almost nothing seriously. Her own work especially. “Irony now has a bad name in art, but in the nineties it was a word that could be used without shame,” she writes. Dunn co-founded Fiat Lux, one of two short-lived but still-remembered Auckland galleries that were centres of 90s art world irony (the other was Teststrip). Based on this account, the openings and parties were more notable than the art on the walls, or on the floor. There was an event when performance artist Peter Roche turned up with two chainsaws, which were sent spinning noisily across the gallery floor while terrified art fans watched from the footpath. Roche then grabbed the chainsaws, stepped outside and sliced through a couple of green bins put out by the Chinese takeaway shop next door. Was this an opening night stunt or was it the actual art?

“We got kicked out of Verona after David spilt an ashtray and a bottle of wine over an art dealer and his wife.” How 90s is that sentence?

Funnily enough, Dunn’s undoubted skill as an art writer isn’t really on display in this book, as if she is afraid the ordinary reader will be scared off. So much of the art world she describes here seems ephemeral now. In a pre-internet age, it barely left a trace behind. There was also a lot of serious drinking in the ironic 90s. Dunn and her Fiat Lux collaborator David Townsend watched Less Than Zero and did their best to live by it: “We got kicked out of Verona after David spilt an ashtray and a bottle of wine over an art dealer and his wife.” How 90s is that sentence? Other long-gone Auckland institutions are named: Dunn waitressed for a time at Ponsonby’s legendary Alhambra, described as the home of “booze-hounds and deep-seated cynics with bad dispositions, too much intelligence and nothing better to do with it”. Which is accurate.

There’s no success like failure, as a great songwriter once sang. It was some time before Dunn realised she wasn’t destined to be an artist, or even a waitress, but a writer. Her first book, Tinderbox, was a short, funny book about her failure to rewrite Ray Bradbury’s Fahrenheit 451 from a woman’s point of view. Along the way it was also a book about two other failures: the failure of her marriage and the failure of the giant Borders bookselling chain that employed her. Failure was transformed into success and Tinderbox was published by Galley Beggar Press in the UK, becoming a cult favourite in the process. It was pitched just right, between intelligent self-awareness and self-mockery. Things I Learned at Art School is an unofficial prequel to Tinderbox.

Her second book was supposed to be about women who work as mermaids, and she even had a snappy title ready to go: I’ve Heard the Mermaids Skyping appropriated the Canadian film from the 1980s, I’ve Heard the Mermaids Singing (or maybe it’s from TS Eliot). She won a writer’s residence at the Surrey Hotel in Grey Lynn on the back of a proposal which included, and this may also have been self-deprecatory, references to climate change and the 21st century precariat. The hotel has a pool and I’m pretty sure there were photos of Dunn splashing about in a mermaid tail.

It was a nice gag, but the mermaid book was beached: “When my publisher saw my first draft, it was an epic flop. But she liked the parts about me.” On reflection, the publisher was right to push Dunn further towards personal disclosure, and turn another failure into success. The closing chapter, in which Dunn negotiates the biggest subject of them all (“Art in the Waiting Room”), is genuinely moving, as she drops the glibness that threatens to take over some earlier sections to share something heartfelt and powerful.

Things I Learned at Art School by Megan Dunn (Penguin, $35) is available from nationwide bookstores operating in Level 2.