Brazil's Bolsonaro says striking truckers to stand down on Sunday 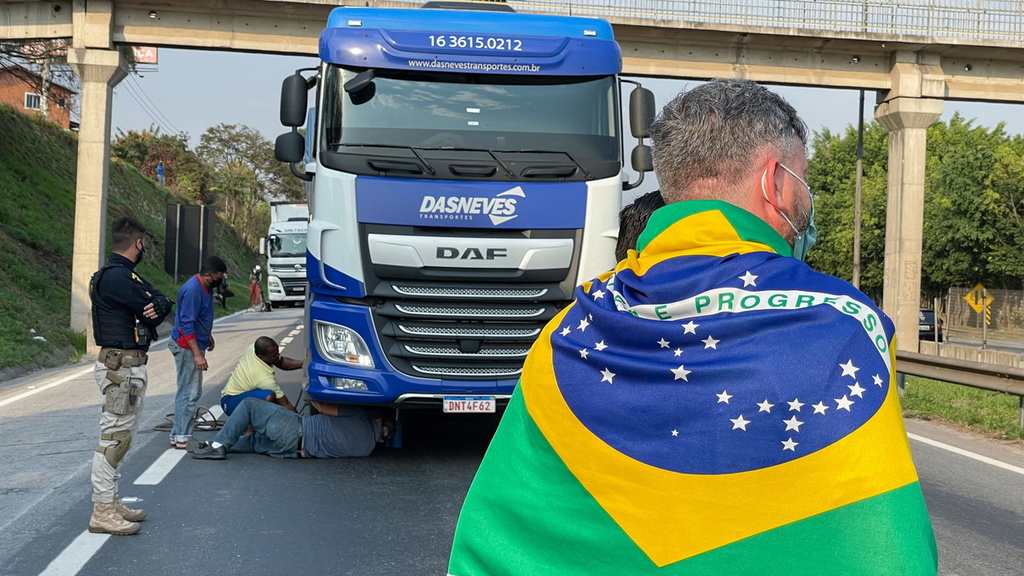 Brazilian President Jair Bolsonaro said on Thursday that allied truckers protesting on highways across the country had agreed to stand down on Sunday, a move that could bring significant relief to global commodity markets.

In a live weekly broadcast on social media on Thursday evening, which occurred after the right-wing leader met with truckers leading pro-government blockades, Bolsonaro called the protesters "fantastic." But, he said, he had told them that if the protests continued past Sunday, it would bring about "extremely serious" supply shortages in Latin America's largest nation.

Stirred up by the far-right leader's call to action against the Supreme Court at political rallies Tuesday, the truck blockades gained steam on Wednesday as Bolsonaro was slow to push back against a key segment of supporters.

Bolsonaro's account appeared to contradict that of at least one leader who met with the president. Truck driver Francisco Burgardt said earlier in the day that Bolsonaro did not ask them to end the protests.

He added that the truckers would only free the highways if they were received by the head of Brazil's Senate, Rodrigo Pacheco, who last week refused an unprecedented request by Bolsonaro to impeach a Supreme Court justice.

"We are mobilized for liberty and the freedom of expression," he told reporters, repeating Bolsonaro's claims against Supreme Court decisions.

By Thursday afternoon, the federal highway police said it had cleared all blockades, but there was still congestion from the protests on federal highways in 13 states.

Grains traders said the blockades had not disrupted exports, but soy growers said shortages of inputs would push up their costs and the protests could delay crop harvesting if they did not end soon.

The protests pushed up transport costs for animal feed, Valdecir Martins, head of grain sourcing at a unit of the world's largest meatpacker JBS SA, said in a webinar.

Soaring diesel prices have contributed to nearly double-digit inflation in Brazil, hurting an economic recovery from the world's second-deadliest coronavirus outbreak and raising fears of a major trucker strike like one that paralyzed roads in 2018. This time around, truckers' discontent appears wider in scope, with strikers' demands often broadly aligned with Bolsonaro and against his enemies in the judicial and legislative branches.

Bolsonaro gained prominence in that year's presidential campaign with his early support for the truckers and he has remained sympathetic to their complaints of high fuel prices.

However, in recent days allied truckers put the president in a tight spot, casting their hard-line tactics as an extension of his showdown with the Supreme Court, including demands that specific justices step down or revert unfavorable rulings.

The analysts said the truckers had a "mixed agenda" and saw in Bolsonaro an ally who will confront the establishment.

The president, however, appeared to back down from his angry confrontation with the top court justices that has raised fears of a breakdown of Brazil's democratic system.

"I never intended to attack any branch of government," Bolsonaro said in a statement on Thursday seeking to defuse the dispute.

He said his strong language at the rallies came from "the heat of the moment" and that any problem with justices should be resolved in courts.

Brazilian grains export group ANEC said on Thursday the protests had not affected exports, but the blockades were a matter of concern and that they were counting on authorities to come up with a solution.

Meatpacker associations Abrafrigo and ABPA said the blockades had not affected movement of live or perishable cargo around the country.

Some truck drivers who stopped on major highways said they were forced to come to a halt by pro-Bolsonaro colleagues who had vandalized their vehicles to strand them in place.

Bruno Rodrigues, 32, who was shipping auto parts, said he was stopped one hour south of Sao Paulo at 4 a.m. by men who threatened to smash his windscreen with rocks.

"They slashed my tire. It's outrageous. If the stoppage had some benefit, OK, but they are hurting their own brothers on the road," Rodrigues told Reuters. He said he was losing time for deliveries and would have to pay for the tire repair out of pocket.