By Tom Phillips in Brasília 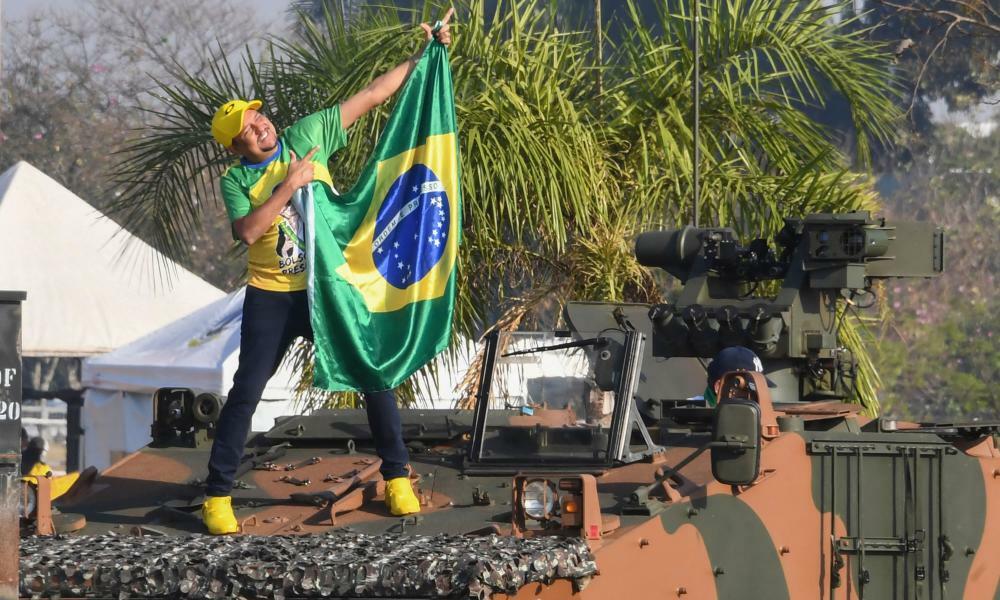 André Meneses made a gun sign with his hands to convey what he thought should happen to those who opposed Jair Bolsonaro’s project for Brazil.

“The right thing to do is put them on the wall and fucking … shoot them,” the 60-year-old protester declared on Tuesday morning as thousands of the Brazilian president’s most loyal supporters gathered in the country’s capital to celebrate their leader.

“They are traitors. They are traitors to Brazil,” Meneses said of the supreme court justices and leftist senators he claimed deserved to meet the firing squad for daring to thwart Bolsonaro’s plans.

“If I was the president I would do that … and I would sleep very well after their deaths, you know what I mean?” added Meneses, who had traveled nearly 2,000km from north-eastern Brazil to join the independence day rally in Brasília. “I hope you guys put it in your newspaper like this.”

Meneses was far from the only one voicing such extremist views on Tuesday, as throngs of Bolsonaristas hit the streets of Brazil’s biggest cities to show their support for a leader whose highly controversial presidency appears to be coming off the rails.

“We will support him wherever he is … Even if we need to pick up arms and die for Brazil then we’ll do that,” said Luis Bonne, a 50-year-old civil servant who was also among the thousands who had turned out.

All around him, on the boulevard leading towards Brazil’s congress and supreme court, lorries and pickup trucks – driven into the area hours earlier after clashes with police – were draped with banners calling for an immediate Bolsonaro-led military takeover in Latin America’s largest democracy.

“President Bolsonaro make an intervention. Our armed forces are committed to democracy and our freedom,” read one green and yellow sign brandished by a group of middle-aged women who were making gun signs with their hands outside the finance ministry.

Across the esplanade outside the defence ministry, a banner draped from the back of a truck demanded the cleansing of Brazil’s democratic institutions: the supreme court, congress and supreme electoral court.

In case the message was not clear to foreign visitors, a young female activist had penned a placard in French. “Monsieur Le Président,” it read. “Utilisez L’Armée.”

Other Bolsonarista demands were presented in awkward, exclamation mark-riddled English. “The limit has been crossed!!! Our indignation is huge!!! Jail for corrupts and communists!!!” read a white banner placed beside one of the numerous luxury SUVs that had been driven to the event.

Bonne said he had come to defend what he called Bolsonaro’s effort to rid Brazil of communist kleptomaniacs who were infiltrating their country.

“Brazil needed someone like Bolsonaro – not some namby-pamby mummy’s boy who wouldn’t get anything done,” he insisted.

“We needed a brute – a guy just like Bolsonaro. He’s capable of taking on these politicians who have been bleeding Brazil dry.”

The civil servant said he had no doubt his leader would be re-elected in next year’s election. “He’s the perfect president,” he said of the pro-gun populist. “I don’t believe in the possibility of the left returning to power.”

Polls, however, suggest Bolsonaro stands little chance of winning a second term in 2022, having outraged the majority of Brazilians with his radical discourse and chaotic, anti-scientific response to a Covid outbreak that has killed more than 580,000 citizens.

Opposition politicians dismissed Tuesday’s marches as a desperate attempt to resurrect the crumbling reputation of a politician whose presidency is fast running out of steam, amid rising hunger and economic pain.

“Bolsonaro’s ratings are in meltdown and with these rallies … he wants to show he’s still in the race. He’s trying to energize his base,” said Marcelo Freixo, a leftist congressman from the Brazilian Socialist party (PSB).

“It wasn’t the people who hit the streets – it was the fanatics,” Freixo added of what he called “absolutely criminal and unconstitutional protests”.

Jean Paul Prates, a Workers’ party (PT) senator, said Bolsonaro’s “terrible spectacle” was designed to create the illusion that the president still enjoyed widespread support when in fact most Brazilians now rejected him. “The majority will make their voice heard next year at the polls,” Prates predicted.

But as they marched through Rio, São Paulo and Brasília on Tuesday, hardcore Bolsonaristas were adamant reports of their figurehead’s political demise were being greatly exaggerated by the press.

“We believe in him,” said João Paulo Temporini, a 27-year-old lawyer, as he marched towards congress with a banner reading: “In Bolsonaro we trust.”

Meneses said he also had total faith in his leader and rejected the suggestion that the former leftist president Lula Inácio Lula da Silva might beat Bolsonaro next year, as polls suggest. “He’s the best president – in more than 500 years we have never had a guy like this. He’s an example for the world, you know what I mean?” he said of Bolsonaro.

Addressing the rally after flying over the crowd in a helicopter, Bolsonaro claimed those present would decide Brazil’s future direction.

“It says order and progress on our flag – and this is what we want,” Bolsonaro proclaimed, amid reports that Donald Trump’s former senior aide, Jason Miller, had been questioned by federal police investigating anti-democratic acts as he tried to leave Brasília after attending a rightwing summit organized by one of the Brazilian president’s sons.

“We do not want a rupture,” Bolsonaro insisted as he addressed his fans in Brasília.

But as his four-year presidency lurches towards its potentially dramatic final stretch, some fear the future might hold just that.

“It is truly dangerous that we have reached a point of such fanaticism and radicalism,” said Prates, the leftwing senator. “This is a moment of real apprehension.”